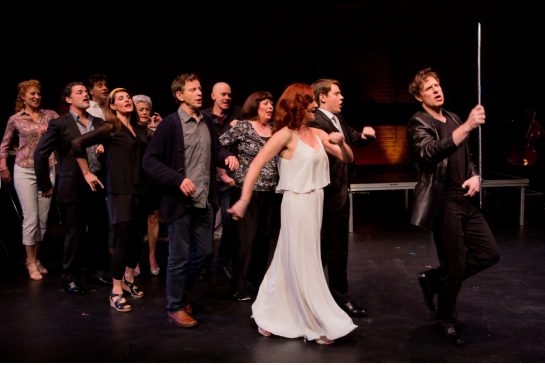 Theatre 20 occupies a very specific and somewhat strange space in Toronto theatre. They produce work very rarely but, when they do, it’s event theatre- a big musical with a top-notch cast; something worth dressing up and hiring a babysitter for. Company is their biggest show yet. My favourite Sondheim piece, the contemporary musical’s complicated score and large ensemble of memorable characters is the perfect platform for a company like this. When it was started, Theatre 20 got noticed because of their impressive roster of big-name Founding Members but, unlike say Soulpepper’s founding members back in 1998, they were mostly all too busy being big names to headline a bunch of shows out of the gate. It wasn’t until the cast of Company was announced that Theatre 20’s star power really came into play (Bloodless was fine and had some good actors but it was mostly forgettable). Brent Carver! Louise Pitre! Nia Vardalos! This might just be the craziest cast ever on a Toronto stage- star after star after star, side by side by side.

Now, the impressive all-star feel of the production does have its drawbacks. They’re all impossibly busy (including director Gary Griffin who was pulling double duty in Stratford) so the rehearsal process must have been severely shortened, or at least that’s what I’m assuming since these pros somehow seem a little under-prepared even for a sparse production. The choreo isn’t quite in sync, a few of the relationships feel a little less than lived in, and is it possible that a consensus was never reached on whether they’re supposed to freeze or engage with the scene playing as they sit at cocktail tables waiting for their next entrance? The audience also brings a ton of expectations in with them, baggage from every role they’ve seen each cast member play. My plus one, for instance, couldn’t help but think about how little she had liked Nora McLellan in Gypsy years ago when watching her charming but perhaps a bit miscast performance as Sarah in Company (it’s hard not to feel that more than a few of these talents were badly deployed).

But the exact same phenomenon worked in their favour with me, capitalizing on my pre-existing fondness for almost the entire cast. I’ve never seen so many of my favourite people together on stage, from Dan Chameroy who captured my eight-year-old heart in Stratford’s Camelot and has yet to let it go (related note: Dan Chameroy is ageing backwards), to current prolific favourite Jeff Lillico, to the nicest person I’ve ever had the pleasure to interview- the incomparable Steven Sutcliffe. Not to mention newly minted Dora winner Carly Street, engrossing as the adorably neurotic Amy, and Vardalos, the movie star who strikes the perfect balance of shining bright and fitting in with the ensemble (related note: have you re-watched My Big Fat Greek Wedding lately? It’s even lovelier than you remember). I’ve told you before that Brent Carver is made of magic but did I remember to write about how captivating Louise Pitre is? She’s ferocious, funny, and regal all at once, particularly here as Joanne playing opposite real-life husband W. Joe Matheson and delivering a “Ladies Who Lunch” with serious emotional punch and pent-up fury. The cast, despite a few hiccups, lives up to their names. It’s especially nice to see Chameroy get a really meaty role like Robert- something that shows off his voice (which has weakened in its upper register over the years but remains stirring) as well as his impossible charm and generally underused serious acting skills.

Among the few cast members I didn’t know going in, Lindsey Frazier’s Kathy is thoroughly winning, adding extra “what if” melancholy to her one big scene with Chameroy (a scene that rarely works for me but was a character-defining highlight here), but the breakout in my opinion has to be Marisa McIntyre as the self-professed “really very dumb” flight attendant April. She is intriguing and complex in a role that can very easily be caricature; natural and unassuming in a piece that can very easily be cheesy (and occasionally is elsewhere in the same production). I didn’t love Eliza-Jane Scott and David Keeley as Susan and Peter (in all fairness, they’re by far my least favourite couple as written so they were starting at a deficit compared to, say, Carver and McLellan as my favourites Harry and Sarah) but it was really only Cleopatra Williams’ over-performed, under-sung version of Marta who really drove me crazy.

Music director Scott Christian and his band are wonderful, especially considering the thoughtful orchestral reductions Christian was required to work out, and the simple set with surrounding cocktail tables for the “off-stage” characters strikes the perfect tone even if it’s a bit of a cheat. Beyond that clever idea, director Gary Griffin doesn’t bring much to the table at all, he just leans on his all-star cast and Stephen Sondheim (whose creation is, unlike its star, definitely ageing). But that’s sort of the point of a cast like this- no one is coming to see anything but them. This game was won on draft day.