On Stage in Toronto: Musical Autobiographies 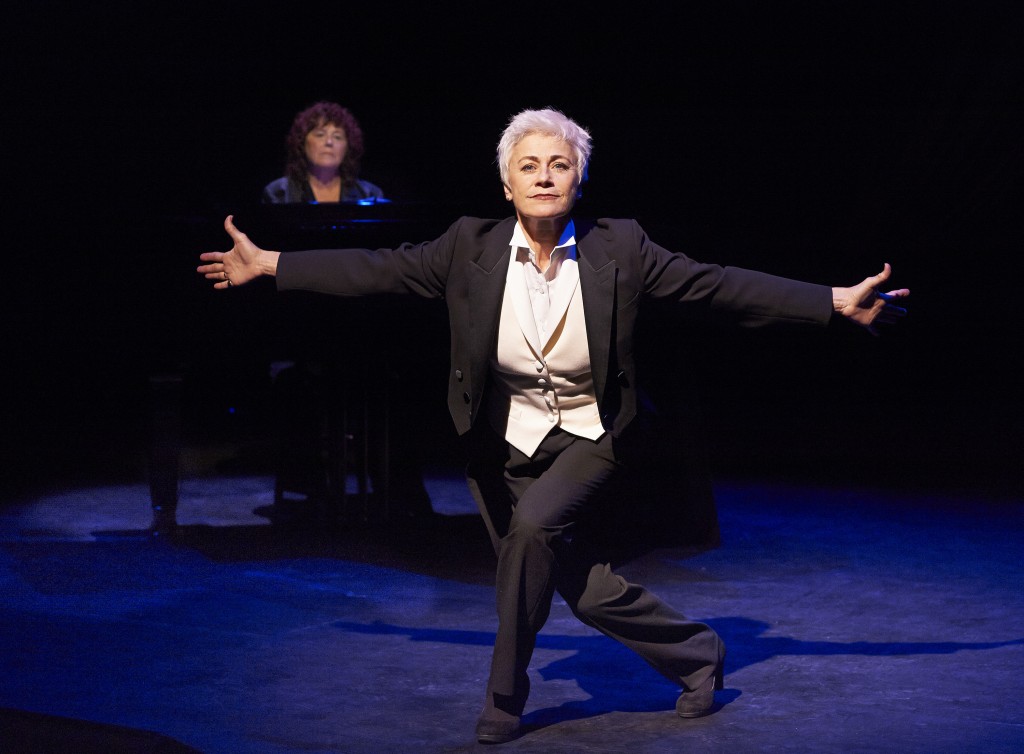 Last week, two excellent productions opened in Toronto that each told the story of a fascinating musical theatre artist through songs they composed themselves.

The first was On the Rocks, a limited engagement cabaret-style showcase of Canadian musical theatre great Louise Pitre. Accompanied by the superb Diane Leah at the piano, Pitre took to the Passe Muraille stage to tell the sometimes fascinating, sometimes commonplace story of her life through original songs. Said original songs range from slightly corny (the reprising mantra “If I Can See It”) to remarkably moving (the melancholy “Please Please Please”) to funny and sweet (the show-ending title song, which serves as a sort of encore after Pitre’s grand exit but is so charming that I didn’t care that it seemed out of place). The story itself- filled with some hardship, plenty of triumph, and an excellent number of relatable choices- has only a few really big emotional punches (the best being Pitre’s account of coming into the rehearsal hall in New York on Sept 12, 2001 and having to choose between singing and crying “them both coming from the same place”) but the love story that ties it all together is a lovely one; the tenderness with which Pitre speaks of her husband Joe is truly affecting. The real treat of On the Rocks, though, is simply seeing Pitre up close and personal. She’s an immensely charismatic performer with an intoxicating alto and delivers a fantastically passionate performance. Also, her new short haircut is fabulous. 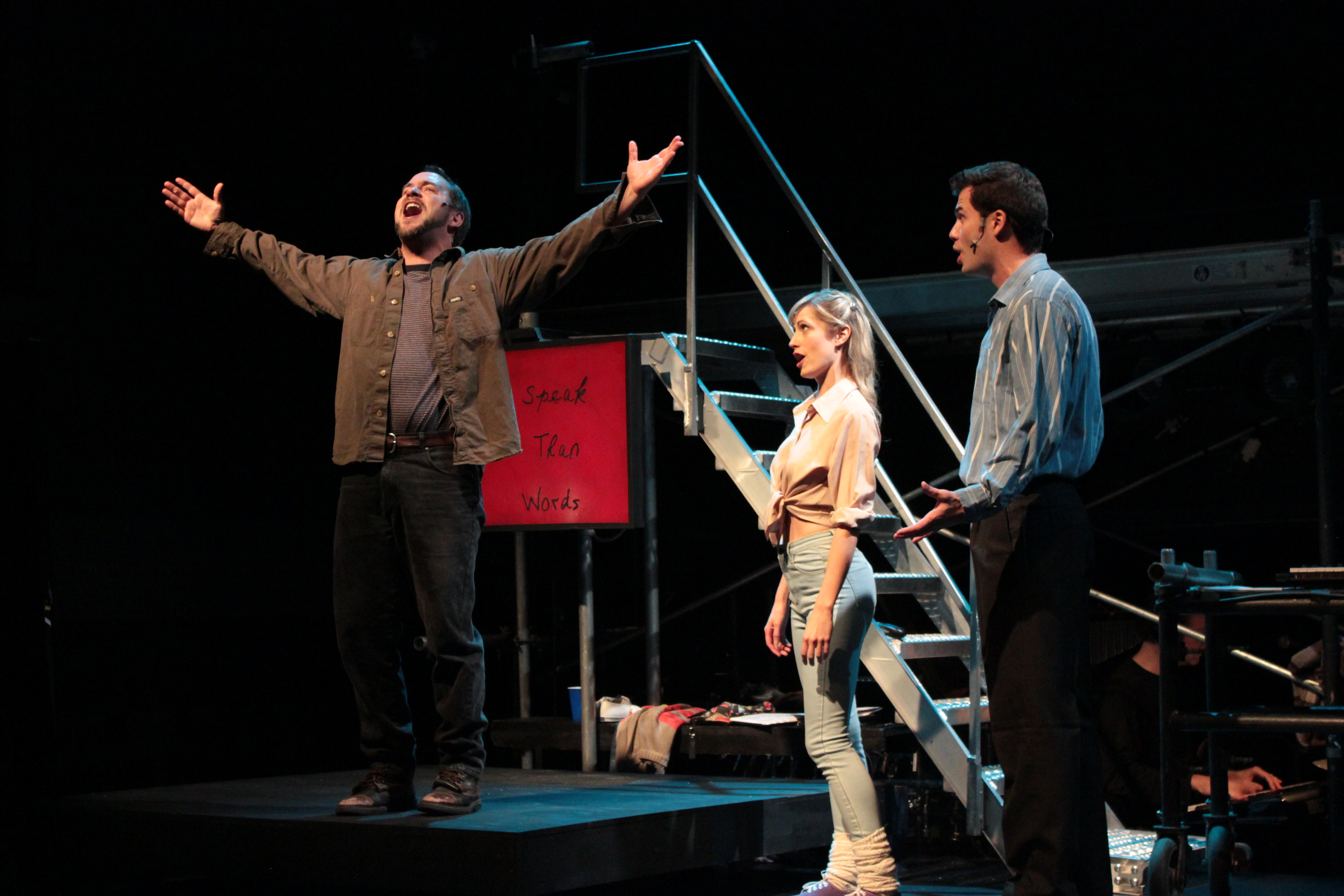 The other production was Angelwalk Theatre’s excellent tick…tick…BOOM!  which is, I’m excited to report, still playing at the Toronto Centre for the Arts Studio Theatre (but only until Sunday, so get your tickets NOW). tick…tick…BOOM! is an imperfect musical one-act that serves mostly as an insightful footnote in the origin story of RENT. Written and performed in a rough, one-man iteration by Jonathan Larson before his most famous creation took off, tick…tick…BOOM! was adapted into a three-person show and staged for the fist time in 2001, five years after the premature death of its composer. In it, the astute RENT fan can see the seeds of Larson’s now-iconic narrative and musical style. A style that would redefine musical theatre for young people in the 90s the way Hair did for young people in the 60s. What’s ultimately most provocative about this rock-light piece is its eerie prescience. tick…tick…BOOM!‘s lead character is a struggling but promising composer in New York named Jon. Jon is fighting the sense of impending doom that’s coming with the combination of age and lack of success. He’s also writing what he dreams might be “the Hair of the 90s; the cultural lightening rod that will energize the 20-something generation”. Larson was writing about himself, but without the benefit of hindsight. He wouldn’t live to see himself change the landscape of an entire medium, he just dreamed that someday he might. And somehow, he got it right. Knowing the future in a way that the author did not (and the characters do not) gives the audience a sense of higher stakes. What if Jon gives up and takes a sellout marketing job like his best friend, former aspiring actor Michael? What if he decides to leave New York and go with his dancer girlfriend Susan to Cape Cod to raise a family? In tick…tick…BOOM! we see not only a behind-the-scenes, only slightly fictionalized origin story of one of the world’s most influential musicals, but the could-a-beens as well. We see just a few of the many ways RENT may not have come to be. If this wasn’t Jonathan Larson; if tick…tick…BOOM! stood on its own without the glimmer of RENT lighting the future of its protagonist, the Benny side of me would lament the rousingly cheesy ending. I would say that “follow your dreams” only takes you so far and a little rational selling out never hurt anyone. I would say that Jon is going to crash and burn and there should be at least  some note of melancholy in the finale that hints at that distinct possibility. But I would be wrong. Because tick…tick…BOOM! is about believing in your purpose and risking it all for your art; and even if most people never make it and it looks like Jon might not, the audience knows that Jonathan Larson did.

Notes on the Production:
– Parris Greaves is a captivating Jon with a rich, full voice, strong comedic and dramatic chops, and the ability to make Larson’s rock outbursts seem organic. He makes the character his own despite the author’s strong influence and commands the stage excellently.

– Ken Chamberland and Laura Mae Nason are likeable supporting players with strong voices. I thought she annoyed me at first but then I remembered that that’s just Susan, not Nason (she’s thoroughly charming and rocks those mom jeans like a pro).

– Is there something in the rights that prohibits cutting “Green Green Dress”? That song is The Worst and it comes so early that it makes the audience think the rest of the music will also be terrible with a side of icky (which it isn’t at all).

– Director Tim French does a great job of blending movement and character detail to balance the frenetic energy of Jon with the other calmer characters. He uses Alanna McConnell’s useful and thoughtful (lyrics as set decoration!) set well keeps the pace up and transitions smooth.

– Sound Operator Russell Hawley is a badass. Bad balance is the number one killer among small-scale musical theatre companies and rock musicals in tiny spaces are the trickiest. He pulls it off without a hitch, with a lot of help from Musical Director/Conductor Anthony Bastianon and his pitch-perfect pit band (which includes the great Shafton Thomas on bass).