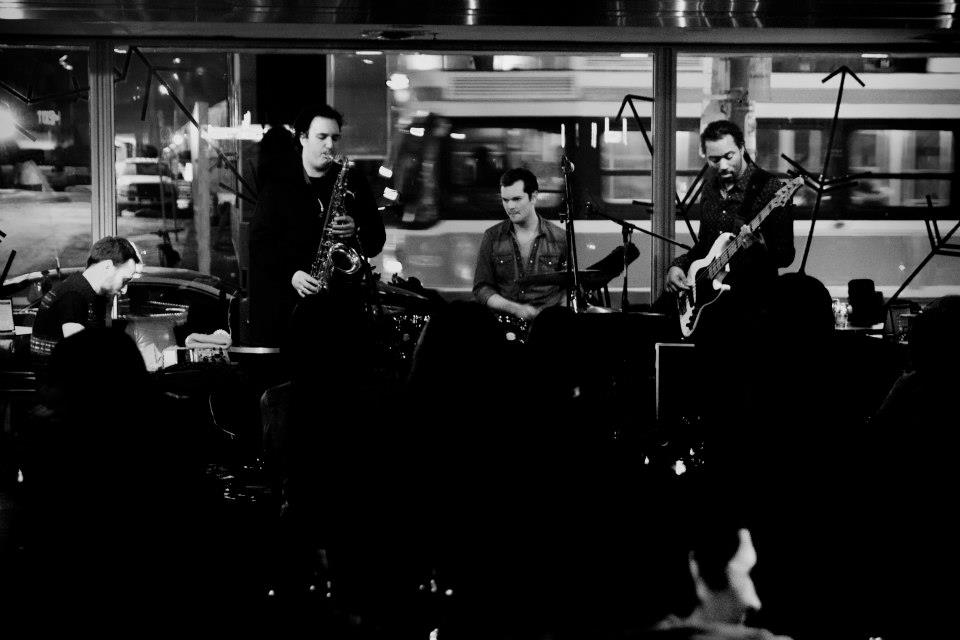 One of the predominant challenges faced by modern jazz musicians is that of an alienated audience. How does one push boundaries in a genre famed for its esoteric complexity—a genre where pushing boundaries is not merely expected but demanded—while managing to hold the attention of an increasingly fickle public? On Sunday night, in the Drake Underground, Shafton Thomas Group had some answers for us.

Sparsely populated to say the least (due to the last-minute booking and the Sunday-night set time), the Underground is chilly and a few couples are squirreled away in corners, hunkering down in their coats on leather-and-vinyl sofas.  The eponymous Shafton Thomas, bandleader and bassist, greets us with a warm familiarity and the wincing admission that our presence is above and beyond the call of duty.

He needn’t be so modest.

As the set begins, keyboardist Paul Morrison bends over the Roland like a spinster at the loom, aviary as he pecks and plucks at the instrument. He draws out an oscillating current of chords, bolstered by a synthetic arpeggiator; these roll and cascade like the opening strains of ‘Clair de Lune’ tempered in the fires of disco. Percussionist Mackenzie Longpre is using his simple kit with lyric virtuosity, softly probing cymbal and tom with timpani mallets like a gathering storm.

And gather it does, as bass and tenor saxophone join the mix. Thomas is a gifted songwriter and the set is a mix of oddball, industrial basslines (that sound ripped from the car chase of the first Terminator film) and disarmingly saccharine chord structures. The effect is that, while the underlying motifs may be abrasive and dissonant, they are quickly internalized as part of a larger texture, one that is playful and straightforward. Lyric and emotive. Not alienating.

It feels at times as though the real art here is the concealment of the craft’s complexity. More than once I was nodding along to a quiet fugue that wouldn’t have been out of place in a Rachmaninoff concerto, before checking myself and realizing the sheer dexterity flying from Morrison. “Paul is the X-factor,” says Thomas on a break. “We never know what he’s going to do. He’s a mirror, reflecting back any idea he can pull from the mix. I’ll hear something and be like, ‘Man, that’s cool!’ and he’ll say, ‘But you just played that!’” Thomas shakes his head ruefully, grins. All told, focusing on any individual onstage is like looking through a microscope—to the naked eye, everything is as it seems. But at the cellular level there is a fierce and unrelenting motion of elemental life.

Longpre, in particular, is a joy to watch. He thoughtfully changes between sticks, and each movement is calculated and deliberate. He presses on the skins to subtly manipulate pitch and tone. His wrists and fingers move like those of a painter, or a surgeon, and one can well imagine ink flying from his wire brushes. He occasionally throws a stick up, aiming for a shot, before visibly checking himself and thinking better of it. This restraint is admirable and belays the instinctive craftsmanship that the members of this quartet share. Later, Longpre clenches a drumstick between his teeth, keeping the beat with pedals while hoisting his snare from its stand for repairs mid-tune.

Thomas himself is magnetic but reserved, and never dominates the group that bears his namesake. But for his convivial manner before the show, a transformation is worked upon him as the show continues—his shoulders seem to broaden with the might of the sinewy basslines he throws down, and his feet plant more firmly on the stage as though he might be slowly melting the floor beneath him with superheated sneakers. Saxophonist Kristjan Bergey fills in the blanks left by the other three with endearingly resolving lines that speak at times of the best of 80s pop.

You know a band is onto something when the staff comes out from behind a bar to get a closer look. They are joined by a grizzled boomer in a rumpled Leafs jersey who loudly tries to count the guys in as they riff the intro to a new tune; he quickly leaves, frustrated, as the band refuses to conform to the rhythms of Bachman Turner Overdrive. They do end the show, however, with a straight four-to-the-floor, finishing with a flourish, and Longpre—who has been battling a cold—blows his nose into the silence.

These players know their craft inside and out, and the biggest complaint I could make would be that—at times—they seem to be lost in the cerebral nature of the performance and the sound doesn’t coalesce as much as it ought to. But when they are meeting each others’ gazes and bobbing in time, they are unstoppable. Jazz liberated from the intelligentsia, or something else entirely, call it what you will. But I’ll bite, these guys know their shit.

Shafton Thomas Group plays Dominion on Queen this Thursday. Check out the event posting and their bandcamp for more information.