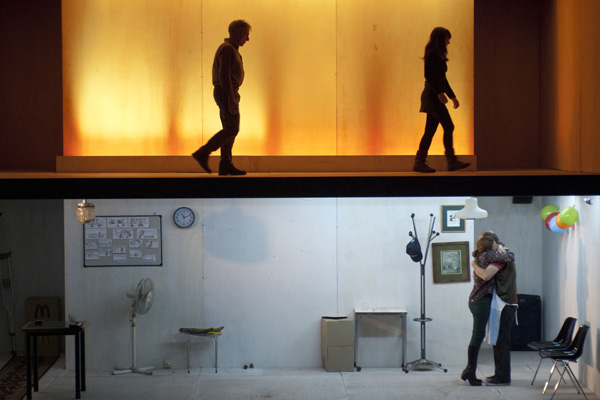 Cineastas
I wasn’t sure what to expect going into this Spanish-language exploration of the lives of filmmakers but what I found was a profoundly moving and wonderfully inventive piece of ensemble theatre. The cast was extraordinary in their versatility and emotional depth (Javier Lorenzo in particular pulled at my heartstrings in multiple roles) while the construction of the piece itself is fantastically clever and thematically intriguing. Juxtaposing four filmmakers’ lives with their work- both sides of fact and fiction informing each other as they play out simultaneously on a two storey set- the piece tackles the fascinating subject of the creator’s relationship to their art without the pretentious philosophizing that often accompanies the subject. Funny, moving, powerful and expertly executed, Cineastas was a treat of both theatrical and cinematic proportions and definitely the artistic highlight of Luminato for me.

Card Table Artifice
Magic is not my strong suit and neither of the two shows that made up this odd evening really connected with me. I’ll thus leave the analysis to our resident magic expert David (coming soon).

If I Loved You: Gentlemen Prefer Broadway
The concept of If I Loved You is very simple- Rufus Wainwright invites his famous male friends to sing Broadway love songs with him. There’s a great orchestra directed by the lovely and talented Stephen Oremus and Rufus wears some truly fabulous outfits but that’s literally all there is to it- star power, musical theatre, and a little bit of status quo subversion. Obviously that’s not something I was interested in missing. Apparently neither was anyone else since the massive Sony Centre was packed on Saturday night to see the thrown-together spectacular.

The whole thing is woefully under-rehearsed and some of the acts are badly cast (there’s also something very strange happening with the lights). Steven Page is the only one who really sings right to Rufus as though he understood the concept of the event (Ezra Koenig won’t even look him in the eye), Josh Groban is the only one to figure out that Rufus is a two-cheek kisser (Quebec upbringing, people, come on) and Brent Carver joins those two as the only people who manage to make it through all their songs as though they bothered to prepare at all (it’s teleprompter-a-palooza otherwise with plenty of missed lyrics even with the screen). But despite the thrown-together feel, If I Loved You has enough moments of utter specialness that it’s still the crowning event of the festival.

Let’s start with Rufus because you have to start with Rufus. Occupying that special Rufus-only zone of hunky-meets-glittery, Wainwright is most definitely the star of his own show, no matter whom he surrounds himself with. His voice is imperfectly beautiful in every arrangement he performs (his solo on the great “I’ve Grown Accustomed to her Face” was my favourite) and he peppers in just the right amount of personality to keep things light without detracting from the songs themselves. David Byrne is adorably dreadful, hitting only some of his notes while missing a lot of lyrics and almost all of his cues but always with a gung-ho grin that made me instantly forgive him. Boy George’s voice sounds atmospherically smoky-cool in some places but he just gets in the way during duets like the wonderful Cole Porter ditty “You’re the Top” (try not smiling when listening to that song). I’m really not into countertenors so Brennan Hall’s appeal was a little lost on me (he seemed to get into it at least but he also messed up the words to “All I Ask Of You” which is Not Acceptable). Vampire Weekend frontman Ezra Koenig is completely out of place and doesn’t seem to be having much fun but, whatever fun he’s not having, Steven Page is having it and more as he hams it up and delivers some of the night’s most surprisingly great vocals.

The actual best vocals, obviously, belong to Brent Carver (that man is made of magic– Andrew Rannells, who?) and Josh Groban. They’re both delightfully charming and sing the most challenging songs (you don’t give Sondheim to Boy George) and they sing them beautifully (they even appear to have practiced!), usually while actually facing their duet partner. But you’ve heard me gush about Brent Carver before, now is the time when I talk about the fact that I went to this concert entirely to see Josh Groban (sorry, Rufus). I love me some Josh Groban. So much so that I spent much of Saturday spontaneously shouting “Groban!” to no one in particular (only when alone in my house, I promise). His voice is crazy beautiful but his music is repetitive and features too many gospel choirs for my taste so I’ve never been a die-hard Groban fan for the reasons you’re supposed to be a die-hard Groban fan. Rather, I fell in love with Josh Groban when I read an interview in which he confessed that he often trades afterparties for the chance to go back to his hotel room and finally beat Guitar Hero. Groban is my single favourite tweeter- full of funny observations and cute pictures of his dog-  and one of the best TV guest stars around (his arc on The Crazy Ones was so much fun). He’s just a likeable dude, a rare celebrity who makes you feel like you know him (you know how everyone thinks Mindy Kaling is their best friend? It’s sort of like that). And that voice doesn’t hurt (nor do the boyish looks or immense onstage charm). Every time Josh Groban opened his mouth on Saturday (highlight: “Someone Else’s Story”), Rufus Wainwright would singsong the word “Dreamboat!” Yes, Rufus, as usual you are right, but I’m disproportionately proud of myself for loving Groban on the merits of his sense of humour and good nature rather than strictly for his swoony voice and sparkly smile. Good dude, that Groban, the sort of dude you want to spend your Saturday night with, even if he’s singing love songs to a hunky dude in leather pants (especially when he’s singing love songs to a hunky dude in leather pants). 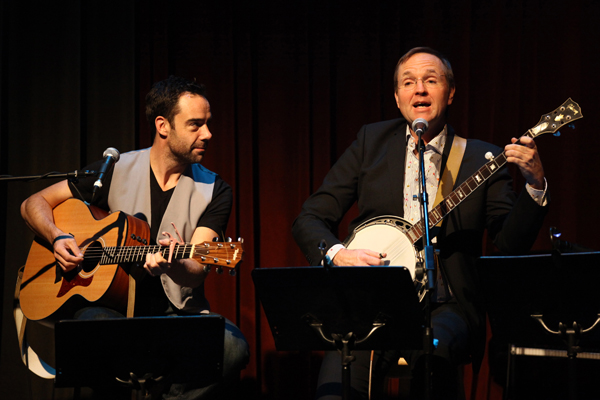 The Lost Songs of Toronto
I was psyched to see this cabaret that I missed at the Young Centre. Dennis Lee’s work set to Mike Ross’ music formed a winning combination for Alligator Pie so I was sure it would work again. But the magic just isn’t as prominent here. Ross is always a treat, I usually love a little world music from Waleed Abdulhamid, John Millard on the banjo and Patricia O’Callaghan’s beautiful voice (not a fan of Suba for undefinable reasons) but I think the Soulpepper Resident Artists are probably at their best when they divide and conquer established songbooks for the Global Cabaret Festival rather than writing their own and performing together (by combining all 5 musicians with Lee, the performing power of each one is severely diluted, which is my way of saying that there wasn’t enough Mike Ross). There are a few lovely songs here (“The Angels of Kensington” was probably my favourite) but it’s overall a little underwhelming. And there’s a big pillar that blocks a huge portion of the stage at the Edward Day Gallery, which is just dumb.