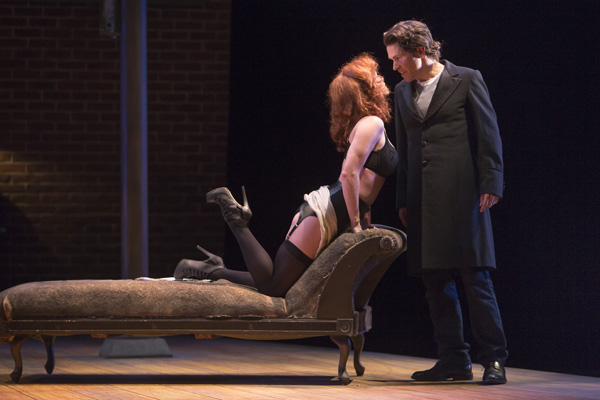 On Stage in Toronto: CanStage This Fall

Both of CanStage’s current productions are contemporary one-act contemplations of  female power as attained through sexuality (to put it as simplistically as I possibly could). In The Flood Thereafter, the mythological sirens are represented in the figure of Courtney Ch’ng Lancaster as a brash and modern young woman paid to unceremoniously remove her clothes once a night in a bar in rural Quebec. It’s a great part for Lancaster, a stunning young actress out of the Soulpepper Academy who has quickly become one of my favourites. She’s cut her teeth so far playing sweet (if outspoken) young girly girls, so June’s rough edges and daring nudity are strong choices that show Lancaster’s guts, range and considerable talent. She holds the stage beautifully, selling the one truly tricky point of the text’s setup- June has to, without trying in the least, hold a massive power over the other characters. Especially the men. Those men are, interestingly, far less interesting than every single woman they share the stage with. Patricia Marceau is enigmatic and strong as June’s mother Grace and Maggie Huculak delivers some of the production’s best moments as the modern Penelope to W. Joseph Matheson’s Homere (aka Odysseus… well, all the men are Odysseus in some way or another). The lights and set are excellent and the Berkeley Street space is one of the city’s most dynamic with its high ceiling and exposed brick, but the fascination of Flood Thereafter pretty much begins and ends with Courtney Ch’ng Lancaster. The modern twist on greek mythology is a great idea for a play and the modern Quebec setting is intriguing, but Sarah Berthiaume’s text just doesn’t hold any of the intellectual heft of its counter-programming.

Venus in Fur is the real selling point for CanStage this fall. It may be the real selling point for CanStage this year. David Ives’ inventive, layered, Tony-nominated text is the perfect vehicle for standout contemporary theatre. A real-time (or close to it), single-room setup (with an excellent forced perspective set by Debra Hanson) allows Carly Street and Rick Miller the opportunity to truly carry the piece on their backs. And they carry it well. Street is a fireball of a performer who completely owns the superb role of Vanda. Miller, for his part, proves here that he’s so much better than his Rick Miller shtick. He gets a little broad near the end when Ives starts really stretching his examination of gender roles but he otherwise delivers a nuanced and intelligent performance as playwright/director Thomas. There are moments when the play sags under the weight of its own contemplation, and others when it spends too much time in the text-within-the-text, but at only 90 minutes, Venus in Fur packs an astounding amount of mind-bending, form-busting guts into a small package. It’s intellectually thrilling, emotionally verbose, and fantastically performed- the best I’ve ever seen at the Bluma Appel.