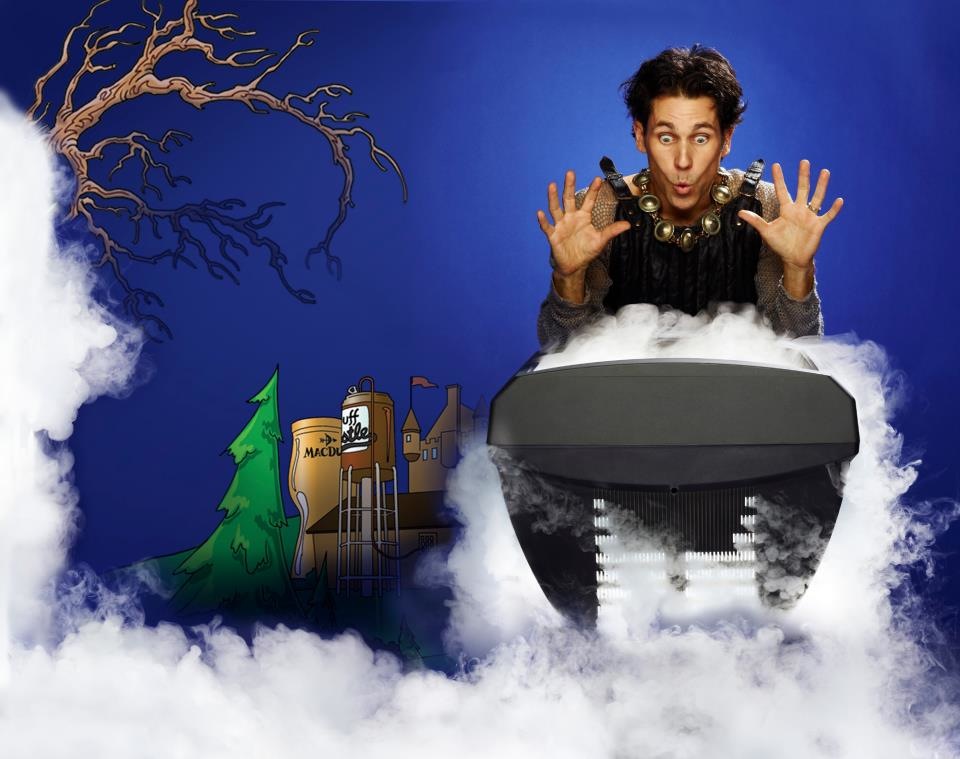 Rick Miller’s wackado Macbeth retelling, currently masquerading as a fourth Shakespeare production at the Stratford Festival,  uses a comprehensive cast of voices from one of TV’s most successful crazy experiments, The Simpsons. When this silly one act was appearing at fringe and comedy festivals, or when it played at The Factory Theatre last September, it was a fun thing to have in existence since I honestly believe that the crazy liberties bored artists take with centuries old works are what keep them alive (the works, not the artists- though maybe them too). But it’s a ridiculous reality that the show is currently play The Stratford Shakespeare Festival (where highschools across the province are planning field trips). I think MacHomer, with its one-man delivery and severely cut text, is too confusing to really turn Simpson fans onto Shakespeare and it certainly won’t be turning any Shakespeare fans on to The Simpsons anytime soon (with low-brow-humour Homer as the uncompromising lead and wittier characters like Lisa marginalized, the interpretation is really not The Simpsons at its best). If you are that unlikely person who loves The Simpsons AND knows your Mackers inside and out, you will love MacHomer. If you are anyone else (and not just mesmerized by Miller’s fair voice work and insane idea), you will find MacHomer a) boring or b) confusing, possibly both (either way- not prime field trip material, at least not if you’re sincerely trying to teach Shakespeare to 15 year olds).

The Simpsons is, in its own right, a remarkable piece of the pop culture canon. The generations of writing staffs its gone through, though varying in genius, have all sported a creativity and insight that is almost unparalleled on TV. I’ve never loved the show, but I appreciate its ability to get to the heart of things, no matter the subject. Had Rick Miller utilized creator Matt Groening’s massive universe of characters more thoughtfully, he could have contributed to the great mass of Shakespeare interpretation that somehow has informed the work it interprets. Why, aside from the actor’s ability to mimic Homer’s voice most closely, would the Simpson patriarch play the title role when the characters are planted into the action of Macbeth (as a sort of self-aware play-within-a-play)? One of Homer’s most inescapable defining qualities is his utter lack of ambition, and since that’s not played for ironic laughs nor is Marge’s Lady M strong enough to motivate all on her own, his casting made me seriously consider whether Miller had actually read Macbeth when he started planning this misadventure. Mr. Burns plays Duncan for no discernible reason apart from his position of authority (there’s no way someone would lose their head for murdering Burns- there’d be a town parade!) and poor Bart, the scampy fan-favourite of The Simpsons, is mined for none of the underlying darkness that the long-running series likes to play with; instead he attempts, then abandons, the itty bitty role of Banquo’s son Fleance. Barney Gumble, the town drunk, plays MacDuff in what could be the worst casting move since… nope, can’t come up with a “since”, literally since Ever. I think thoughtful and loyal Lisa should play MacDuff (or, perhaps the uber moral Ned Flanders), but the more of MacHomer I watched, the more I suspected that the casting, rather than a commentary on both fictional worlds, was simply a reflection of which voices Miller had best perfected (his Homer is solid, his Marge uncanny, his Lisa…. less awesome).

The whole thing plays out with remarkable energy against a backdrop of Springfield/Scotland mashup images that are a life-saver when it comes to differentiating voices and clarifying plot. The play’s best moment is the puppet musical number that summarizes Act One (before a 30 second “intermission” in which Miller drinks a Duff beer before continuing on). Using the tunes of iconic musicals- “One Day More” being the best- the characters speed through the first two acts of Macbeth with accuracy and wit that is far superior to the joke-laden rest of the show (since the puppets are there to indicate who’s talking, the whole thing makes much more sense). The weakest moment is the awkward curtain call performance of “Bohemian Rhapsody” that literally has nothing to do with anything except indulging Miller’s need for validation in his mimicry.

But overall, MacHomer isn’t horrendous. At worst it’s not particularly interesting and doesn’t add anything to either Shakespeare’s text or Groening’s world. It’s being targeted mostly at students, but I think those students, having suffered through months of English teachers explaining basic blood metaphors to them in preparing for the field trip, deserve a proper production. Why Stratford is working under the assumption that teenagers would rather watch a middle-aged guy bop around doing familiar voices over a bloody psychological thriller like the one that graced the 2009 festival stage is beyond me. It feels like departing Artistic Director Des McAnuff just didn’t want to bother doing the required minimum number of Shakespeare productions the festival is expected to produce per year. Yes, yes, “he loves Shakespeare”, I’m not saying he doesn’t, but it’s an undisputed fact that he loves musicals more, and it only takes one look at this year’s festival lineup to hear that loud and clear. Stratford is a Shakespeare Festival- it says so in the name- and 3 out of 14 is not enough Shakespeare. I love musicals too, but a great Stratford musical still isn’t as good as a great Broadway one (just ask the JCS cast, struggling over on the Great White Way). A Stratford Shakespeare production, on the other hand, is virtually unrivaled in quality. Anywhere. So let’s do them again, shall we? Because really, Des, literally no one is buying MacHomer as a suitable substitute for the real thing.