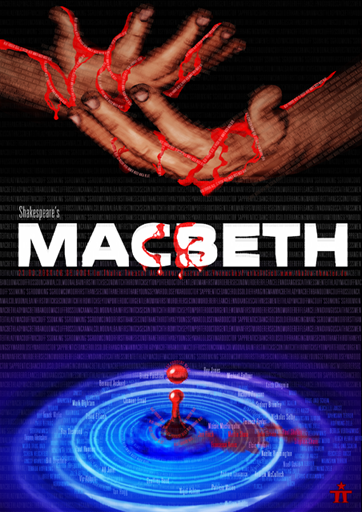 “Portrait of a Psychopath”

I have this friend who has played many of Shakespeare’s greatest roles, heroes and villains alike. He’s tackled Aaron the moor and Richard III, Oberon, Lear and Hamlet among others. But just the other night he said something that struck me as strange, “I’ve never had any desire to play Mackers”. Now, there are jokes to be made here, theme songs to be sung: “call me superstitious or cowardly or meek, but I’ll never play a character who’s name one dare not speak… I’d be crackers to take on Mackers, you see I’m skittish about the Scottish Tragedy” and Slings and Arrows episodes to be quoted . But it’s the very same darkness that Slings and Arrows attributes to Macbeth that intimidated him.

Our beloved television show spends much of season 2 wallowing in the play’s darkness. They call it “a portrait of a psychopath”, say it’s “extraordinarily difficult to stage effectively” and revel in it’s infamous curse. They call the character a tyrant, label the play as overly bloody and present the idea that it teaches the audience nothing. When Geoffrey suggests a bit of stage business that would create pathos for the character, identify him as human and vulnerable, he is given seemingly endless grief for it.

But I think Geoffrey’s right. I think Macbeth is human and vulnerable. If not deserving of pathos then at least recognizable in his vulnerability to darkness. I think the most powerful Macbeths are good guys, ambitious and flawed but good nonetheless. The play is all the more scary for every bit of themselves an audience member can find in Mackers.

As for the suggestion that Macbeth is a uniquely bloody play, it’s really not that accurate. Sure, blood is a recurring allusion, a metaphor for so much that comes back in the text scene after scene. But in terms of body count Macbeth isn’t that bloody, or disturbing in terms of what gets done. Let’s start with regicide, the atrocious murder at the center of the play: it happens offstage, and there are shockingly few Shakespeare plays in which the king isn’t killed. Then there’s a pretty standard murder: Banquo, followed by two more shocking ones in the innocent Lady Macduff and her son. Then there’s a little off-stage suicide (Lady M), a battle death (Young Siward) and the final triumphant beheading (Macbeth himself). Though atrocious and incredibly meaningful in terms of character development and personal/political ramifications, these deaths lack an element of the grotesque that permeates so much of Shakespeare’s work. If Macbeth is “a portrait of a psychopath”, how come the raping and maming happens in Titus Andronicus? Richard III threatens one child and kills two more for power. Othello smothers his innocent wife out of blind rage. Lear has eye-gouging! Macbeth is a dark play, full or murder and death, but it’s certainly not uniquely so.

Finally, by definition, psychopaths are lacking in remorse and guilt. Macbeth is almost entirely based on remorse and guilt. Even before he panics and gets even more blood on his hands, Macbeth is haunted by the murder he commits. It tears at him, drives him to the brink of sanity and is his eventual downfall. You want to talk psychopath, let’s talk Othello‘s Iago, about whom another friend and I had a long conversation the other day in which we realized that much like the Joker (from Batman), Iago just wants to watch the world burn. He gives ever-changing explanations for his behaviour, unable to land on a single honest and sympathetic motivation for the havoc he wreaks. Or what about Titus Andronicus‘ Aaron, who repeats over and over that his only regret is not having committed a thousand more crimes. Or King Lear‘s Edmund, Reagan or Goneril who’s crimes are perpetrated against their own fathers, the people who are supposed to love them the most. Of all Shakespeare’s villains, I would argue that Macbeth is disturbingly human and scarily relatable instead of psychopathic.

Instead of criticizing it for its darkness, Macbeth should be praised for its affecting intensity. It’s terrifying, challenging and emotionally draining. Instead of listening to Oliver and Nahum’s assertion that the play is “a portrait of a psychopath”, if we’re looking to Slings for the key to what Macbeth is all about, I think we should listen to Geoffrey. He said that Macbeth is a man and about the play itself and the process of tackling it, he said “There will be struggle. There will be sacrifice. There will be tears, there will be the occasional fistfight. And in the end, there will be transformation” and that, to me, seems like something worth braving the curse for.