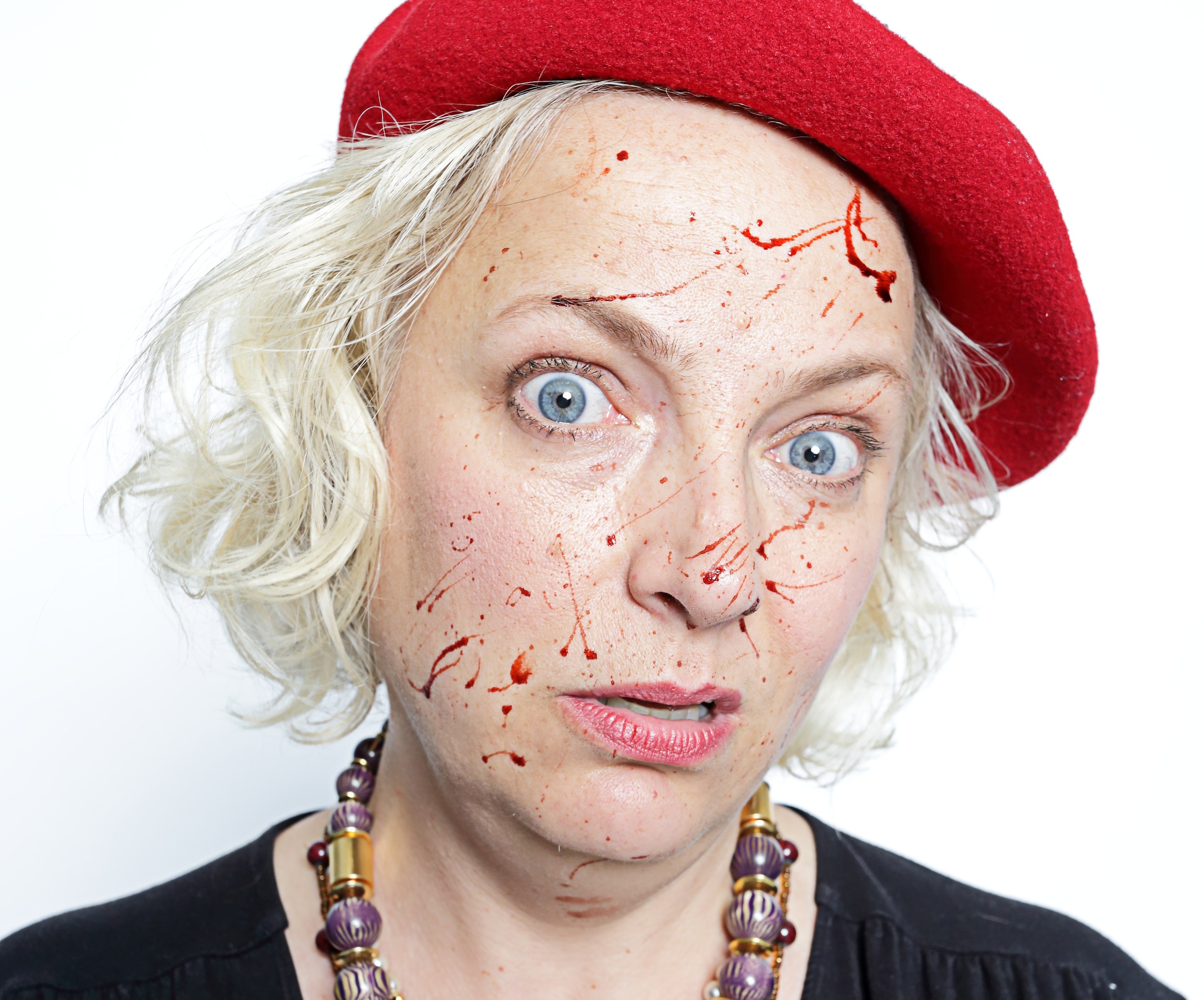 Astrid van Wieren was everywhere in 2013 (and 2014, we saw her at Theatre Passe Muraille just last week!) and she’s always one of the best things about the productions she’s in. One such standout performance came in Kat Sandler’s fantastic Halloween dramedy Sucker. As the compassionate, kind and a little bit kooky tenant Constance, Astrid created some of our favourite moments in one of our favourite productions of the year.

In the middle of her run of The Way Back to Thursday at Theatre Passe Muraille, Astrid took the time to answer our questions about Constance, Kat, and tent sex with Andy Trithardt.

Do you remember the first play you ever saw?
I believe the first play I saw was Peter and the Wolf, but the first play to stick with me and blow me away was Amadeus by Peter Shaffer which I saw at age 14 in New York City. Frank Langella played Salieri. Hypnotic. I’ve done two productions of Amadeus and it was a thrill to be ‘inside’ it.

Where did you develop as an actor?
I studied at Ryerson Theatre School and had some excellent teachers, but even better, wonderful ambitious, talented classmates. When I first left school I always said ‘yes’ to any project (unless it offended my personal politic) and so I did a lot of new plays, early fringe and wonderful edgy stuff like a huge production of Marat/Sade in an old factory with three directors. I switched back and forth from musical theatre to straight plays to hybrids of the two – and it was a wonderful time. Nobody put me in a box or labelled me as this or that kind of performer – there was no brand to protect and lots of room to fail and experiment. Nothing’s really changed, I still try to challenge myself with diverse characters and projects. And I’ve been beyond fortunate. Just last year I was able to do some fun, musical dinner theatre out west; a wonderful, bizarre Austrian play with some amazing women at Summerworks; Kat’s incredible play and at year’s end started rehearsals for a modern song cycle.

What’s your favourite role you’ve ever played or production you’ve ever been in?
Wow, it’s almost impossible to narrow it down to one…so I’m going to list two. They were both directed by Jon Michaelson – who is awesome! The first was the role of Baal in Baal – a rock and roll play. It was a reworking, re-imagining of Brecht’s play by Rose Cullis. We did it at Buddies in Bad Times. Brilliant cast and all original music (by myself and David Young) and lyrics (me). And the second, that would be Lorraine in This Wide Night by Chloe Moss which we mounted twice with the wonderful Claire Burns. Even though there was so much sadness in the part, I miss playing her – she was funny, vulnerable, raw. So wonderful to inhabit.

Is there one you haven’t tackled yet that you want to try your hand at?
I’ll play ANY role Kat Sandler ever offers me.
Mother Courage.
Mama Rose.

Who are some of your favourite people to work with?
Well, for starters I love everyone at Theatre Brouhaha: Kat Sandler and the Amazing cast of Sucker. We really had a blast together. We did improv games before most of the shows to warm up. There was a lot of silliness and fun with that group! So afraid I’ll miss a whack of great folks if I start to list them all. I’ve worked with some awesome theatre artists the last twenty plus years who I also just really enjoy as people– okay I’ve typed out about seventy-five names and then thought about how fortunate I’ve been. But also that a long list of names would just get boring so I’m going to just list the first ten fave peeps that come to mind – Jon Michaelson, Cyrus Lane, Sharmila Dey, Zarrin Darnell-Martin, Claire Burns, Morris Panych, Neil Foster, Roseneath (that one’s a bit of a cheat encompassing many people at once), Lisa Horner, Denyse Karn. AND everyone I am working with right now on The Way Back to Thursday at Theatre Passe Muraille! There’s also the long list of people I’d LIKE to work with in the future: Brendan Healy, Matthew Jocelyn, Judith Thompson, Roberta Maxwell…that’s the longest list of all!

Tell us about Sucker. What was it like working on a world premiere?
Sucker is a phenomenally funny AND moving play by the prolific and super fun Kat Sandler. The play ruminates on the themes of grief and love. It was exciting to be in one of Kat’s pieces. But honestly, we were all so busy juggling schedules and squeezing in rehearsal time when and where we could, that it didn’t feel like a world premiere, just an awesome story that we had to get up on its feet quickly.

Was the text still developing through the rehearsal process?
Yes. Kat has a great ear for dialogue and an even better b.s. detector. If something wasn’t sitting quite right in the mouth of a character/actor, she’d change it. She’d fine-tune the rhythms and builds of the scenes, and it wasn’t always just to sharpen the humour. Kat also has a great sense of emotional rhythm and build. Her monologues are genius. And she knew some of the people she was writing for better than others. She really knows how to play to Andy Trithardt’s strengths (though does he have weaknesses? I didn’t see ’em) Kat is wonderful at taking mistakes or jokes on the fly and incorporating them into the script.

What are some of the perks and challenges to being directed by the playwright?
Well, when it’s Kat, it’s all perks. Seriously. She’s not precious about words or moments. Does it work? That’s her litmus test. And she works fast. You’re up on your feet. And moving. And she knows where it’s headed. She’s patient and definitely open to what every actor brings to the table, but as soon as that clay gets thrown on the wheel, she’s molding it! I know, I’m sounding like a kiss- ass, but understand, I had seen her plays: Delicacy, Rock, Help Yourself and We Are the Bomb and I think I practically begged to be in something. I certainly made myself available.

Your character Constance is a mystery for a large chunk of the play and is routinely called weird or an oddball. How much trial and error was involved in finding exactly the right amount of eccentricity?
The great thing about Constance is SHE never thinks of herself as eccentric. You go moment by moment as an actor and it adds up. She’s certainly called all those things. I feel Constance doesn’t have a lot of filters so she says what’s in her heart and she goes for what she wants. She’s emotional so that makes her a little outside the norm of our often repressed society. The costumes helped. She likes to dress up a bit – play the vamp, or the casual roommate, or the church going confessor…But all the characters in Sucker are pretty out there. Two of them want to be vampires!

She also turns out to be a bit of a cougar. What’s the secret to playing big comedy like sex in an indoor tent with an aspiring rabbi in a part that’s ultimately so tragic?
Mmmmmm. Interesting question. I never really thought of Constance as a cougar, I mean I get that the label fits, but feels too reductive. She’s wounded and vulnerable and wants love, and yes, the comfort afforded by physical intimacy. I feel that she became fascinated by the idea of Jamie through reading his postcards- a romantic escape. Constance is an imaginative person. And then when she meets him (and hey, it’s Andy Trithardt playing him so, you know…cute!) she’s attracted to him. Also, they’re both vibrating with a kind of grief that recognizes a fellow broken heart. A kind of mating call, if you will or emotive pheromone.Their coupling almost feels inevitable and yet a complete surprise, too. The secret is to play the truth of it. And don’t step on the audience’s laughter. Trust the text. And PLAY!

When you first read the script, did you think that Aenth was your character’s son? Did you hope that he was?
Very briefly, I thought maybe Aenth was Constance’s long lost son. And yes, I hoped he was, but it’s more satisfying that he’s not, really. And more realistic.

Did you have a favourite moment in the production?
Well, besides kissing Andy, I have four fave moments.
1) Watching the amazing comedic genius of Jess Moss throughout the play and rehearsal, but specifically when Aenth (Kyle Shields – also very funny) arrives for the first time and Beth just watches him explore the room. We (Colin Munch, Andy and I) would watch from the wings. Her face was all things Lucille Ball, Judy Holiday… — she was channeling the best in that moment. It’s hard to describe.
2) When Beth spat out ‘part of Carter’s neck’ and the faces on the audience that I could see as it smacked onto the floor.
3) The exchange with Jamie (Andy) after I tell him about my run away son and he offers comfort with the words, ‘ he might be dead’ and my reaction and the audience’s beautiful awkward laughter… such a real strange moment. Always played a little different every night by us both. Always right.
4) Carter (the hliarious genius Colin Munch) slamming the door behind him with his foot when his character finally arrives at Beth and Jamie’s place.

What’s coming up next for you/what are you working on now?
The Way Back to Thursday by Rob Kempson at Theatre Passe Muraille til February 8th

Finally, I’d like to say thanks so much for the nomination! We’ve got a vibrant theatre scene in Toronto! I see as much as I can – I encourage audiences to check out not only the main stages in Toronto, but be adventurous and take in some of the indie theatre scene. There’s a lot of passionate, incredible story telling happening. Enjoy!