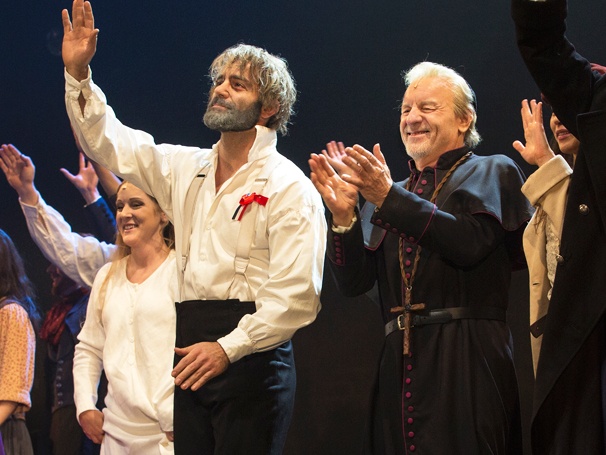 On Stage in TO: Musicals Everywhere (Part I)

Toronto is having a bit of a musical theatre moment right now. This town usually isn’t that flush with song and dance- one or two shows playing in the commercial theatres plus whatever the LOT’s doing and that’s it on any given day. But right now Mirvish is in the final weeks of their best musical production in years, Hart House is kicking off their 2013/14 season with a musical joyride, Acting Up Stage is coming up on their big show of the year, Passe Muraille just opened an original musical one-act, and even CanStage is premiering a musical this week (when was the last time CanStage did a musical?). That’s too many shows for one article, so here’s Part I of our roundup of Toronto’s Musical Theatre Moment.

The Wedding Singer (Hart House Theatre)
Over the course of the last year or so, Hart House has really stepped up its game with thoughtful, entertaining, and interesting work. What’s perhaps most interesting about the company is how broad a range of material they tackle. In the last 12 months, they’ve successfully executed a holocaust drama, a Shakespearean comedy, a bleak Canadian one-act and now a flamboyantly sweet musical adaptation of an Adam Sandler rom-com (sounds ridiculous, I know). The Wedding Singer should be a terrible musical and the fact that it’s so well adapted is a huge credit to the writers (some of the songs are really very catchy), but the task of maximizing its fun and minimizing its superficiality still falls to director Luke Brown at Hart House. And he does exactly that. Perhaps it’s luck that the show’s most memorable number is also its opener but from the moment the impossibly charming Isaac Bell kicked off “It’s Your Wedding Day”, I was hooked. Choreographer Amanda Nagy sends the exuberant ensemble into a set of joyfully simple dance moves and it’s all you can do not to get up and join them. The show has its flaws, from the occasional waste-of-time number (“Saturday Night in the City” is pretty atrocious) to the criminal sound problems that undermined the vibrant Romina Cortina’s big solo on opening night, but it swept me up in Bell and Ashley Gibson’s sugary romance and carried me back to a time when the thing I loved most in the world was a good musical comedy (here’s to you, Hairspray!). Hart House has done a lot of good work this year, but The Wedding Singer is the one that will make you happy, and that’s not nothing.

The Way Back to Thursday (Theatre Passe Muraille)
On the flip side of the coin, Rob Kempson’s new one-act song cycle is emotionally stirring but what fun the audience has is fleeting because tears abound as the curtain falls. The writer and the great Astrid van Wieren are both wonderful as a young man and his grandmother who grow apart over a series of 15 songs spanning about 20 years of their lives. Kempson’s melodies are at times derivative but they’re also incredibly beautiful (and some are wonderfully clever, like the one describing young Cameron’s horror at discovery his idol Rock Hudson was gay). It’s not an inventive tale, but it’s a relatable one and it will, inevitably, break your heart.

Les Miserables (Mirvish Productions)
I mean, it’s Les Mis. You can put any slate of musicals on stage in a single city and the rest will all be eclipsed if one of them is Les Miserables. It’s just So Good. Even this “re-imagining” that unnecessarily messes around with the iconic libretto, finds it necessary to visually explain Every Single dirty joke, and attempts to cleverly cover up what was clearly a budget-related cutting of the revolving stage- Les Mis is still Les Mis and if you give it to the right performers, it will be special. And these are the Right Performers. Melissa O’Neil is the perfect Eponine- tough and sad and heartbreakingly optimistic; her “On My Own” pulses with desperate energy (and glorious high belt notes) and her “Little Fall of Rain” is small and sweet in exactly the right way but it’s her detailed performance in small moments like her one-liners to Marius that make her ‘Ponine great. Mark Uhre brings his stellar voice and straight-backed gravitas as an incredibly strong Enjolras and John Rapson does some really interesting things with the great but small role of Grantaire (especially in his stirring verse of “Drink With Me”). My intention was to not bring up Russell Crowe but it was honestly really emotional experiencing Andrew Love’s rich, heartfelt performance as Javert, having not seen the stage show since the film was released. Love pairs a Gorgeous, classically-tinged voice with a depth of emotion that elevates rather than squanders the amazing potential in one of the text’s most thrilling characters. Genevieve LeClerc’s accent sneaks into her wavery Fantine, Lisa Horner is obnoxious without being funny as Mme. Thenardier, and Perry Sherman’s Marius doesn’t have the conflict or charm of the best Mariuses, but those are my only complaints in the cast.

I had the distinct honour of seeing Les Mis at the special charity performance in which the legendary Colm Wilkinson played the Bishop for one night only. Much has been made of the moment when he joined current Valjean Ramin Karimloo at curtain call for a reprise of “Bring Him Home” and, yes, it was stunning, but what I want to talk about is how notable that moment was for Toronto. Ramin Karimloo appears to be the greatest Valjean since Wilkinson himself. He’s warm and soulful, wounded and natural with a voice that needs to be heard live to really be believed. The blasphemous side of me is tempted to say that he’s Wilkinson’s equal (or perhaps his better? That’s right, I said it; I’ll take your hatemail). When he hits Broadway with the performance later this spring, I expect general opinion to become that these two together stand well above the rest in Les Mis history. What’s just so damn cool, then, is the fact that was driven home (at least to me) as they stood side by side on the Princess of Wales stage- they both belong here. Karimloo, a Toronto native coming home after making a name in the West End, and Wilkinson, a long-time resident who put down roots here during a long stint as the Phantom of the Opera and never left.

This town usually isn’t that flush with song and dance, but on January 11th two of the world’s greatest musical theatre artists stood in their hometown and made a musical theatre moment that just didn’t belong anywhere else.