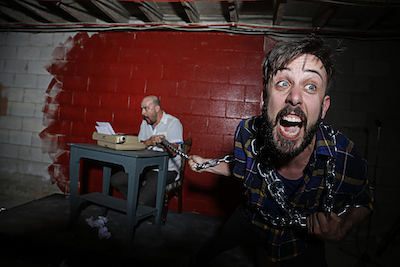 No Chance in Hell (A)
Did I see all the Fringe musicals this year? I at the very least came very close to seeing all the Fringe musicals this year and, at least of the ones I saw (which I think was all of them), No Chance in Hell is far and away the best. By a mile. Like, the only place where a great cast of actual triple threats meets a clever story and good characters and actual original compositions. It’s Day 8 of my 2014 Fringe experience (Day 12 of the actual festival) so it’s about damn time a really great musical showed up. Is it possible that my only complaint about this show was that there wasn’t enough Joel Gomez? (Guys, Joel Gomez is the best. I’m just going to keep saying that over and over again). I could muster some complaints about the story’s draggy middle section or about an underwhelming supporting character or the fact that the hour running time is too short to really make use of all the other really good supporting characters, but I’d rather just complain about there not being enough Joel Gomez. Though it’s not as if the scenes not featuring Joel Gomez are occupied with substandard talent. His partner in pearly gate security is Jacob MacInnis whose comedy skills shine though his glorious lower vocal register is underused. Dana Jean Phoenix steals her fair share of scenes with strong physical comedy and an even stronger voice, shining particularly brightly next to Jake Foy’s awesomely untrustworthy sleezeball Lucius in the show’s only heavy dance number. Jody-Anne Whitfield has the hard task of balancing a Bedazzled-style siren role in early scenes with her character’s dreamy romantic side in the second half but she manages well and is particularly charming in that later incarnation, especially in the arms of the ever-dreamy Isaac Bell as John Smith, the man whose place in heaven or hell is in question. Whitfield and Bell have fantastic chemistry, which helps to sell the somewhat abrupt life-or-death romantic stakes, and any absurdity in the rest of the plot is easily laughed off by any one of the many self-aware and snarky supporting characters (again, most of them deserve proper subplots). This is probably the best contender for expansion of everything I saw at the Fringe. There’s plenty of room to grow the story, there’s Definitely room for a few more musical numbers, and the cast is full of rising stars- it seems destined for another, bigger run after Best of Fringe.

Punch Up (A+)
I don’t know what you want me to say. Have I not spilt enough adjectives on the subject of Kat Sandler’s impossibly consistent wit and insight? What about Colin Munch; are you somehow unsatisfied with my many previous odes to his perfect timing and comic instincts? Screw it, we all knew this show was going to be not only excellent but particularly loved by me. Throw in a hilariously earnest Tim Walker as the Most Pathetic Man on the Planet and beautifully sincere Caitlin Driscoll as The Saddest Girl in the World with Munch’s stellar Funniest Man Alive and you’ve got yet another absurdly wonderful feather in the already well-feathered Theatre Brouhaha cap.

Julius Caesar Project (A)
The modernization of Julius Caesar is fairly commonplace. Modern governments, Fortune 500 companies, PTAs, beauty pageants- this text works in any microcosm with a monolithic power structure (which is pretty much all of them, really). For a play with such a hyper-specific original context, it’s actually one of Shakespeare’s most universal, which is why it works so well in the women’s prison where it’s been set by Spur-of-the-Moment-Shakespeare-Collective for the Toronto Fringe. Clearly Orange is the New Black-inspired (is any show more zeitgeisty right now?), the highly stylized production brings some interesting new elements to the text (Jordi O’Dael’s sweet but savvy Portia gives new resonance to the line “Portia is Brutus’ harlot, not his wife”) but it mostly succeeds for the same reason most great Shakespeare succeeds- an awesome cast. Led by Eva Barrie’s powerful, deeply human Brutus and Erin Eldershaw as a fabulously tough and unusually dark smart-ass Mark Antony, the ensemble far exceeded my expectations. Director Taryn Jorgenson’s strongly modern sensibility infuses the production with urgency and more than a few moments of keenly artistic staging, but it’s her cast (particularly Barrie and Eldershaw) that really make JCP stand out.

Toronto, I Love You (B+)
At the My Theatre Awards back in April, Bad Dog Theatre Company received the 2013 Honorary Award (the first theatre company to do so) because they’re the best in the business when it comes to improv in Toronto. Using the vague prompt of “locations around Toronto” (only one audience suggestion made the cut alongside two performer suggestions), the Bad Dog Repertory Players created Sunday’s unique performance of Toronto, I Love You with three interconnecting long-form scenes set at an alley bar, a fancy Loblaws, and an odd sculpture garden behind an Italian restaurant. The best bits involved a very nosy pair of Italians and Colin Munch as an evil representative of the Liquor Control Board. Not every joke landed and at times you could tell that the improvisers weren’t quite on the same page about what was going on in the scene but that’s the risk of improv- for every moment of sparkling, spontaneous genius there’s a trail of failed attempts, but the versatility and bench depth of Bad Dog makes even the strangest bit a risk worth taking.

Hugh and I (B)
My final scheduled Fringe show ended at 8:30 but I’d gotten a late start when a travel-time snafu made me miss my first show of the day so I figured I’d actually use that at-the-door pass and spontaneously see one of the Patron’s Picks. I chose Hugh and I because it was one of the only shows that didn’t make it on my schedule that I’d been particularly curious to see. Hugh Hefner and his Playboy empire is an endless source of fascination (am I the only one who was sad to see NBC’s The Playboy Club canceled a few years back?) and this original musical boasted a strong female cast which I found promising (I love the detail that Hugh’s entire world is populated by women, even all the male characters are women). Daniel Abrahamson and Dan Cummings’ music is really pretty great (my favourites were “How to Dance” and “What a Guy”) and the ensemble is indeed stellar with their fierce attitudes and obnoxiously great legs. Jennifer Walls is particularly vibrant as Hugh’s best friend Jim and Gabi Epstein is warm and wonderful as Jim’s wife Janie. Abrahamson’s songs, however, would have been better served by a stronger leading man than himself (his vocals just don’t do his notes justice). Though it leaves some glitz and grit on the table, Hugh and I is one of only a pair of top-notch original musicals at this year’s Fringe Festival.