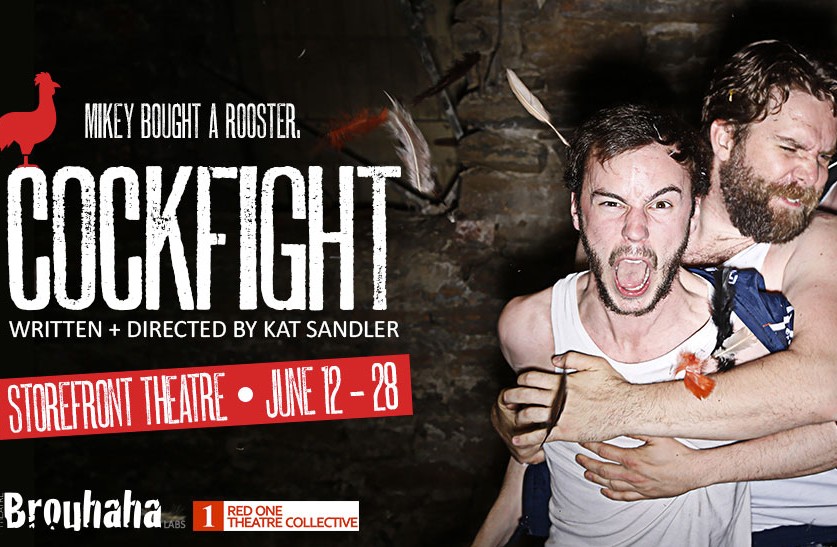 Please excuse the vulgarity of this review’s title; Kat Sandler‘s immersive dialogue has a tendency to catch on and affect my vocabulary for a few hours after I leave the theatre. The upsetting news is that, having just taken in her thrilling new work about three rough-edged foster brothers looking to break into the cockfighting business, I am now expressing myself like a Wolf of Wall Street character. The better news is that this temporary affliction is wildly worth it.

Arguably Toronto’s most prolific playwright and definitely one of its best, Sandler is such a wonderfully empathetic writer that every character she creates possesses the same sense of honesty no matter how removed they may be from her own personal experience. The testosterone and tragedy-fuelled trio at the centre of Cockfight are some of her most indelible creations yet in a piece that’s at once hilarious, unnerving and beautiful. The plot is fairly simple (and metaphorically rich, of course) but the emotional construction the plot rests on is intriguingly complex. These are deeply damaged people whose strained power dynamics and incompatible points of view lay barely buried beneath a dutiful bond of professed brotherhood. The troubling origin story that forged said bond is tactfully hinted at then unceremoniously unravelled amidst the mostly comic tale of three guys buying a rooster, deftly navigating the minefield of melodrama that comes with the inclusion of any sort of “shocking revelation”. On the surface, the action of Cockfight could probably be boiled down to sibling squabbles over money and girls (personified in the fabulous form of David Tompa as the threateningly ebullient cock seller known as Scarman Devilman and Caroline Toal as the sometimes insightful sometimes insufferable girl who moves the plot, aka “Ingrid”) but there’s such dense history of hurt and salvation between the self-titled Chiavetti Brothers that nothing could ever be that simple.

As wonderful as Sandler’s script is (and her direction is superb too, using designer Claire Hill’s excellent theatre-in-the-round set to great effect), it’s her extraordinary cast that really stands out here. Armed with Sandler’s nuanced and perfectly defined character voices, Benjamin Blais, Brenhan Mc Kibben and Jakob Ehman inhabit the Chiavetti Brothers with such synchronicity that to choose between them would be to diminish all three individual performances. It’s Ehman’s vulnerability as youngest brother Auggie that most beautifully reveals the big-hearted compassion in Mc Kibben’s Charlie, which in turn highlights the inflexible moral code that guides Blais’ captivating big brother Mike. I made the mistake early on of attempting to distinguish the star turn, only to change my mind about 30 times. In scene one it appears to be Blais, sensational as the fast-talking, wounded schemer whose pride, optimism and hero complex drive most of the action. Then attention shifts to Ehman in the text’s most dramatic role, vacillating powerfully between wide-eyed sweetness and deep-seated rage. The real surprise is Mc Kibben in the far more subtle role of middle brother Charlie. He begins and ends the play alone onstage but could still be easily eclipsed by his flashier brothers were he played by anyone less heart-wrenching than Mc Kibben. I can’t recall in recent memory a trio of leading performances so uniformly excellent yet drastically unique, an achievement clinched by how perfectly the three performances meld together to form the unshakeable bond at the play’s core.

There’s something really special about a production that leaves nothing on the table. From Sandler’s script to the set, the direction, the actors- nothing lets Cockfight down (well, Ingrid could be a little less grating, but that’s me searching for something to criticize). Even Jeff Hanson’s fight choreography is fucking incredible (you can’t say I didn’t warn you about the language), culminating in an all-out brawl the likes of which I’ve never seen onstage (the audience was split about 50/50 between laughter and horror, depending on the darkness of their soul). Go for the script, go for the actors, go to support the StoreFront Theatre post-flood, go for the laughs or the blood or the swearing or the fact that there’s a character named Scarman Devilman- just go, because (and I know I say this every time but that doesn’t make it less true) this is Kat Sandler’s best work yet.

You have until June 28th. Get your tickets HERE.