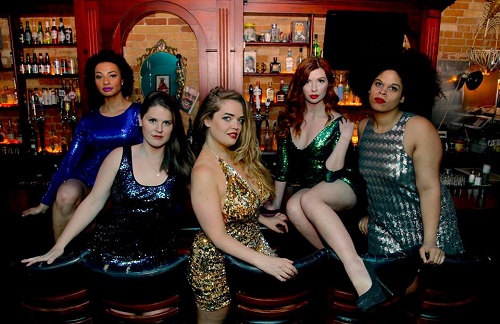 Lysistrata (A-)
I’m not much for crowds, so when Fringe starts I’m always a little anxious about all the bustle. But Lysistrata is exactly the right thing to seduce you into the spirit of the festival. The site – Painted Lady at Dundas and Ossington – is an perfect venue for how.dare.collective’s burlesque adaptation of Aristophanes’ comedy about women in ancient Greece boycotting sex to pressure the men into a peace treaty. The burlesque is not just an appropriate addition to the storytelling, it actually seems like this production should always be performed this way. (Not to mention the fact that the story is not a bad political idea at this moment in time, either). The production itself starts off a little awkwardly, but warms up quickly, as does the audience. The performances vary in strength: some are obviously better dancers than actors and vice versa, but the whole cast are so strong as an ensemble and are having so much fun that these discrepancies fade quickly into the background. I particularly recommend grabbing a spot near the bar from which you get an up close and personal experience – grab yourself a drink but keep it (carefully) in hand since the actors use the bar surface as a play and dance space.

It’s My Penis and I’ll Cry if I Want To (B-)
Jamie Black has written a play about gender: the traditional ways we define them, the extremes thereof, and the toxic manifestations that result. The play has a lot of potential but as it stands it’s a bit choppy: the introduction gives us a bit of history about Black, but I wanted to hear more about his own struggle with gender. Instead he quickly moves into talking about the extreme stereotypes he grew up with, and then finally transitions for the bulk of the show into a series of monologues depicting three relationships from both the man’s side as well as the woman’s. Something that would make this production instantly better would be to use actual props for what he mimes – a deck of cards, a photo album, a cigarette. Those items would help ground each character’s monologue, and give the audience something concrete to associate with each beat of the story. Each character is fairly well developed (the men better than the women) and the performances could be a bit more polished, but Black’s natural charm and talent shine through and he so easy connects with the audience that I found myself in tears by the end of the show.

Les Murs Ont Des Yeux (C+)
A.M. Matte’s play about the walls of a house personified as characters in a play is a neat idea, but the execution is ultimately a bit stilted. The story shows us the walls of a house performed by various actors. They banter at first but eventually the conversation leads to the question of what has happened to the woman who lives there – a mystery that needs to be solved. The costumes and set are designed neatly to display for us which character represents each room of the house: the television room, the dining room, the kitchen, the bathroom. The staging, on the other hand, works against the action, creating a static space in which all the actors stand in a line along the stage, giving it more a feeling of a staged reading. The play does sport surtitles, projected onto a screen, but some unfortunate lighting design decisions mean that they are projected onto a screen near the flickering light of the television (something that’s just mostly distracting throughout the production anyway). They are also small and somewhat blurry to read, so if you think you’ll need them sit close to the front.