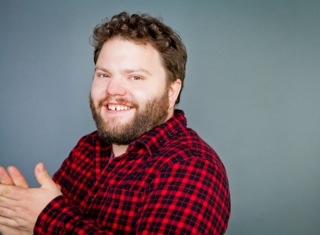 James Wallis has been nominated for a MyTheatre Award 4 out of the last 5 years for directing and acting with his company Shakespeare Bash’d. Known for bare-bones, text-focused productions staged in local bars, Bash’d is one of the most succesful indie Shakespeare producers in the city with a dependable stable of artists highlighted by James as Artistic Director and, sometimes, leading man (hence, this year’s Outstanding Actor nomination for Hamlet).

We last interviewed you for the 2013 interview series. Catch us up on your life since then.
It’s such a long time ago! The company, Shakespeare BASH’d, has had a great deal of success with a number of fantastic shows, including our first history play King John. We’ve started doing some obscure Renaissance plays as staged readings, which is one of my favourite aspects of the company now. Also, I have had the privilege of working at The Stratford Festival as an assistant director on Macbeth, Bunny a world premiere by Hannah Moscovitch and (the show I’m currently working on) Romeo and Juliet. I’ve had the amazing opportunity to work with fantastic directors such as Antoni Cimolino, Sarah Garton Stanley and Scott Wentworth. I’m very happy and lucky.

How has your work at Stratford shaped how you approach directing?
I’m still working there so it’s a continuous experience. But I must say that I’ve seen how directors of all experience levels are continually trusting their company of actors. Also, they are looking for simple approaches to make the story come alive, regardless of the kind of show they are trying to bring to life. They are also incredibly kind, humble, and happy to collaborate. I am trying to emulate that and learn from their wonderful minds and experiences.

Have you found that all your indie experience has given you a different perspective to bring into the Stratford rehearsals?
I feel that I bring a great deal of passion for the text, which is certainly there at Stratford on many levels. But I think I’m contributing to the continual exploration and excitement for the text.

Hamlet’s always been on your bucket list. Why now?
A couple of reasons: I had a director I trusted implicitly in Catherine [Rainville]. She is a very good friend, and a person who I think is incredibly talented. Also, Julia [Nish-Lapidus] and I have always wanted to play these roles and we figured why not now.

As Artistic Director, you were able to cast your own supporting players. How did you go about choosing who would populate your Denmark and in what roles?
Catherine had most of the say in this, but I must admit that my goal was to work with people whom I respected a great deal and who excited me in their roles. Jesse Nerenberg is probably one of the finest and most talented people I have worked with. Jennifer Dzialosynski has been a friend of mine for over ten years now and I think she is one of the most powerful actors I’ve ever known. Plus, getting to fight her, though I must admit it was intimidating, was an opportunity I wouldn’t pass up.

Catherine and I spoke about Rosencrantz and Guildenstern being women and we wanted to find actresses who were fun and could stand their ground. I think I had a desire to play big brother to them, so we were looking for actors where that would make sense. Daniel [Briere], David [Ross], Jane [Spence], Drew [O’Hare], Tim [MacLean] – everybody was amazing. Not to mention getting to play opposite my favourite person in the world, Julia, as Ophelia was a dream come true. Again, I was lucky that they all said yes.

What were some of the key conversations you had with your director Catherine Rainville in developing your interpretation of the role?
Catherine had very insightful views of the character’s relationships to his mother, Claudius, and Ophelia. I knew that me playing Hamlet would make him slovenly, funny and slightly curt but I was excited about that. Also, I didn’t think he wanted to kill anyone. He’s gentle. That’s what makes the task set forth by the Ghost so hard to comprehend. Catherine and I were keen on making the play intimate, almost a domestic chamber piece, and I think we were able to achieve that.

One of your strengths is the naturalism you give the verse and how human-sized your versions of famous characters are- was that more difficult when dealing with the most iconic character and words in the English canon?
I wouldn’t say so. My goal is clarity, intention, and pace. Plus, I went for absolute simplicity. But I will say those soliloquies are difficult, if for nothing else than how well people know them. I much preferred the scenes.

How did the intimacy of the Monarch affect the performance?
It was terrifying, but exactly what Shakespeare is trying to go after: it was an accessible space to hear/see the play anew.

What’s next on your Shakespeare bucket list?
I want to direct every play by the time I’m done. As an actor, Falstaff for sure and a few other surprises.

What are you up to now/next?
I will be in Stratford till June, working on Romeo and Juliet which is amazing. Shakespeare BASH’d will be announcing our season soon and I have a few exciting opportunities coming up in that. Hopefully many more things!

Is there anything you’d like to add?
Thank you again for the interview.