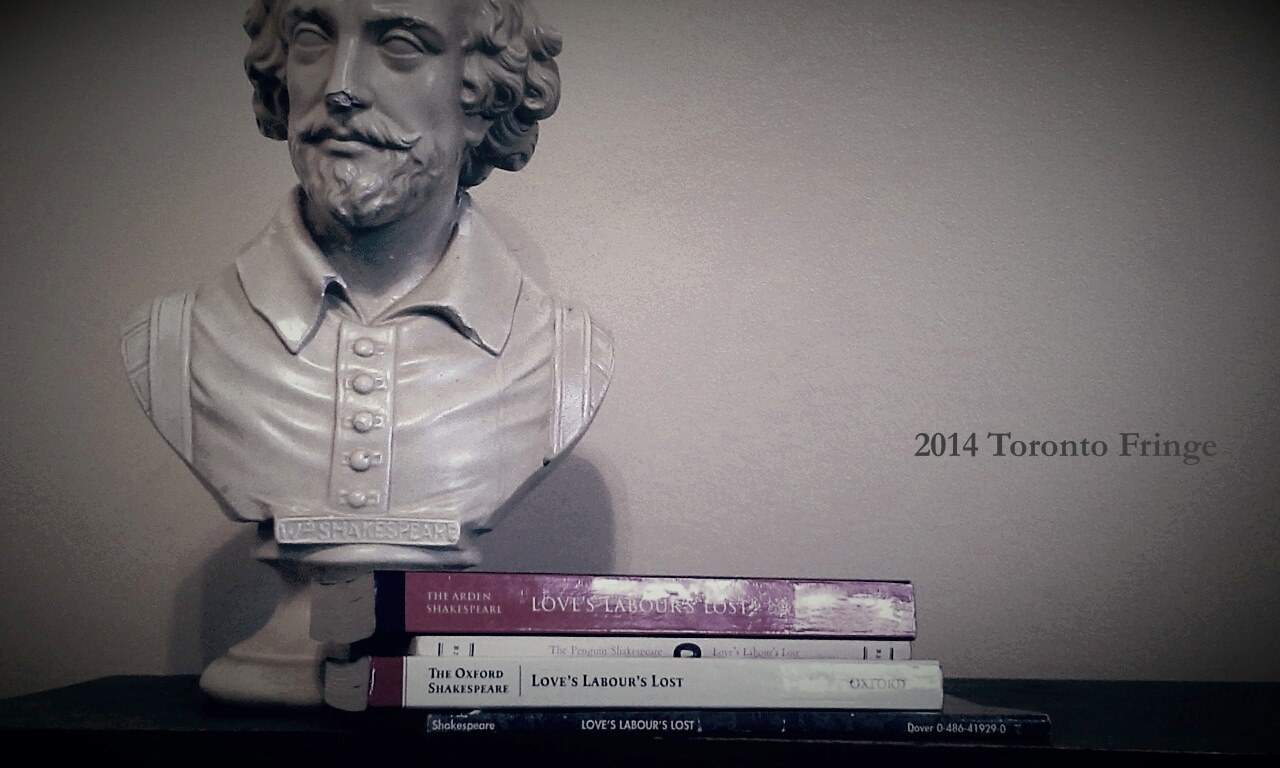 I just spent an hour and a half with Shakespeare Bash’d Artistic Director James Wallis and his wife/collaborator Julia Nish-Lapidus. The conversation sprawled- I asked them what fans of their previous Fringe hits The Taming of the Shrew and Much Ado About Nothing could expect from their upcoming Love’s Labour’s Lost; they sung the praises of their cast full of frequent Bash-ers and a bunch of new actors; I questioned Love’s Labour’s challenging verse and melancholy ending; they talked about rising to the challenge of Love’s Labour’s rhyming verse and praised its melancholy ending; we reminisced about their past great productions; I forced them to reveal what they’re working on next; I pestered James about not appearing on stage in the company’s latest work; I touted ModCloth.com when Julia complimented my dress; we talked about the Murphy’s Law target that was their recent LaBute Cycle and dove deep into the personal realities of playing emotionally exposed characters like the two Julia tackled in Reasons to be Pretty and Fat Pig. Then they left to prepare for the Shakespeare Bash’d fundraiser they’re running today and I uploaded the audio from my trusty portable recording device to my MacBook only to find nothing but garbled garbage files. It seems my recorder is not so trusty after all.

I wish I could share with you an array of well-chosen quotes from the eloquent pair as they mused about the work they’re fantastically passionate about but, alas, you’ll have to settle for my vaguely paraphrased recap (my apologies, James and Julia, I’m buying a new recorder as soon as I finish typing this). The good news for you is that it’s part of Shakespeare Bash’d’s mandate that their work takes place in social settings (okay, mostly bars), so you can grab a beer with James, Julia and the rest of their company when you see Love’s Labour’s Lost at the Victory Cafe during Toronto Fringe (July 3-13) and talk to them yourself. Trust me, fellow bard-lovers, talking to James Wallis about Shakespeare is a thing you want to do.

Here are the highlights of my morning with Shakespeare Bash’d:

Why Love’s Labour’s Lost?
With two sell-out Fringe hits under their belt (both My Theatre Award winners, btw- Best Fringe Production 2012 and Best Actress 2013), the company was ready to bring something more challenging to their favourite digs at the Victory Cafe for this year’s festival. Nothing if not ambitious, James toyed with the idea of attempting to cut Hamlet‘s 4+ hours to fit the 90 minute Fringe timeslot before deciding on another comedy in the form of the rarely produced Love’s Labour’s Lost.

Calling it a “lyrical comedy”, James thinks of the play’s rhyming verse as the inescapable element that no director can sidestep (comparable to Romeo & Juliet’s sword fights or As You Like It’s forest of Arden). The company’s put a lot of care into honouring the text but Julia insists that the rhymes fade into the background behind the truth of each character and their intentions.

As for the ring of tragedy that infects act five, Julia praises James’ decision not to shy away from the text’s darker elements (“because Shakespeare put it there on purpose”) while the director remains convinced that everything works out for the characters “a year and a day” after the action of the play ends.

Who’s in it?
There may be a sea of new faces in the cast this time around (including Bash’d newbies Josh Browne and Christopher Fowler, both past My Theatre Award nominees) but the reliable pool of frequent Bash’d collaborators definitely factored into the choice of text. Loyal patrons will recognize David Mackett as Boyet (his third show with the company) and Andrew Gaboury from last year’s Much Ado. Erstwhile Juliet Hallie Seline is playing the Princess of France, romancing last year’s villain Jesse Nerenberg as the King of Navarre (“they’re Adorable” gushes Julia), and Julia will be back onstage as well playing “the town trollop” (so she calls Jacquenetta, shooting a playfully accusatory glance at her husband who cast her in the role). But it was three-play Bash’d veteran David Ross as Don Adriano de Armado that James “needed to see” (“everybody needs to see that” adds Julia, laughing with plenty of “just you wait” subtext).

Both James and Julia emphasize the importance of finding collaborators who are “good in the [rehearsal] room” (as opposed to, you know, talented assholes) which likely explains why many of these collaborations share an origin story like that of Suzette McCanny, the actress playing Rosaline who was friends with James for years before joining forces for this show. A few of Shakespeare Bash’d’s usual suspects are missing from the cast (including Jesse Griffiths, Kyle Purcell and, most notably, Milan Malisic whom Julia calls one of her favourite scene partners) but audiences will get their first onstage glimpse of Managing Director Rob Kraszewki when the behind-the-scenes producer takes on the role of Sir Nathaniel.

How will Love’s Labour’s compare with Taming and Much Ado?
Back at the Victory Cafe for the third summer in a row, the company has gotten really comfortable in the intimate space. The same casual vibe, fast pace and beer-compatible clarity is sure to be there but James and Julia also make a point of talking about how they’ll be using the space a little differently, throwing in a sly warning that it’s an “interactive environment” when I reveal that I’ll be there on July 4th, hiding in the back corner.

This is also the biggest cast they’ve ever worked with (15) with nobody playing more than one part (in the absence of clear and thematic doubling choices like Margaret/Watchman in Much Ado, James opted to keep it simple, if crowded). And there’s the fact that Love’s Labour’s, despite its dark ending and lyrical verse, is a farce. The characters are wackier than most and their hijinks are even wackier.

What’s Shakespeare Bash’d doing next?
A full-length show (like last fall’s Romeo & Juliet) will be going up in November followed, hopefully, by another in the spring (the previously announced repertory productions have been nixed in favour of a more sensible single-show schedule). I don’t know if I’m allowed to tell you what the fall show will be but I can at least tell you that it’s one of my favourites (loyal readers/good detectives- Go!).

Let’s talk LaBute
Originally I was just supposed to meet with James to talk about the Fringe show but I asked if Julia could come along because I’ve been dying to talk to her about the LaBute Cycle she headlined back in April. Her aforementioned collaborator Milan Malisic suffered an injury just before they went into tech, resulting in the cancellation of Fat Pig (it became a one-night-only staged reading) and James (who was directing) learning the supporting role of Kent in a single day to save the would-be-cycle’s other show Reasons to be Pretty. The most pressing of my questions was “will we ever get to see Fat Pig?” which was answered with enthusiastic but vague assurances that the production will make it up at some point, possibly produced by Julia’s company Theatre Caravel (producers of my all-time favourite one-woman show).

Amidst a fascinating discussion about LaBute’s contemporary themes and limited point of view, Julia opened up about the vulnerability of lending her own face and body to characters attacked for the perceived inadequacy of their face and body. Her most interesting revelation, however, was that her co-star Elisabeth Lagerlöf felt just as uncomfortable playing “the beautiful one” as Julia did playing “the ugly one” (which makes a perfect sort of sadly ironic sense). She revealed that LaBute’s hyper-specific naturalistic dialogue is way harder to commit to memory than Shakespearean verse (unless you have James’ crazy memorization skills), that she related more to Reasons to be Pretty’s defensive and sometimes scary Steph than Fat Pig’s ebullient but self-deprecating Helen, and that her co-stars would often hug her and tell her they loved her after rehearsing a scene where they lobbed really harsh insults her way.

Connecting the LaBute Cycle to 2012’s Taming of the Shrew in which she played the oft-maligned Kate, Julia jokingly concluded that it’s time for her to play a nice, pretty girl. Maybe there’s an Ophelia or a Mistress Page in her future, but first she gets to play the town trollop.

Catch Love’s Labour’s Lost (directed by James Wallis, featuring Julia Nish-Lapidus) at the Victory Cafe during the Toronto Fringe Festival July 3-13. Tickets on-sale now (the Shakespeare Bash’d show always sells out and 100% of the tickets are available in advance this year so I recommend ordering early).