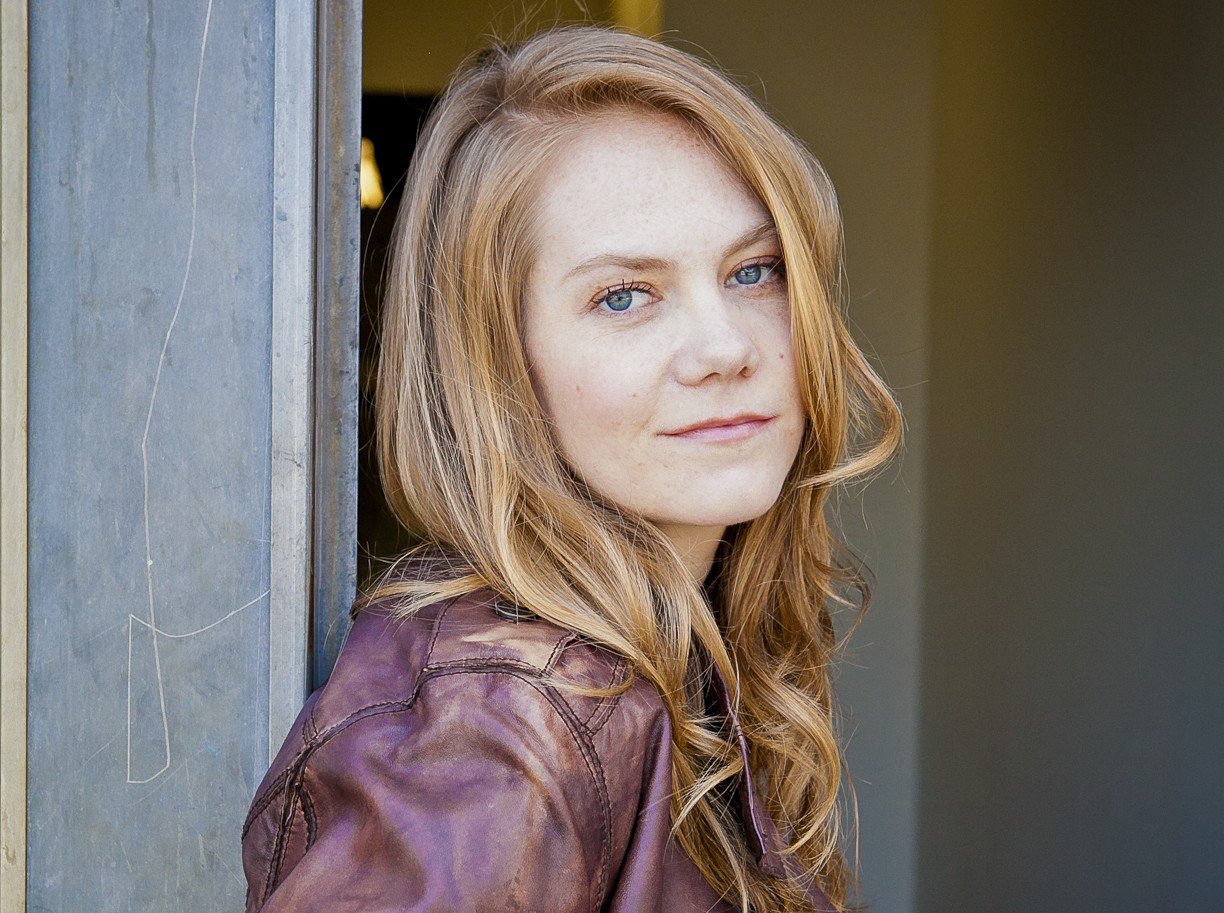 Nominated in last year’s awards for her outstanding performance in My Name is Rachel Corrie, this is Amelia Sargisson’s second time in the Nominee Interview Series. She’s back in the same category (Best Actress in a Regional Production) but for a role that couldn’t have been more different than the politically fraught one-woman show where she first caught our attention. This time, she enchanted us with her off-beat and dramatically poignant turn as Shakespeare’s dizzyingly witty comic heroine Beatrice in Much Ado About Nothing.

We chased Amelia down to make her answer more of our questions, this time about Beatrice, playing her fiance’s future cousin-in-law, and performing with one of our favourite indie companies- Shakespeare Bash’d.

Fill us in on the year you’ve had since the 2012 Nominee Interview Series?
2013 was a staggeringly enriching year, and I felt so lucky to get to work on such a variety of projects which brought me from Montreal, to St. Catharines, to Toronto and which opened me up to whole new worlds! I got to play a range of deftly-drawn characters, from an 8 year-old, self-professed expert in monsters and magical creatures, to a grief-stricken teen trying to avenge her sister’s murder, to a dotty 17th century Queen attempting to go camping, to a Shakespearean leading lady, to a bereaved woman reeling in the wake of tragedy, trying desperately to cling to the lifeboat that is love, to a joyful and curious little girl who’s raped by her brother-in-law and has her tongue cut out and withers into a desiccated shell of a person… Needless to say, there was no shortage of personal and artistic challenges to which I had to rise and I got such a high from tackling these challenges and surpassing myself and learning so much about the world from the unique perspective on life which each of these roles offered.

Perhaps the biggest thrill for me was working with such a host of inspired and inspiring artists, some of whom I was meeting for the first time and others whom I know and love but with whom I’d never had a chance to collaborate so intensely. From super experienced artists who are jewels in the Canadian theatre crown, to young movers-n-shakers on the meteoric rise, to the many brilliant women – actors, directors, designers, choreographers, choral directors, assistant directors, stage managers, production managers, artistic directors, playwrights; young or “d’un certain age” – who have become role models to me; each of these souls taught me something that I will carry with me on the long and winding road and, for that, I am so immensely grateful!

Had you played much Shakespeare before?
I cut my teeth as an actor doing Shakespeare. I worked with Shakespeare-in-the-Park in Montreal (then called Repercussion Theatre) for the first time when I was 18 years-old – before I’d even been to theatre school! I was SO green that I submitted my high school graduation photo as my headshot when I first auditioned for them! By some miracle, former Artistic Director of Repercussion Theatre, Cas Anvar, and director Kevin Orr cast me as Hermia in A Midsummer Night’s Dream, and I ended up working with the company for the following six summers – almost until I had graduated from theatre school. One of the greatest joys for me during my training was studying Shakespeare with Ian Watson and finally putting a name to/organizing my approach to many of the techniques for illuminating text which I had stumbled upon blindly and had been doing instinctually but without the rigor of a methodology to guide me.

What were some of the challenges of setting the entire action of Much Ado in a bar?
Well, the action of Much Ado About Nothing is relatively contained; more or less all of it occurs in and around Leonato’s estate. So, for me, transposing the action to a bar which Leonato owns wasn’t much of a stretch imaginatively or dramaturgically. Technically speaking, the limited space at the Victory informed our staging, and scenes requiring all 14 (!) of us to be present inevitably felt “cozy.” But I think Eric [Double, the director] did an admirable job of optimizing the space and creating a dynamic mis en scène. Much Ado makes me think of a big family doing big familial things – gossiping, carrying-on, picking fights, sticking their noses in each other’s business, torturing and loving each other the way only next-of-kin can do; but at the end of the day all is forgiven because blood, after all, is thicker than wine – and I think it’s totally fitting if we were able to make the audience feel like they were in our long, narrow living room, or family-run business, as the case may be, watching this debacle like flies on the wall. Moreover, the intimate, almost claustrophobic feel that is so easily achieved upstairs at the Victory in July with a cast of 14 and a full house of Fringe-goers very much suits the Bash’d style, I think. Wally wants the language and characters and story to be immediate and accessible and not at all lofty or erudite and when Leonato or Beatrice actually shakes your hand on the way into the bar or Dogberry’s sweat vaults from his forehead into your pint, you’re immersed in the action whether you like it or not and that, I think, is the experience Wally seeks to give his audience – one that really sweeps them up and transports them.

What were some of the unique elements that you brought to the role of Beatrice?
The wise and venerable Ian Watson, who taught me much of what I know about acting Shakespeare, once told me to be wary of any actor who says they are going to “do” a Shakespearean character – “You don’t ‘do’ Lady Macbeth. You let her do you,” he said. I’ve always tried to live by those words when I am entrusted with playing a Shakespearean role; I try to let the character’s text work its magic on me; tell me something – everything! – about the soul of the person; rather than come at it with any pre-conceived ideas. When it came to playing Beatrice, I guess I tried to explore and employ her language in order to fully inhabit her voracious spirit and notorious wit, to connect with this yearning I detected in her to be “one of the boys,” and also to bring to the fore a feeling I identified in her, and with which I myself identify, of believing you are alone in the world. I think maybe while the men were away at war, she experienced an autonomy and level of responsibility which she relished and she’s determined at the start of the play not to be displaced by the return of the prodigals. And also, as a motherless, fatherless whelp, I think she’s learned to fend for herself and that this strength and self-reliance is what informs her stance on men; she doesn’t ever want to have to rely on one, and maybe she doesn’t believe she can. So the idea of being so vulnerable as to actually love someone is terrifying to her. And then when she sees where it gets Hero, all these fears explode in her face. So beneath the brassy exterior, I guess I discovered this frightened person, one who is tough as nails and sharp as a razor, but frightened nevertheless. And I’d like to think that the attempt to activate that raw, volcanic and nebulous interior, and then cover it up with a sparkling wit and add to it a genuine joie de vivre, resulted in a complex character who could believably go from parrying verbally, to being sick with love, to weeping for her cousin’s (and her own) powerlessness, to decrying sexual inequities, to finally admitting her love for Benedick!

Do you feel more comfortable in comedy or tragedy?
I feel totally “at home” in both comedy and tragedy, and relish the opportunity to do either. One of the joys of playing Beatrice is that she inhabits both of these realms so fully. The play of course is comedic over all, but it takes a sudden and sharp turn in Act IV and it is Beatrice who becomes not only the mouthpiece but the conduit for Hero’s pain, her own pain, and the ineffable hurt of all women across the ages who have been condemned to silence and stripped of power in the face of the callousness of men. It’s a great thrill to spend three fifths of the play dishing out the sass and then to shift gears into the Chapel scene where Beatrice’s heart breaks and where – because it’s Shakespeare and it’s transcendent and the language works on so many levels – it’s not really just Beatrice’s heartbreak, it’s womankind’s heartbreak. “O god that I were a man!” Which of you ladies out there hasn’t felt that way at some point in her life?!

You and Kyle Purcell (who played Claudio) are a couple in real life. Did the director (Eric Double) ever call you out on having chemistry with the wrong leading man?
Kyle is indeed my real-life leading man. (Sorry, couldn’t help myself!) That said, he and I have been in many situations (professionally) where people have no idea that we’re an item. That wasn’t the case amidst the cast of Much Ado, many of whom, director included, are our real-life friends. As for chemistry, well, one of the thrills and challenges of the job is to give up your heart without reservation every night to your acting partner and to love, or flirt, or seduce, or pursue him/her with every fibre of your being, from heart to soul to crotch. I’d never expect anything less of Kyle and he wouldn’t ever expect anything less of me, and I say: more power to whomever gets to be on the receiving end of Kyle’s love for the run of a show.

The play ends with Beatrice and Benedick getting married. Write me a two-sentence sequel.
Benedick: Divorce? Beatrice: Where do I sign?

Did you have a favourite moment in the production?
I really loved doing the Chapel scene. It’s one of my all-time favourite scenes and navigating it with Wally was a profound experience and an immense privilege.

What are you doing now/ what’s your next project?
One of the projects to which I’m most looking forward is the Fall 2014 première of The Besetting, a collective creation on which I’ve been working for almost 3 years with nisha ahuja, Mark Cassidy, Dillan Chiblow and the rest of the amazing peeps in the Subtle Vigilance Collective. Please check it out in October 2014! And also, I’m planning my wedding. Which, believe me, is quite a production!

Do you have anything you’d like to add?
Thanks again for inviting me to participate in this Nominee Interview Series.