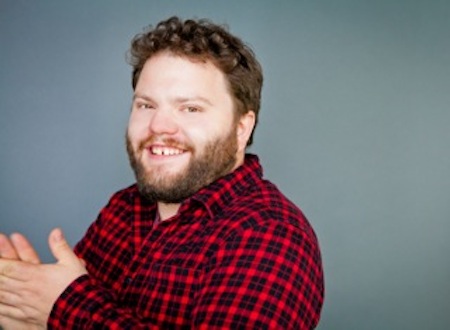 Shakespeare Bash’d Artistic Director James Wallis is nominated for his second My Theatre Award in a row for playing one of Shakespeare’s great comedic leading men at the Toronto Fringe Festival. This time around the Best Actor in a Regional Production nominee took on Much Ado About Nothing‘s bantering hero Benedick alongside fellow repeat nominee Amelia Sargisson‘s Beatrice.

Read our interview with James from last year’s Nominee Interview Series HERE then read on to find out what he’s been up to since then (we also make him answer a nerdily specific question or two about Much Ado).

Fill us in on the year you’ve had since the 2012 Nominee Interview Series.
2013 was a great year for Shakespeare BASH’d as a company. We, once again, had a completely sold out run at the Fringe with our production of Much Ado About Nothing, which was a huge success for us and a great step in our progression as a company.

After that, we were able to produce Romeo and Juliet, which was a dream come true for me. We put the play on at the 30/30 Bar in the Junction. Again we were able to sell out our run, which was amazing. It was proof that we have something to offer the theatre audiences of Toronto.

As Artistic Director, do you choose which shows Shakespeare BASH’d does? Why Much Ado About Nothing?
I choose the plays in conjunction with my General Manager, Robert Kraszewski. I give him a list of plays I think we should do, he reads them and lets me knows his opinion.

I chose Much Ado because I thought it would work well in the bar atmosphere, as it’s a witty play, full of great characters and expressive language. I wanted to show the progression of the company in conjunction with the progression of Shakespeare as a playwright. Obviously Much Ado is a more mature play than The Taming of the Shrew (less farcical and more of a festive comedy) and I thought it would showcase the company’s growth.

Also, I was really drawn to the characters of Benedick and Beatrice. I had wanted to work with Amelia Sargisson (who played Beatrice) for a very long time in those roles. The timing was right.

How do you choose which role you’re going to play? What was the appeal of Benedick?
Benedick, like Petruchio, is a part I have wanted to play for many years so it was a no brainer. Not that this fact determined our decision to present Much Ado, but it certainly was a factor.

Benedick has such great wit, which is a fantastic attribute. He is one of the most sportive talkers in Shakespeare.  Every time he opens his mouth, something is about to be challenged. Basically he’s a loud-mouth or know-it-all with a good heart, in my opinion. He’s loyal, a good friend, logical, and he’s very intelligent.

I don’t think you can put a lot over on Benedick. He’s one of the believers in Hero, because the alternative is so ridiculous. He is also a hopeless romantic but would never admit it.

This production required you to do a ton of physical comedy. Is that something that comes naturally to you?
I think so, who knows. Eric Double (our director) was a great help in finding a lot of that stuff. He’s very comfortable with physical comedy. In rehearsal you’re always throwing darts at a board in hopes that things work.

Benedick and Petruchio share that hard, unromantic shell and penchant for witty banter. They both also break down that shell when they fall for the smartest girl on the block. Compare and contrast your onstage interpretations of the two roles.
I think it’s in their motives: Petruchio is trying to find a “wife” both in the companion sense and in the business sense. Katherina intrigues him because she stands up to him but her behaviour towards him isn’t going to work. Petruchio puts himself on her level, basically showing her what she’s like, in order to gain some ground with her. Petruchio’s path to love is more deliberate.

Benedick finds himself in love, almost by accident. Not to say that there isn’t a great deal of history between Beatrice and him; there is. But Benedick doesn’t want to settle down. “I will live a bachelor” is a line that he says! Love isn’t in the cards. But Beatrice is the only person who could possibly live up to his personality. Which I would say is what brings Petruchio and Kate together. “Outsiders in love.” Shakespeare really liked that idea.

Much Ado About Nothing leaves lots of ambiguous space for actors and directors to fill in the characters’ backstories. What sort of history did your Benedick and Beatrice share?
It’s hard to get into because in the end, I’m not sure how relevant it is. It certainly colours the first scene and the party scene but after Benedick is tricked into thinking she loves him, he jumps at the opportunity to love her back. It’s always been there, it just needed the slightest nudge.

We did discuss it but I would say it’s our little secret, so to speak. We hope that people came to their own conclusions and made up their own minds.

In the 2012 Fringe you played opposite your now-wife as Kate to your Petruchio but in Much Ado About Nothing she played Ursula while Amelia Sargisson was your Beatrice. Did you ever find yourself getting stopped in rehearsal for having too much chemistry with your love interest’s handmaiden?
I can’t help chemistry can I? No, we were all completely professional. I mean Amelia’s current fiancé, Kyle Purcell, played Claudio in the show. We’re all good friends, total pros.

Did you have a favourite moment in the production?
Much Ado tested me as an individual (both as a performer and producer), but I felt that the show on a whole was so beautiful. I must say that the scene where I am being set up by Leonato, Claudio and Don Pedro was awesome; also anything with Dogberry in it; and of course the Act 4 scene with Amelia. She such a great scene partner, it was always fun to work on.

Tell us a bit about the Romeo & Juliet you directed for Shakespeare BASH’d this fall. What was it like stepping off stage and into the director’s chair?
R&J was a labour of love, truly. I had wanted to direct it since I was very young, fifteen, I think. It is truly a play that is close to my heart. It was the right step for Shakespeare BASH’d, to put a tragedy up in the bar setting. It was an experiment but a very successful one. I had an amazing company that drove me to be the best director I could, which was fantastic.

I enjoyed directing a lot, I have to say. It was so exciting being in the room with such great actors and truly that’s where I’m most at home. I like to sit and figure out the scene as best as possible and mine it for whatever it’s got.

You’re doing Love’s Labours Lost at this year’s Fringe. What can you tell us about that production?
Yes we are going back to the Victory Café with Shakespeare’s witty comedy Love’s Labour’s Lost, which we’re thrilled about.

It is a very difficult play, full of some of the most intense rhyming verse that Shakespeare has ever put on the stage, and I just finished working on Romeo and Juliet!

That being said, I am putting together some of the most amazing actors, some former company members, some new ones, and I’m absolutely stoked to jump head-first into this play.

Do you have any other projects in the works?
I’m currently working with Red One Theatre on Shrew, which plays at the Storefront Theatre from February 15th till March 2nd

After that, I am producing and directing two Neil Labute plays, reasons to be pretty and Fat Pig, in repertoire at Unit 102 Theatre April 8th till the 13th which I’m very excited about. They are both very complex and fun plays.

Do you have anything you’d like to add?
Thank you again for your very in-depth interview. Also thank you to myentertainmentworld.ca!