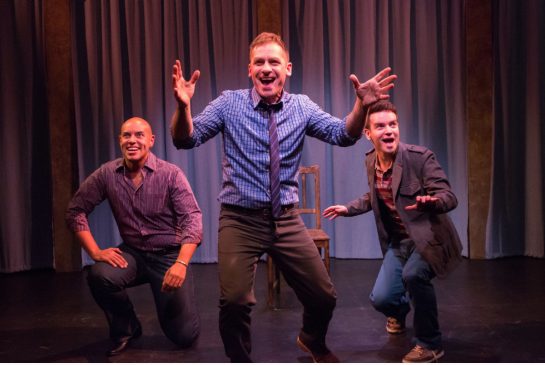 On Stage in TO: Criminally Negligent Edition

As you likely already know (because we talk about it All The Time), earlier this month we hosted Toronto’s inaugural My Theatre Awards ceremony. The awards have been around since 2010, but this was the first party. Because it was the first party, it took a ton of planning. In the process of all said planning (and the panicking, and the micromanaging of the band leader) I did something I shouldn’t have- I let a pile of reviews slip through the cracks (though I did at least make a point of reviewing the shows I felt really deserved your patronage). Apologies to all the companies who’ve been waiting for their reviews- here they are, in the order in which I neglected them. Sorry!

Goodnight Desdemona, Good Morning Juliet (Hart House Theatre)
I enjoyed most of the 2013/14 Hart House season but GDGJ really let me down. While none of the castmembers save the charming Lesley Robertson were particularly memorable, I have to blame director Carly Chamberlain for the production’s failure. It’s clear from her director’s note that Chamberlain at least attempted to take this broad comedy seriously, calling it an important feminist text- which it’s definitely not; a mediocre farce with lots of female characters does not an important feminist play make. I continue to be baffled by the generally agreed-upon regard for Ann-Marie MacDonald’s play but my argument is not with the playwright (though let’s have that argument sometime, shall we?). If you are going to attempt to take GDGJ seriously- take an honest look at the inner lives of Juliet and Desdemona, delve into Constance’s feelings of inadequacy and loneliness- then you can’t dress your cast in long johns and have Icona Pop dance parties. You can’t direct your actors as though the centuries-old icons they’re portraying are lowest-common-denominator cartoons. I don’t believe that Juliet or Desdemona is at all in need of MacDonald or Chamberlain’s help to be an interesting, rich character independent of her love interest (though they are in need of smart actresses, which most directors don’t bother to give them). But even if they did need help, they found none at Hart House.

The Seagull (The Chekhov Collective)
The Chekhov Collective’s inaugural production was fine. If this production had come from a standard community/indie theatre company- something like Alumnae- I would have called it fairly decent. There was some thoughtfulness to Peggy Coffey’s staging (especially of the play-within-the-play) and at least one really notable performance (Riley Gilchrist was great as frustrated artist Konstantine). But this was The Chekhov Collective. So named not for the playwright but for his nephew Michael who developed the method of year-long exploration this company used for their production of The Seagull. This production wasn’t nearly good enough to reflect a year of careful contemplation. There should have been revelation, instead there was merely adequacy.

Elegies: A Song Cycle (Acting Up Stage Company)
The remount of Acting Up Stage’s breakthrough 2007 production was the biggest emotional triumph I’ve seen from the company. Elegies is an imperfect song cycle and some songs did fall a little flat but far more hit me straight in the heart. The standout cast member was also the only newcomer- Joel Gomez (though I also loved Steven Gallagher’s gentle, emotional performance and Barbara Barsky’s brilliant take on “14 Dwight Ave, Natick, Massachusetts”). Gomez has one of my favourite musical theatre voices in town and it was great to see him get to deliver both the energetic comedy of the cycle’s goofiest number (“Fred”) and the emotional gut-punch of its most bittersweetly tragic (“When the Earth Stopped Turning”), not to mention the heartbreaking blend of comedy and tragedy that tore me to pieces as I over-related to “My Dogs” (Toby, you are never allowed to die). The simple staging and strong cast allowed the real strength of Elegies to shine through- the stories told through each song (“Monica & Mark” is particularly moving). A beautiful production that understandably launched Acting Up Stage to success back in 2007 brought them triumph again in 2014.

Cabaret Brise-Jour (L’Orchestra D’Hommes-Orchestres)
The imagination and musicianship of L’Orchestra d’Hommes-Orchestres is insane. Clever, unorthodox instruments combine with the inventive use of traditional instruments to brilliant effect, my favourite being a harmonica worn as a choker to create the effect of two performers necking as one played said harmonica worn by the other. The talent on stage here is unfathomable but the theatrical side of this musical performance left something to be desired.  It’s entirely a personal preference but I need a little more shape for something to be considered a piece of theatre rather than a concert. If I were someone different, I would have fallen over for Cabaret Brise-Jour but it mostly left me impressed and uninspired. I think I’m over Kurt Weill for awhile.

The Gigli Concert (Soulpepper)
Soulpepper’s having a strange 2014 so far, marked by over-long productions that are far more baffling than engaging (despite their strong casts). The Gigli Concert, for what it’s worth, is better than Idiot’s Delight but forgive me if I’m looking a little too forward to The Crucible and Angels in America (ah remounts, you’re so reliable). Diego Matamoros is wonderful as a “Dynamatologist” tasked with teaching Stuart Hughes’ enigmatic Irishman how to sing like an opera star but it was somewhat difficult to discern why we were supposed to care. With about four false endings, The Gigli Concert is something of a punishing text that leaves director Nancy Palk little room to maneuver. The performances- especially Matamaros- make this production worthwhile, but just barely.
Closing May 16th

Trudeau & the FLQ (VideoCabaret)
My first VideoCabaret show was the “History of the Village of the Small Huts” piece I was most interested in history-wise. One of the most contemporary and dramatic moments on the list of fifteen Canadian plays, the October Crisis makes perfect, high-tension fodder for VideoCab’s tighly paced storytelling. Mac Fyfe walks the line of charming and skeezy to create his broad but compelling portrait of the country’s most infamous and selectively beloved Prime Minister but the standout for me was Jacob James’ take on FLQ leader Maurice- passionate, charming and calmly diabolical- a thrillingly intriguing portrait. The 7-person cast as a whole is versatile and sharp, distinguishing a huge lot of characters and executing VideoCab’s implausibly fast scene transitions flawlessly. A must-see for history buffs and anyone looking for a fresh theatrical form (unless you’ve seen VideoCabaret before).
Closing May 10th

reasons to be pretty (The LaBute Cycle)
Stepping away from Shakespeare, the Shakespeare Bash’d folks made something of a contemporary debut with their LaBute Cycle. Sadly, said cycle turned into a single-show run when actor Milan Malisic suffered an injury that forced the demotion of Fat Pig to a single reading and director James Wallis into the role of Kent in the remaining production of reasons to be pretty. I was really sad to miss out on Fat Pig, a play I’ve long been intrigued to see, but reasons to be pretty alone proved plenty satisfying. Wallis is a text-first, low-key director , something that served him very well when working with a character-driven text like LaBute’s. He smartly kept the monologues in (those humanizing speeches were cut from the Broadway run) and added video footage of each character analyzing their own features as they spoke to the audience. The hostility and defensiveness in the character of Steph that prompts much of the action was nicely balanced by Julia Nish-Lapidus’ compelling vulnerability (extra but superficial points for her excellent act two wardrobe choices) and LaBute’s ultra-male point of view received excellent cross-examination by Wallis’ volatile Kent and Steve Boleantu’s well-meaning Greg (a role played on Broadway by the genius Thomas Sadoski). The complexity of Boleantu’s performance as Greg (careless, bewildered, guilty, defensive, lost, aspirational) ultimately made reasons to be pretty a remarkable achievement all on its own.

New Jerusalem (Harold Green Jewish Theatre Company)
David Ives’ intellectually intriguing but potentially dry play New Jerusalem rests squarely on the shoulders of the man it puts on trial- charismatic and controversial philosopher Baruch de Spinoza. Director Mitchell Cushman’s smart (if confusingly anachronistic) modernization helped give the piece a sense of relevance and urgency. Nick Blais’ gorgeous set melded industrial and devotional elements with a dash of practical stage magic for the play’s memorable final moment. Alon Nashman summoned immense authority and heartbreaking sympathy as the rabbi tasked with denouncing his beloved pupil. But it was Aris Athanasopoulos who had to make the audience admire and care for him enough to sell the emotional stakes of the entire piece. We needed to believe his thoughts and his words had the power to rock an entire community and make a good man threatening. We had to understand how so many people could both love him and condemn him. Athanasopoulos achieved all that and more. Accoutred as a modern-day against-the-grain dreamboat with too much time on his hands and too many thoughts in his head, Athanasopoulos wandered into the lobby where the play began as though he were just another bystander and immediately commanded attention. His excellent early scenes contemplating art and philosophizing on the price of fish with his best friend Simon (played charmingly with an excellent moral centre by James Graham) established Baruch as a worthy intellect and charismatic community member while his subsequent encounter with his grating love interest Clara (Amy Keating- a rare cast member I didn’t love) proved him an honorable man worthy of better than he would later receive. With the audience easily won to his side in the first twenty minutes, Athanasopoulos stood tall for the remainder of the play as attack after attack was launched his way by a series of officials (highlighted by Michael Hanrahan, lowlighted by the slightly awkward David Eisner), his own sister (Sascha Cole- at times a bit much but in possession of some much-needed wit), and eventually his own rabbi. The text gets a little lost in its own intellectualism mid-act two but this production always stayed on course, following its leading man.

Hercules (Canadian Opera Company)
Aaaannnd we’re back. Back to ridiculous acting and even more ridiculous storytelling framed by very pretty music that at times seems completely at odds with the logical emotion of the moment. After the beautiful breakthrough in my relationship with the COC that happened with A Masked Ball, I wasn’t prepared to return to the indulgent idiocy of so many opera plots. Alas, Hercules happened to me. This whole thing essentially boils down to “the world’s strongest man” being a big baby and his wife being a crazy, jealous, malicious, gullible idiot while a delightful, compassionate princess wanders around making everyone paranoid (accompanied by the regal but silent-on-account-of-not-being-an-opera-singer Kaleb Alexander). I understand and appreciate director Peter Sellars’ instinct towards modernization- he wanted to say something about war and what it does to people- but his efforts are wasted on these characters in this production (though I did like the detail of Hyllus walking with two canes Walt Jr.-style, as though sickly and therefore eternally incapable of living up to his father’s strength). The one shining light of the production is Lucy Crowe’s radiant Iole, both acted and sung with delicate nuance and inner strength. The top notes of Crowe’s remarkable voice float from her as though played on a flute, free of the heavy vibrato of many a showier soprano (a detail perfectly suiting her demure Iole). If you must see it, do so for Crowe and Crowe alone, because the rest is sheer nonsense.
Closing April 30th