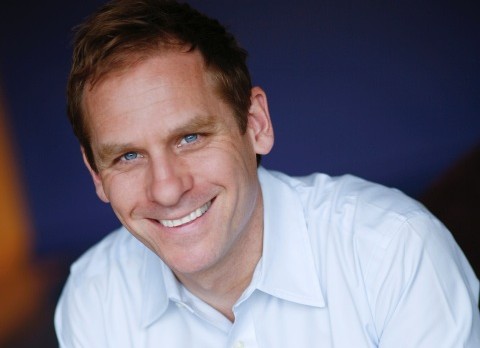 Steven Gallagher wrote our favourite original work at the 2013 Toronto Fringe Festival. His one-man show Stealing Sam was funny, heartbreaking and riveting from curtain up to curtain down, earning Steven a Best New Work nomination in this year’s My Theatre Awards.

Currently mid-run on Acting Up Stage’s moving song cycle Elegies, the multitalented playwright-actor-singer found time to join our interview series to talk about the hardships and inspirations behind his superb Fringe creation.

Can you remember your first experience with theatre?
The first memory I have of being in a theatre is when I was eight years old, my father was playing Fagin in Oliver!, and he brought me along to rehearsals every weekend . I was mesmerized. Coincidentally, I played that same role last summer, exactly forty years after he did.

What writers have always inspired you?
My favorite writers are Tony Kushner and Terrance McNally. Kushner, because he has written, in my opinion, the greatest play of the 20th Century, Angels in America. I’ve seen it six times.. Nobody can be as political and deeply philosophical as he can while at the same time being accessible and funny. McNally, because of the sheer volume and quality of work he has put out for almost fifty years, and that he continues the dialogue about to what it means to be gay. I am crazy for Love! Valour! Compassion!

Would you consider yourself primarily a writer, actor or director?
I have been an actor for 25 years. Writing is relatively new to me, but I am definitely gravitating towards doing more of it. I have recently had so many opportunities to write, it’s like fate is daring me to pursue it.

What was the first thing you ever wrote?
I wrote a play called Craplicker in 2005. It was about my struggle with Cancer and coming out as gay at a relatively late age. It had a Summerworks reading in 2006 and was produced at the 2010 Fringe.

What do you think is the best thing you’ve ever written?
So far, Stealing Sam. It’s probably the furthest from myself of anything that I’ve written, yet most people think it’s about me. So I’m very proud of that.

Tell us about your nominated play Stealing Sam. Where did the idea for that play come from?
I was working with Brian Quirt, an amazing Director/Dramaturg, taking his class at the Tarragon, and  at the beginning of each class, he made us write about our obsessions. I started writing about a lonely man who has become disillusioned with internet dating and is losing hope of ever finding someone to love.  That’s where it started, and then I received a Creators Reserve Fund Grant for the Ontario Arts Council and worked on Toronto Island at Artscape. I wrote for 12 hours a day with this little idea in my head.

Did you go through a lot of drafts? How did the play change through the development process?
I’m a pretty slow writer, and I re write, re write, re write all the time. At the end of every writing day, I read the whole play out loud and make notes and address them the next day. I guess I had about three drafts for Stealing Sam, but during rehearsals I would make little changes as we went along.

What sort of research goes into your writing?
It depends on the play. I’m a bit like Wendy Wasserstein, who steals from her own life, and those around her to get ideas. For instance, for my play Memorial, I had initially written a ten minute piece about a dying man who is planning his own funeral. That play won the Trafalgar 24 Playwriting contest and I was given a commission to expand it. At the same time, a dear friend of mine was dying of cancer and asked me to make the play about him. So my research on that one was simply honoring my friend. For Stealing Sam, I wanted to focus on how the AIDS epidemic has changed over the past twenty years, so I watched a lot of documentaries and read articles and books about medication and the stigma gay men still feel. I interviewed men with HIV and asked them about their dating experiences. I did a lot of research for that play. I really wanted to make sure I was corrrectly representing the person I was writing about.

What’s your writing process like? Do you plot and plan or just start at page 1 and work through?
I usually vomit out stuff and edit as I go along. I need to know that I have a great beginning before I move forward, and I like to know how the play is going to end. Other than that, getting from point A to point B, anything can happen!

What are some of the rewards and challenges of a one-man show?
The rewards and challenges really go hand in hand for me. There is a lot more pressure when you perform your own work, because there is no one else for the audience to blame, or celebrate. In my case the material and the performance went hand in hand. I was terrified. My director, Darcy Evans, was phenomenal in making sure that I was even keeled. I would sometimes try and change something and he would tell me that the actor should trust the writer.

Did the show change much in rehearsals?
We changed some things, but Darcy likes to work with a finished script. We mostly made cuts as we were going along. At one point I sang a song in the play, and we realized it didn’t move the play along at all. I really trusted Darcy, he has excellent taste, and the collaboration was very simpatico. For such a sad play, we laughed so much in the rehearsal room. It was pretty glorious.

It was an incredibly emotional piece. What sort of reaction did you get during and after the Fringe run?
I’ve never experienced anything like it in my career. It’s one thing to be a hit, it’s another to have people come up and thank you for writing the play.  What was really interesting to me was how universal the theme of loneliness resonates with people. They didn’t see a middle aged man struggling with AIDS and dating, but rather how difficult it is for all of us to simply make a connection with someone.

Do you have any plans for another production of Stealing Sam?
I am performing the play in June in Wakefield, Quebec as part of the Tada Theatre Festival.

Are you writing anything right now?
I am writing a couple of musicals, of all things!

You’re currently in Acting Up Stage’s production of Elegies. Tell us a bit about that production.
Elegies is a revival of the show I did for Acting Up in 2007. Most of the original cast (Thom Allison, Barbara Barsky, and Eliza-Jane Scott) have returned with one wonderful new addition, Joel Gomez.  Elegies is a Song Cycle by William Finn written to celebrate the loved ones he lost over the years. It’s a very emotional, difficult piece, there is no book, and it requires audiences to really listen to the lyrics. I love performing it, we are not using microphones so it’s very intimate. As a company, we feel very lucky to be working on such complicated material. Our director, Lezlie Wade and Musical Director, Wayne Gwillim, have been very careful not make us “repeat” anything we did seven years ago, but rather re discover it for ourselves. It was an incredible project to be part of. The audiences seem to be really moved, I think because they are able to see themselves in these stories we tell through song.

What’s your next project?
I am going to The Banff Playwriting Colony to be a member of the Acting Company, I am really excited about it.