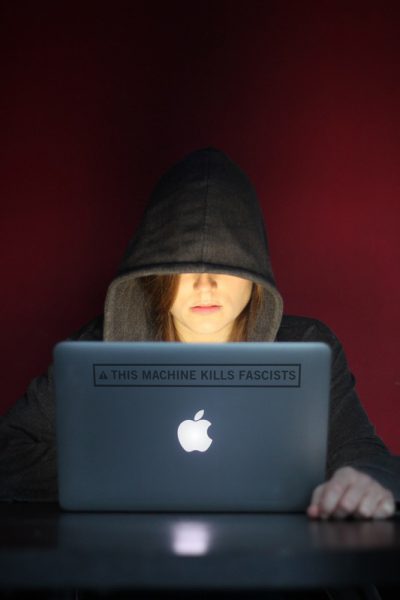 Trompe-La-Mort, or Goriot in the 21st Century (A)
The great success of Trompe-la-Mort lies in the unexpected pairing of director Ted Witzel (an avant-garde intellectual with a strong visual aesthetic and Brechtian sensibility, known for mining timely poignancy from classical texts) and playwright Anthony MacMahon (an ambitious but grounded, character-based storyteller with a flare for quickfire dialogue within a mostly realistic, contemporary style). Superficially, none of their previous work has much in common at all but both artists are strongly interested in complex intellectual themes and pressing social concerns, a fundamental commonality that makes their collaboration here feel as synchronous as it is surprising. MacMahon’s script about computer programers trying not to fuck up the world is his bigger and edgier than his previous SummerWorks offerings but is just as strong of a showcase for his emotional insight, careful plot construction and snippy smart-kid dialogue (a type he perfected with Pyotr in Wild Dogs on the Moscow Trains). MacMahon’s script is more accessible and modern (by centuries) than most of Witzel’s chosen texts, pushing the limits of his usual aesthetic and forcing a simpler, more realism-based approach. The result is a focusing of Witzel’s strengths as a director- pacing, movement, style, near constant visual interest- that challenges and ultimately brings out the best in MacMahon’s script and a universally strong ensemble of actors (including frequent MacMahon collaborator Ewa Wolniczek who yet again shines particularly brightly in a one-in-a-million role). There’s a beautiful balance to this collaboration that makes everyone’s work even better than it’s always been.

Lessons in Temperament (A)
A slam-dunk solo show in a new location for every performance, Lessons in Temperament is a personal story told by James Smith as he tunes a piano, a process that is both technically fascinating and rich with metaphor (every note has to be slightly imperfect in order for the full instrument to sound right!). Smith is an engaging storyteller and the conceit of the show gives him interesting stage business and revealing moments of improvisation when a note proves challenging to tune to perfect imperfection (it’s a new piano at every performance). The story he tells is that of his three brothers, each of whom suffers from some form of mental illness or disability. It’s a funny, emotional, sometimes terrifying story and one of the best-told of the festival.

Imaginary Anthropologies (A-)
Gabriel Dharmoo’s totally different take on a solo show flips the usual storytelling setup and makes the lone performer the demonstrator of concepts presented by filmed narrators in the form of a fake documentary about vocal traditions in diverse cultures. It’s at once a technically impressive and very serious contemplation of cultural differences and a wildly inventive skewering of imagined traditions and the way we talk about real ones. With anthropology and cultural study a defining theme of this year’s festival, this straight-faced parody is a must-see.

#7Love (B+)
The engaging ensemble of this fun and touching interactive site-specific faux-science show interviews real people (aged 7, 17, 27, 37, 47, 57, 67, 77, 87 and 97) about love. Some of their results are re-enacted (with refreshingly a-typical casting), some are screened, some are discussed, some are merely read aloud. Every audience member enters their own data into the ever-growing study, answering a questionnaire full of key, confusing questions like “what is love?”. We had to rank a list of 10 things we love in order of what we love most; I’m pretty sure I put my dog as #1. I hope this show is an ongoing project because its very nature suggests it will only get more fascinating from here.

eatingthegame (B-)
This multimedia solo show from Hong Kong Exile & Conor Wylie is both way too short and much too long. The actual “play” part is about twenty minutes. That section is a moderately effective faux-key note address by Wylie pretending to be a version of himself who became a wannabe real-estate tycoon then travelled to China for a vaguely transformative experience. Then the audience sits for five minutes waiting for something else to happen. The lights come up, the set is struck, Wylie changes into something more comfortable, and the producers are really lucky the audience doesn’t leave. After this interminable awkwardness, Wylie returns to the stage under the pretense that “SummerWorks asked us to fill out the rest of our timeslot by talking about the show”. He conducts an insightful “ice-breaker game” called “White or Asian?” (fu-GEN’s David Yee totally carried the team, shouting confident answers from the back row) and starts to unpack the creation process of eatingthegame. But make no mistake, this is still the show. Remy Siu’s elaborate design work and Wylie’s circular questions about self identity and the value/challenges of creation take over. I couldn’t help but wish the meta layer could be lifted to allow the play itself the sort of time and attention that could make it really effective.