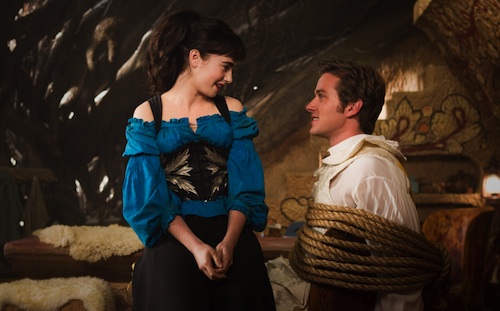 Counter-Argument: For the Love of Armie

If you are reading this, you likely already know just how much my good friend and partner in crime Rachael HATED Mirror, Mirror. If you  read this site often, you’ll probably also already know that Rachael and I hardly ever agree on anything. We generally take turns being the louder voice, sucking it up when I mildly disagree with her latest take on Smash or when she has things to nitpick in my Hunger Games review. But occasionally we hash it out with opposing articles (first attempted with polarizing Glee offerings in the past and perfected with our reader-magnet opposing Black Swan reviews). Having read Rachael’s harsh take on the new Julia Roberts-starring comedy, I went into it with trepidation, thinking “Well, I probably won’t take quite as much offense, being the pseudo-misogynist that I am, but I certainly won’t be easily impressed by the film’s lazy characterizations and pretty aesthetics. Humph”. Alas, I didn’t find said characterizations particularly lazy, and I was SO easily impressed by the pretty aesthetics (the Prettiest!) and, though I admit to being completely insensitive about such things, I came out of the film with very little clue as to what Rachael was talking about with the anti-feminism and dwarf-mocking. I kind of loved Mirror, Mirror. I mean, it’s not a revolutionary film by any means, it’s not changing any perspectives or pioneering new ground, but it’s damn entertaining, sweet and fun and exactly the kind of film that one should see after three trips to The Hunger Games.

First off, Julia Roberts is great, mostly because, as Rachael said, she seems to be having one hell of a good time. The magic mcguffin involving a weird island-through-the-mirror and creepy/serene mystical Julia is just plain stupid, the weakest storytelling aspect of the film, if you ask me. But Roberts is an icon for a reason and it’s incredibly fun to see her go after villainy with gusto. Gleeful villains are the best kind, followed swiftly by the creepy disaffected ones, and the one and only Julia Roberts strikes a delightful balance between them as The Evil Queen (I particularly loved that horrid montage of beauty “treatments” that played on some of the sadly real lengths women will go to for soft feet or smooth skin). It’s true that her arbitrary hatred of Snow White is essentially one giant dumb-ass cat fight, but while cat fights do reduce women to snivelling, petty idiots, they’re not some sort of male filmmaking construction designed to make women look like idiots. The sad truth of it is that women sometimes reduce themselves to snivelling, petty idiots by arbitrarily hating the pretty girl and fighting over a boy, and that’s what the Queen does. Because she’s a villain and a snivelling, petty Person. The fact that Snow White stays generally above such a ridiculous fray is a testament to her NOT being snivelling and petty. Because she’s the hero, and heroes, female or not, generally are neither snivelling nor petty.

Speaking of, the argument I’ve been getting from quite a few sources is that Lily Collin’s Snow White is useless and whiny, nothing but pretty. But I don’t find her useless at all, and I certainly don’t see the whinyness. Girl’s been locked in her room her whole life, of course she doesn’t know how to use a sword! I must say, she’s a quick study, though, and does a fair share of the life-saving herself (including the climactic blow, but that’s an argument for later). The moment Snow realizes there’s a kingdom that needs saving, she springs into action to try and save the damn thing. But, again, Locked In Castle, Has No Skills. It’s not a character flaw that’s she’s not particularly kickass to start with, badassery is learned and it takes Snow a cutesy montage to learn it, but she gets there eventually. She’s never gonna be Joan of Arc, but I don’t think she needs to be. There’s room for female heroes who don’t wear combat boots. Snow is smart and quick on her feet; sure, she loses her swordfight with the Prince (an admittedly awkward scene- that spanking thing just Doesn’t Read, cut it out!), but she’s been wielding a sword for a week, he’s been learning all his life. It’s Snow who figures out how to take down the Queen’s black magic puppets (and takes them down herself) and she saves the kingdom by removing the curse from “the beast” and outsmarts her previous literary incarnations by simply refusing that sinister last-ditch-attempt apple that the shrivelled Queen offers up in act three. Yes it’s an odd strategy to lock your allies out of a fight, but Snow’s reasoning is that she doesn’t want them risking their lives to save her (something that male heroes do all the time, the “you stay right here” instinct). And when they escape to come “rescue” her, they fight alongside her, not in front of her. I really don’t think there’s any reason to diminish Snow’s life-saving because most of her triumphs weren’t with sword in hand.

One of the fundamental aspects of the original story that the film does a decent job of preserving is the unique goodness of Snow. It’s not because she’s innocent, and it’s not because she’s dumb; Snow’s moral compass is stronger than every other character’s (save perhaps that lovely kitchen servant who kindly spurs her to stand up for herself). Those scene-stealing dwarfs are hilarious and fundamentally good, but when Snow reaches them they’re untrusting and defeatist, holding grudges against an entire population for the actions of a few. The Prince, too, while charming and delightful, is an ignorant jerk who bullies his valet and laughs at the dwarfs’ very existence (my favourite line of this? “you’re short and it’s funny”). The Prince’s pompous underbelly gets a little lost as the audience gets a little lost in Armie Hammer’s eyes (more on that in a moment) but it’s there in the writing, and there to see if you care to see it. Snow, on the other hand, gives the credit away when she can and defends whomever she feels needs it as soon as she knows they do. Sometimes it’s hard to like the uncompromisingly kind character, particularly if she’s a young, pretty girl in a frouffy dress (though, for the record, those eyebrows are so out of control that the “pretty” factor is less of an issue than I was expecting). The modern, independent, stand-tall kind of woman has a tendency to think that “girly” and “weak” mean the same thing. But as Rachael pointed out in her great New Girl review, that’s just as much bollocks as the idea that women have to be girly at all. The idea that “tough” and “kind” are mutually exclusive, that “sweet” and “smart” can’t go together- these are all-too commonly held beliefs, the very ones that have been damning Snow White since the movie’s release. To quote from the best, “there’s been some girl-on-girl crime going on”, and it’s not just the Queen who’s been unfairly judging Snow.

As for the dwarfs, I found their characterization fairly normal- they’re basically just a somewhat grumpy band of misfit bandits, could be any size, really- and any jokes at their expense seem to come with a purposeful sense of ignorance and carelessness. It’s ridiculous to not mention their height at all (god knows they would be the first ones armed with self-deprecating jokes, most likely) and I think the film does a pretty good of making it not a big deal.

Now, all that unpleasantness out of the way (oh, how I loathe having to defend the ingenue when I simply want to gush about my favourite actor), let’s talk about Prince Charming. He’s a jerk with some fundamental goodness, the centrepiece of the Queen’s plot and an assistant in Snow’s ultimate triumph over her- okay, that’s the boring part. He’s also pretty well written, snappy and such, which is always nice. He’s the character most exploited for his good looks (lots of shirtlessness, which is less impressive than the snappiness and mostly just silly) and at one point gets put under a spell that makes him act like a dog (a plot stolen straight from the fantastic mini-series The 10th Kingdom, but Prince Charmings and Golden Retrievers work so well in comic juxtaposition that I didn’t mind). It’s a fairly standard characterization, adhering at least somewhat to that obnoxious post-modern goldenboy=jerk mandate while keeping a central goodness in the character that almost feels like a throwback in this cynical age of anti-Winklevoss inclination. And while Armie Hammer looks not unlike a Ken doll and speaks with the authoritative baritone of a well-educated 1%-er, his Prince Charming is just simply better than his stiffly perfect trappings suggest. The role is not unlike his most famous one, that of the aforementioned Winklevoss twins,- handsome, smart, privileged, a little bit manipulated- and, like in The Social Network, Hammer makes a point of humanizing a character that a lot of people would immediately want to mock. But what makes the Prince a standout role in the actor’s young-but-impressive career is how funny it is. There’s a Sorkin-penned line or two in The Social Network that Hammer delivered with hilarious deadpan and a great sense of irony, but who knew the guy had such phenomenal comic chops?! From the slapstick of the dog bits to the straight-faced misery of wearing bunny ears at a ball to the macho physical comedy of his failure to break down the dwarfs ‘ door, Armie Hammer gives the best comedic performance of the film, easy. Pair that with his soulful turn in J. Edgar (and, of course, the Winklevi- my favourite!) and the awesomeness of Armie Hammer cannot be overstated. (Also, he just opened his own bakery! Cause he’s that awesome). Hammer’s quickly becoming one of my Hollywood favourites, to the point where the news that he’s a possibility for the role of Finnick in the upcoming Catching Fire film came as a great joy. Finnick’s my favourite Hunger Games character, and that’s a cast you don’t mess with, but the 25-year-old Hammer is literally perfect for it so he’s got my uninhibited vote.

Anyway, he’s the best ting about Mirror, Mirror, so even if you hate Lily Collins as Snow White and get bored by Julia Roberts’ lack of non-crazy character motivation and are easily offended by jerks who say mean things about dwarfs and and think the film’s stunning looks are overreaching and honestly believe that there’s some sort of anti-feminist message in there, go for Armie Hammer, because his jaunty smile and willingness to look silly make him impossible to dislike.

PS: it is important to leave as soon as “The End” appears on screen, because even if you did manage to like the movie, you will NOT like the bizarre song-and-dance number that plays alongside the credits.