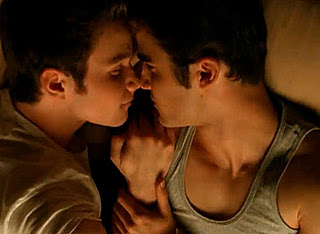 As usual, Kelly and Rachael are fighting about Glee. As usual, Kelly hated an episode Rachael loved. So in keeping with our policy of balanced evaluation (which was first attempted with polarizing Glee offerings in the past and perfected with our reader-magnet opposing Black Swan reviews on My Cinema), we’re posting a mini-series centered on last week’s episode “First Time” (with a tad bit of redemptive commentary on tonight’s offering thrown in for good measure).

Rachael shared her thoughts HERE but Kelly was (predictably) less impressed. However, tonight did ease her pain just a little bit. Read on for her thoughts.

I know, I know “Kelly’s ranting about how much she doesn’t like Glee. Again.” But the issue isn’t that I don’t like Glee, it’s that I love Glee. It’s the first thing I watch when I tune in for my Tuesday night PVR catchup (okay, I lied, that’s New Girl these days, but Glee‘s totally second). It’s nominated for multiple My TV Awards every year. Its songs dominate my iPod. I love Glee from its teen drama roots to its satirical gracenotes to its sparkling cast, bright colour palette and iTunes tie-ins (I bought their Adele mashup mere minutes ago). And like everything I love, I just want it to succeed, be the best it can be. But sometimes the things you love let you down, fall in with the wrong crowd, take wrong turns, become despicable entities that you want nothing to do with but which are tied into your unconditional love making it impossible for you to let them go no matter how mutually destructive your relationship! Okay, I may have gone a little overboard on that last one. And yes, I do realize that I’d be a lot better off just walking away and never writing about Glee again (I certainly know a fair number of people who wish I’d stop criticizing their beloved show). But I can’t. I’m in this. And I will complain about its faults and triumph in its small victories until Glee no longer matters to me. But this is love, remember? So I doubt it’ll stop mattering for quite some time. Tune out now if you must. As for the rest of you, buckle up there’s bitter disappointment ahead.

The subject matter of “First Time” is asking a lot of TV’s worst writing staff (that’s right, I said it). They were faced with finding a story that could mesh the first sexual experiences of both the show’s most beloved (Kurt and Blaine) and most reviled (Rachel and Finn) couples without the timing seeming too random, too convenient or too coincidental. So obviously the solution (random, convenient and coincidental it may have been) was to put it down to the trivial, peer-induced pressure of “selling” their roles as sexually awakened Tony and Maria in West Side Story. Sure, that makes a lot of sense. The whole thing came down to the absurd and absurdly out-of-character line muttered by Blaine backstage after a sensational Santana-led performance of “America”: “How are we, as virgins, supposed to follow that?”. Seriously Blaine?! The most handsome, charming and talented guy to ever step foot in McKinley? Earlier in this episode, you were literally described as “sex on a stick”. You want to know how your virgin ass is going to be able to perform the role you’re perfectly cast in in West Side Story? You’re going to walk out onto the stage, forget that you’ve been acting like an insecure moron for the past week and just perform freaking West Side Story! I promise, having sex with your adorable boyfriend is not going to make convincing people you’re in love with Rachel Berry any easier- that’s just not how it works. While I bought the story substantially more from the psychotically narcissistic Rachel, it was still completely unfair to Finn, not to mention lazy and rushed storytelling from the should-be-better writers. Come on people, not even stupid and rash teenagers (and certainly not this overthinking and self-centered lot) make decisions based on quite THAT flimsy a premise. Smarten up and show your characters some respect!

Okay, that was the worst of it, I promise.

Rachael’s right about the sweetness of Kurt and Blaine’s episode-ending sexual encounter. She’s also right about the solid storytelling in Kurt’s jealousy and the cracks in Blaine’s perfection (restlessness, temptation and just the right hint of sleaze that Darren Criss was able to play then backtrack flawlessly). She’s also right in being happy that the show was able to give them their moment despite any idiotic political hogwash from them backwards folk at the network’s powerful affiliates (I honestly didn’t believe for a second that they’d go through with it). She’s more right than ever when she says it’s kind of sad that we still give the producers and network extra points for basic human decency, and yet we still live in a world where Kristen Wiig is considered a genius for managing to be both female and funny and the idea that Neil Patrick Harris plays one of the most complexly heterosexual characters on TV is still surprising. So yeah, it’s stupid that I have to say this, but kudos to Fox for airing what I didn’t think they’d air and to the writing staff (see, I do believe in you!) for being brave enough to write a scene that was only more noteworthy than the heterosexual sex scenes because it featured 2 characters the audience actually likes. Also, the line “ripping off your clothes is a tall order… because of the layers”, which made me very happy.

There was some other stuff in the episode last week, I think, I don’t really remember. Oh, wait, yes I do (the sex was just so distracting that it completely trumped absolutely everything else going on in these people’s lives… oh, wait, not it didn’t). “Uptown Girl” is an all-time favourite song of mine; add to that stellar number my love of all things prep-school and the intriguing nature of the Blaine-hitter-on-er and all I want for Christmas is the announcement that Glee‘s hiring a completely new staff (I’m not budging on that point) to write a Warblers spinoff. I want! Oh, also Damian’s still being underused (not to mention poor Mike Chang!) and West Side Story was great but inexplicably rushed to the stage in storyburning the likes of which I haven’t seen since early OC. And as happy as I was to see my beloved Max Adler’s wonderfully complex Karofsky back on the screen, I was terribly disappointed by 1) his limited screentime and 2) the strangeness of his frequenting a gay bar. I get that, as closeted as he is, it’s the only place he can go to feel accepted, but I’m not sure the hulking linebacker Karofsky makes a lot of sense at a dance club; gay or not, it doesn’t feel like his scene.

Okay, back to sex, gay people, obesity, bullying and other things showrunner Ryan Murphy has massive hangups about… This Week! It was a much better episode, a pretty standard, unoffensive Glee offering full of the absurdly stupid and the decently redeeming with a twist that made it close to great. For example, I’m loving that Puck’s actually growing up, wanting to be a dad, admitting the truth about Quinn’s scheme. The fact that he’s singing rock songs about the fact that he’s lusting after his teacher/adopted baby mama instead of dealing with the interesting push and pull of his loyalties without getting sex involved? Less impressive. I liked having a brief Shelby/Rachel scene, actually I like having Shelby back in general; there’s a lot of story there, I just wish she wouldn’t kiss Puck.

I also loved Rachel and Kurt’s makeup at the end, it was really sweet and their friendship has been a highlight of the show’s later seasons. But his tirade against dodgeball as a metaphorical bullying tool was a little odd, especially since adding a salad bar (the belittled campaign promise) would probably actually have a larger impact on the students’ lives. I also couldn’t quite wrap my head around the idea that Brittany would ever campaign negatively (isn’t the point of her her naive kindness in strong contrast to Santana’s savvy cutting?) and I have no idea why suddenly McKinley has a 1980s hockey team as the villain jocks du jour. Poor Quinn deserves a decent story and Mercedes needs some real rescuing, and someone really has to do something about poor Damian’s hair.

Mashup week is always fun but the weirdness of just how much The Troubletones outperformed The New Directions was a little startling. The Mr. Schue/Shelby “You and I” duet was great (though the background enthusiasm might have been overstating it a little) and the Pat Benatar dogeball anthems were cleverly chosen (“Hit Me With Your Best Shot” and “One Way or Another”). But in the head-to-head, The New Direction’s ode to the ever-together Hall and Oates was pretty formulaic (though I will say that no matter who’s on lead, the camera is obsessed with Darren Criss) while The Troubletones’ Adele mashup was the best number I’ve seen all year from Glee (their 300th of the series, actually) If this is their sectionals matchup (assuming we live in a world where reality has even the slightest influence on the writing), The New Directions don’t stand a chance.

With the unbelievably underrated Naya Rivera (Santana) belting out the lead vocals on Adele’s gorgeous (and crazy hard) “Someone Like You”, all the episode’s silliness came crashing down as Santana sang through the fact that her world’s caving in around her. The climactic reveal that Santana’s sexuality is being outed and used against Sue in a negative campaign ad hit hard and pushed the episode firmly into “above average” territory, with the Adele mashup serving as the only possible way for her to process without collapsing completely. It was a great number (best choreography in ages) with an excellently grounded performance from Rivera and solid additional vocals from Amber Riley’s Mercedes. The idea that it was Finn’s indiscreet defense against her cruel joking that outed Santana is all the more complex. The episode ended with a reverberating slap to Finn, but if the writers know what they’re doing they’ll have not only Finn ripping himself apart for his role in the whole thing but Santana reeling from the idea that she pushed him to it, even if the result of his broken camel’s back was so grossly unfair and inappropriate. The remorse in Sue’s face was the little human touch her character had been missing since her wonderful point about Special Ed a few episodes ago. And while I sincerely hope Burt beats her out come election day, I think the abuse of Santana might just be the thing to push Sue into a fascinating well-intentioned tirade that will finally make use of Jane Lynch for something other than her comic timing. Only time will tell but this week certainly has the Glee horizon looking brighter than the last.