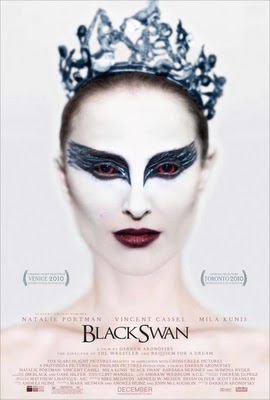 Black Swan has one of the freshest ratings on Rotten Tomatoes’ current chart. It’s got award nominations, critical praise and excellent buzz. And once again I’m left as that weird reviewer over there who just doesn’t get it. (This feels like another Slumdog Millionaire, a film which I fundamentally didn’t like, about which absolutely no one agreed with me). I hated Black Swan. And I don’t mean mildly. I found it stupid, obvious, pandering and pretentious. I will grant that Natalie Portman, Vincent Cassel, Barabara Hershey and Mila Kunis all deliver fabulous performances and that there are some interesting visuals. That is as far as I will go for this strange genre piece that feels like little more than avant-garde Oscar fodder.

The whole thing was absurd. A good thriller pulls you in; if you find yourself sitting cross-armed telling the characters how to get their act together, it’s probably not a good thing. Don’t get me wrong, I really do enjoy a good psychological thriller, and no, I am not one of those people who went in expecting a different genre then was annoyed with the film’s style. I just think this was a bad psychological thriller.

Thematically, Black Swan works as a fascinating follow-up to 2008’s sublime Aronofsky film The Wrestler. But while that film was one of the most subtle and intelligent I’ve seen in years, Black Swan hits you over the head with THEME and GENRE and ART the second you sit down. From the mandatory early shots of dancers savagely prepping their toe shoes to the overly-crescendoed Tchaikovsky score to the gratuitous intermingling of all things heavy breath worthy (dance, sex and violence- oh my!), Black Swan is a study in lack of subtlety. Is there anything less inventive than dressing your ingenue all in white and gradually introducing dark elements to her visually as she spirals into grey moral territory?! Seriously people, character by numbers isn’t a game for adults!

The central premise of the film (or rather, the film’s only plot) is the psychological meltdown of  Portman’s Nina, a girl plagued with mom issues, sex issues, food issues, self esteem issues (not-discussed but definitely relevant absent father issues) and a whole other host of crazy. In reality, Nina has to deal with a douchey but otherwise inoffensive director (Vincent Cassel), an absurd diva (Winona Ryder, in a terrifyingly over-the-top performance), a perfectly nice but I suppose mildly threatening “rival” (Kunis) and a crazy mother (Hershey)… oh, and I suppose the immense pressures of getting exactly what not only you wanted but literally asked for. Essentially, every problem in the film would go away if the girl could take the simple advice of “Get A Fucking Grip!”, something I felt like shouting perpetually during the painful 108 minutes.

It’s worth noting that if Nina’s “murder” of Lily (Kunis) had real consequences a lot of my issues would have been made much smaller. With such an unlikable heroine and no true villain, it would have been a lot more compelling if she’d had a victim other than herself (the ambiguous Lily is the perfect candidate). As it is, the only person who gets hurt is Nina, who (no empathy here) brings it largely on herself and thus, cold, heartless me simply doesn’t care. Apathy- not good.

So I know no one agrees with me, but my hatred of this film knows very few bounds. If a film’s going to be that unpleasant to watch, it has to teach me something, or inspire something. All Black Swan inspired was anger.