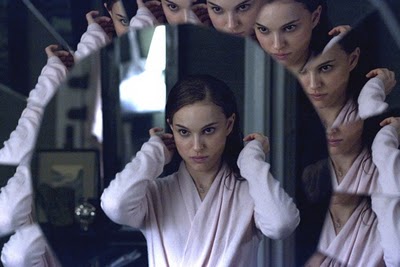 a review by Rachael

Some movies are all about the interaction between the audience and the film. Most comedies are like this. You are meant to react to the movie as yourself, and it is almost as though a conversation is going on between you (as audience member) and the story being told, but you remain remote and yourself throughout the viewing experience, even as you are pulled into the story.

Other stories immerse you, surround you, bury your own consciousness within the frame of the film’s consciousness and leave you completely vulnerable to the attack of what’s on the screen. Good horror films do this. It’s why in many bad horror films there is a moment when you pull back, realize that the things on screen could never actually occur. Suddenly, you are no longer immersed in the film’s narrative, you are a separate entity easily capable of dissecting the bad guy’s idiotic schemes in carefully chosen phrases like, “But why would a primordial evil make a video tape?”

Saying up front, I think he did. For the two hours I spent watching Black Swan, I could feel the ordinary Rachael mind frame slipping away to be temporarily replaced with the horrid drama of ballerina Nina’s descent. This complete immersion (which, yes, also mirrors the horror going on within the movie) is what keeps you glued to the screen.

Black Swan follows the travails of Nina (Natalie Portman), a struggling but talented ballerina obsessed with perfection at her art to the extent that it stunts her emotional, physical and sexual growth. All three are important within the film. She lives in her mother’s house surrounded by the fluffy pink relics of childhood that should have long past. Her mother remains a constant presence in her life, controlling her decisions and attempting to keep her in a state of perpetual 10-year-old-ballerina. Her lanky, too-thin body seems simultaneously capable of impossible feats and stunted and bruised. And as for her sexual growth, despite her claim of having had a few boyfriends, its obvious that this perpetual victim has no claim over her own sexuality, having completely subverted it in order to achieve some sort of chaste perfection.

Nina has been perpetually ignored for starring roles until the chance comes to play the Swan Queen in Swan Lake. The director (played with charming-but-creepy-french-perfection by Vincent Cassel) knows she’s perfect for the White Swan, but doubts her ability to plumb her sexuality and depths for the role of the duplicitous black swan. As Nina dives in as deep as she dares, her already tenuous grasp on reality begins to falter, and we’re taken into a head dive of jealousy and self-torture in the form of terrifying visions of swan-transformations and Mila Kunis (who, in this film, possesses a fiery, world-weary passion I would not have expected from the erst-while Jackie).

The film is a visual splendor, mixing reality and fantasy but always remaining grounded in the dark shadows of the best horror films. And Arronofsky uses his always interesting, but occasionally off putting, visual flair to good use in this overtly theatrical yet “stripped down” rendition of psychosis.
Thematically, the film fits in perfectly with Arronofosky’s previous effort, The Wrestler, which saw a washed up wrestling star desperate to regain his life after years of literally sacrificing his body, health, and sanity to his sport. Nina may not envy Mickey Rourke’s steroid-induced musculature, but she would recognize a kindred spirit in his self-sacrificing quest for perfection of a very specific variety.
But the depths to which Nina sinks, and the extent to which she loses herself within her performance, are also much deeper reflections on the relationship between art, artist, and viewer. As portrayed by Natalie Portman, Nina is not a likable character, but by the end of the film we believe in her quest. In the tragic final scenes, even as hope seemed to dash out of frame with Nina’s every grasp towards it, I still felt her drive and passion for performance so acutely that I, like Nina, was willing for her to forego all other measures of sanity and success in pursuit of it. This story, whatever the stagecraft around it, belongs to Nina and our investment in her as a character and Portman as a performer is deeply necessary to the film’s success.

Much has been made in the press about Natalie Portman’s physical transformation. The already pretty tiny actress dropped about 20 lbs for the role and endured a fairly Nina-esque training regimen for the part. A few websites are decrying this as poor role modeling (never mind that Christian Bale does it for nearly every role, and everyone in the press calls it actorly heroism), but this method dedication to the role pays off in how deeply invested we are in Nina’s struggle, even as we know that it isn’t healthy, sane, or going to end particularly well.

In the end, Black Swan is a dark, occasionally pretentious film firing on all cylinders, with the art and stagecraft backed up by a compelling psychological premise. On top of that, it’s a surprisingly adept genre film, proving that scares don’t come from excessive blood and torture but through the expert application of film techniques that draw the viewer so completely into the picture that it feels almost as if their safety is threatened along with Nina’s.