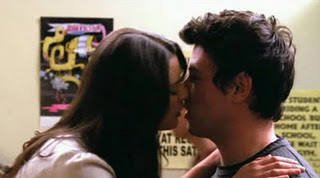 As usual, Kelly and Rachael are fighting about Glee. As usual, Kelly hated an episode Rachael loved. So in keeping with our policy of balanced evaluation (which was first attempted with polarizing Glee offerings in the past and perfected with our reader-magnet opposing Black Swan reviews on My Cinema), we’re posting a mini-series centered on last week’s episode “First Time” (with a tad bit of redemptive commentary on tonight’s offering thrown in for good measure).

First up is Rachael, the forgiving and optimistic one.

There’s definitely times when I wonder why I still watch Glee. I don’t write about it (most of the time, I let Kelly take the Glee reigns, since she has a much more defined viewpoint on the show), but I often find myself metaphorically bashing my head against the wall in frustration with the series for consistently failing to be as good as it should be.

And then, episodes like “First Time” come along, and I remember: Glee, firing on all cylinders, is capable of taking the drama of high school, growing up, and performing and translate it into transcendent musical numbers and well played melodrama.

“First Time”, as that delightfully on-the-nose title indicates, is all about our favorite McKinley High couples doing it. And it proves to be one of the more interesting takes on that particular right of passage. Rachel/ Finn and Kurt/Blaine decide that the time has come to have sex, and they spend the majority of the episode weighing the relative merits of that idea while simultaneously examining what their relationships mean to them. As I said, it works. Watching Finn and Rachel deal with their obvious differences (her passion for acting and being “A STAR”, his paralyzing fear that he’ll never make it out of Ohio) while also hearing the other girls’ interesting takes on their own first times* is great. I don’t love that Rachel thinks taking her virginity is enough to make Finn special, but it’s character appropriate at least.

As for Kurt and Blaine, well, I was never not going to like a story that focused on their relationship, since it’s pretty much the only one I care about on this show (although if anyone ever hurts Mike Chang, I might have to murder them**). But I liked the way it played out. I liked the way Kurt’s jealousy was simultaneously unfounded and totally understandable. I liked that Blaine was a little less perfect than he normally is (since he’s normally way too much of gay Jesus) while never crossing a line. And I liked that a mainstream TV show let them have sex and let it be the most romantic moment the show has ever conjured. Maybe Glee shouldn’t get points for that (in fact, it definitely shouldn’t), but it was still nice. And I LOVED that Kurt’s dream first time is in a field of lilies with Taylor Lautner “before he gets fat.”

On top of that, it’s the first time for McKinley High’s musical. I’m a sucker for West Side Story. And ever since Santana got cast as Anita, I was dying to hear her take on “America”. I even liked the direction of the scene, with the addition of the Jets coming in to add insult to racially charged injury.

**I will say that the conclusion to the affecting Mike Chang storyline from earlier this season (where his parents don’t want him to be in the play) was incredibly rushed and lame. I hope they come back to this. Mike Chang deserves better. But to balance that out, I sort of loved Kurt and Karofsky’s moment in the gay bar.