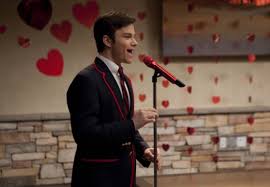 After an underwhelming (to some down right maddening) post-Super Bowl episode, Gleereturned tonight with something that was so perfect I almost wanted to vomit.

Mostly that vomit came from how damn uncomfortable I was through half the episode. Unrequited love always makes me uncomfortable on the screen, and seeing the season long flirtation between Kurt and Blaine teeter dangerously close to Kurt getting his heart broken for realsies was almost enough to make me die from embarrassment. On top of that, Puck singing his heart out to the newest member of Glee club to the tune of “Fat Bottom Girls” or Rachel trying desperately to vie her way back into Finn’s affections despite his recent reaffirmation of his feelings for Quinn…
This was Glee at its squirmy best. I was so excited when Lauren turned down Puck (because, seriously dude, what girl wants you to sing to her about how, yeah she’s fat but you want to bone her anyway?). And watching Kurt “man up” and help his friend Blaine out even when it hurt him was nothing short of brilliant. Even the aforementioned (and somewhat painfully perfect) Blaine’s overly sincere sung valentine at The Gap was painful goodness, so much so that I am literally covering my eyes and squealing at my computer. And Kurt finally fulfilling the brazen badassness inherent in his character and TELLING Blaine what he thought was going on with the two of them? OH MY GOD. Pitch perfect, painful, and a gorgeous note for the character. Even if it didn’t lead to immediate “macking out” (thanks Puck, for bringing that expression into my lexicon).
On top of that, the over-the-top ridiculousness was played pitch perfect with Santana’s mono-induced revenge scheme. I even liked Finn’s sudden transformation from somewhat-dumb but ultimately good-natured to conceited schemer. And Tina breaking down into melodramatic tears during “My Funny Valentine?” I can do that level of melodrama, Glee, even if it did leave me slightly bemused.
The big finish, with Gleeclubbers past, present (and dare I say future, Blaine?) hanging out with the Warblers as they celebrated the holiday was a nice little bittersweet candle, whether because Blaine singles out Santana as the one most likely to never fall in love, or for the confused and yet blatantly sexual looks shared between Blaine and Kurt throughout. This episode rebuilt the casts relationships even as it tore them down, restating not only the legitimacy of Finn’s feelings for both of the women in his life and Puck’s feelings for anything with breasts, but also instilling in the club a sense of friendship and genuine affection that has been sorely lacking in episodes more concerned with spectacle than substance.
Also, side note, any time Mike Chang can do a random and pointless dance number in the middle of the show.
Additional side note, while I love the ego-kick of making Kurt sing mostly back up now, how is it that Blaine is the only person to EVER have solos?