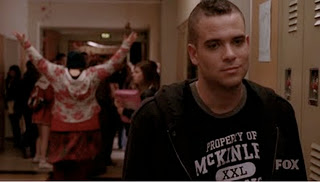 Rachael’s already posted about how great the second Glee of the week was, but having just watched it (finally), I have to put my two cents in, if only because I am a firm believer in expressing your love when it’s there, especially if the last thing you did was express something less lovely.

It’s no secret that I hated the post-Superbowl episode. It was, as Rachael said, “more spectacle than substance”, it felt like season one- all points and themes, no actual STUFF.

But “Silly Love Songs”… Only 2 days later, Glee came back with what has quickly become one of my favourite episodes of the series so far. They’re back on the promising track season 2 has been on since “Duets”. From Santana’s mean girl breakdown about being called a mean girl to Lauren’s incredible high standards to Mercedes’ perspective on the state of boy-craziness vs. lonely optimism, this episode seemed tailor-made for my own ever-contradictory views on romance. And it’s embarrassingly loud beating heart of schmoopiness just further proved that point. By the time the characters assembled for a “lonely hearts dinner” featuring a Warblers ode to love, any memory of Sunday’s heartbreaking letdown had vanished.

Obviously, Kurt and Blaine’s story takes the prize as the best. It took the characters to wonderful new and deepening places- taking Blaine off his pedestal and allowing Kurt his first true selfless act of love in the series (the line “man up, you’re amazing”, that kind of sacrifice is what real love is, not the whiny selfishness of his crush on Finn)- but it also furthered developed their crazy chemistry, invoked honesty as the means to both embarrassment and happiness and solidified the most complexly human relationship the show’s ever done (their confusion, self-denial, obsession with analysis and genuine terror of losing each other- it’s positively real). It was also just plain cute, I love the detail of knowing someone’s coffee order. I was so happy to see that Blaine’s over-the-top GAP performance had consequences and to see him expose some imperfection. I was also incredibly happy to see Kurt be just as brave as Blaine, if not braver. Here’s to some truly exceptional story telling.

Other highlights included Mercedes and Kurt calling Rachel out on shifting the conversation to her own problems, the adorable chemistry between Tina and Mike (even if her breakdown was a tad too silly), Santana’s loneliness and insecurity-fueled revenge plan and the greatness that was “Firework”.

Puck’s amazing performance of  “Fat Bottomed Girls” made my day for lots of reasons. Of course, I loved how Lauren made a point of saying it was offensive but also didn’t dwell on it. And I like any time Puck takes the lead on a song. But mostly I liked it because Queen trumps everyone else every day of the week and twice on Sunday. That story as a whole is kind of silly  (I really don’t buy it for a second) but Lauren is pretty damn cool (as is Puck) and the show seems to be handling it without any trace of the condescension they give Mercedes’ stories, so I’m on board. The line “I look how America looks, and like America I need more than a song to get my juices flowing” was pretty gross (cheesy, clunky and false all in one go) but “what makes you think that men treat me badly?” more than made up for it. I like that men don’t treat Lauren badly, because she would never let them. I only wish the other girls in the show would take a page from her and get away from Finn (who throws out the token “sweet” card every once in awhile but is ultimately not worth it).

“Silly Love Songs” was simply wonderful. And, even though I’m being repetitive, I just wanted to say that. Because I loved it. Glee (well, a lot of things really) gets a lot flack from me, so when I love something I say it. And celebrate it. And sing silly love songs.