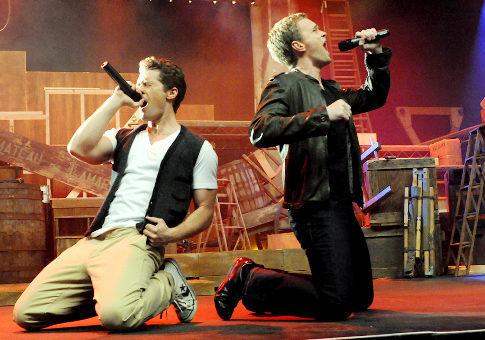 Maybe it’s the rosy Joss Whedon glow (and I need to go back to watch previous episodes to tell if the directing really was that much better this episode, or if I was just more inclined to notice it), but I kind of loved this week’s Glee. I think this was the show I was signing up for, the melancholy, pessimistically-hopeful musical that ends, not in “Don’t Stop Believing” but in a bittersweet, darkly lit, and brilliantly acted rendition of “Dream A Little Dream of Me.”
Not every bit worked (I can certainly see what Kelly’s saying about the dialogue and theme-bludgeoning, even if they don’t distract/detract the way they do for Kelly), but I really connected with the characters this week. Glee is never going to be a show that shocks me or brings me to transcendent levels of understanding the human consciousness (I’ll leave that for true Joss Whedon shows, not just the ones he’s guest directing), but it is a show that shows me a little slice of life, spices it up with jazz hands, and occasionally is just absurd enough to make me forget the melancholy core beating at the heart of the show.

But it’s the melancholy core (something that actually IS incredibly prevalent in Joss’s work) that keeps me coming back, that sustains me through the joyful ridiculousness of Madonna themed episodes (which for the record I love too, just in a different way), and that makes me invest so deeply in these characters. Sure, Will is all sorts of inspiring, Robin-William-esque mentor guy, but he’s also a dude who has a failed marriage and a stalled career. Artie will never walk again. Rachel will probably never be a star. Kurt will never have the relationship he wants with his father. Finn will marry some townie and Quinn is giving birth to a baby sure to be born with a mohawk and a bad attitude. But I think what Glee does well is not just make us forget about their obvious tragedies, but actually make us understand that life is still worth it despite the tragedy.

The title, then, becomes both ironic half-smile and the true “dream” of the entire Glee cast of characters. They’re chasing those moments of Glee, and, for me at least, this week the show found them.