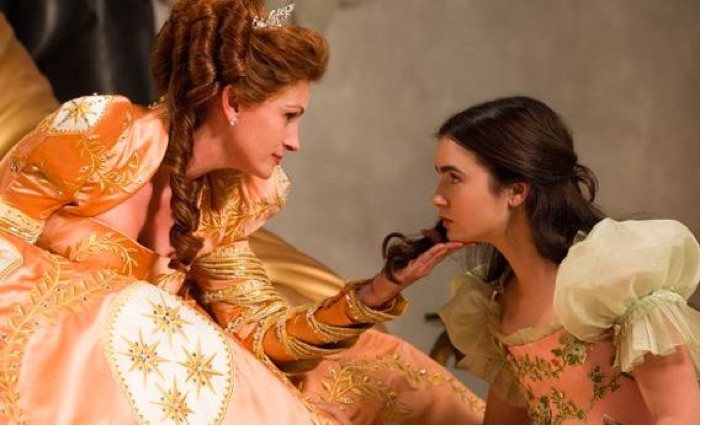 Mirror, Mirror, get the hell off my damn wall!

I wasn’t going to write about Mirror, Mirror. The movie, to me, was so obviously horrendous that my vicious take down of it would just seem like a bunch of humorless whining. Then I stumbled upon a surprising number of positive reviews and I felt compelled to share (for the record, it’s getting a 55% approval rating of Rotten Tomatoes, which just feels too high).

And my apologies for being predictable, but you should know up front I’m about to get a little feministy.

The problem with most modern fairy tale adaptations is that they have to deal with stories that often turned women into objects and with time periods that often thought that “women’s rights” was a confusing term. It’s why, where we once had Sleeping Beauty, Cinderella and Snow White, Disney now gives us Mulan, Rapunzel and Tiana. If you haven’t spent a lot of your adult life analyzing these movies’ messages, let me spell it out: The first three were all saved by male protagonists and put down by female antagonists. The latter three all did their own damn saving, thank you very much, and contained a lot less gender interpretation in the form of their antagonists (yes, it was Rapunzel’s defacto step mother, but at least her real mom didn’t die and was there to be supportive and awesome at the end). I think nitpicking early Disney films is a fool’s errand, mainly because people are allowed to adore things that may not speak exactly to their world view and there’s no way you’re ever going to talk them out of it (nor should you want to, you anti-fun feminazi). Plus, why bother getting absurdly annoyed about things that don’t affect you?

Anyway, modern fairytales are really aware of years and years of feminist theory and relatively normal people complaining about the role of women within fairytales and Disney-style stories, and they are partially created as a reaction to that. Think of Enchanted or ABC’s Once Upon a Time, both modern remakings of classic tropes that try (to varying degrees of success) to redefine their female protagonists’ roles. In the recent Hollywood rush to remake classic stories, studios and screenwriters have to deal with the perceived sexism of these stories in order to cash in on nostalgia (and cool story ideas).

Mirror, Mirror, the much sillier-looking adaptation of the Disney classic Snow White coming out this year (THIS being the other one), focuses a bit more on the evil queen and her antics to ensnare Prince Charming. Snow White is a pretty, dark-haired cipher who smiles her way through the picture. And, honestly, I wouldn’t even be making a case against such a silly movie if it weren’t for the fact that it clearly THINKS it’s a feminist reimagining. There’s a moment late in the film when Snow White inexplicably locks Prince Charming and the dwarves up before she goes off to “fight” a climactic battle and gives a cute little meta speech about changing the story of the prince saving the princess. Sounds really cool and affirming, right?

Except that, as the scene plays out, she’s wrong. Snow White is quickly disarmed and close to death, only to be saved by the intervention/distraction from Prince Charming and the dwarves. Plus, as far as battle strategies go, locking up all your allies and facing a tremendous beast alone is probably not the world’s best plan.

This also ignores a movie’s worth of grossly outdated stereotypes and awkwardness. As cute and, well, charming as Armie Hammer is as the aptly named Prince, it’s a little hard to buy him as a credible romantic lead after he repeatedly slaps Snow White on the ass with his sword and then condescendingly asks her if she “liked her spankings.” In a better movie, maybe this is a send up of misogynistic tropes. In this movie, it’s supposed to be a funny joke. Even Snow’s eventual defeat of Charming is based on trickery and luck more than it is on talent.

Which is to say nothing of the weird insect rape joke, the general uselessness of Snow White’s character, and the fact that in the movie there are countless loveable male characters and exactly one “good” female character, who is basically defined by how untouched she is by society.

Just to prove this isn’t all my particular form of over-sensitivity, the movie has the exact same problem dealing with the issues of dwarves as it does with feminism. Namely, it seems acutely aware of the often offensive portrayals that have characterized dwarves in popular culture up until this point, and it nominally tries to address these. But the film also perpetuates just as many sins against the men who play sidekick to its protagonist, often running straight into other stereotypes and offensive characterizations on its way to avoid the typical mistakes.

Mirror, Mirror also just isn’t a good movie, with plot points that jump around and often seem intended just to pad out the story length and an oddly erratic mythology. Julia Roberts, however, seems to be having a lot of fun in her role as the Evil Queen, and she almost sells some of the storyline. Armie Hammer, similarly, brings a lot to Prince Charming, and not just in the form of his often ogled chest (see, the movie is exploitive both ways). I just feel like if your movie has me wishing for a Kristen Stewart-starring movie for better female characterization, you’ve got a problem on your hands.

I started off this review by warning you that I was about to get feministy. But I actually kind of reject that characterization (even if I gave it to myself). Complaining that a movie gives short shrift to its characters, even within the confines of it being a truly silly film, isn’t just a lady problem, or at least it shouldn’t be. And complaining that it can’t contain its own themes isn’t feministy- that’s just basic story telling.