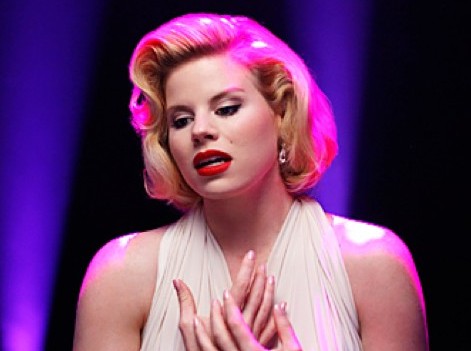 Sometimes I think I may be the ideal audience for NBC’s Smash. I was into theater my whole life, having gotten my start performing intricately choreographed numbers to Ace of Base’s “I Saw the Sign” at age 6. But I’m also uninformed enough not to question the legitimacy of a serious New York City venue putting on a Bruno Mars show.

Despite this willingness to hang out wherever the story wants to put me, my thinking brain is starting to bump up against my enjoyment brain. I’ve noticed it since the beginning, when I could help thinking that Ivy was so much better than Karen that it made the whole audition/call back drama feel horribly forced, but it roared back into contention this week.

I love that Smash is realistic enough to realize that the Marilyn musical, as it is, can’t wow anyone, let alone floor seasoned New York theater professionals. And I even like that the show doesn’t feel the need to spell out or overly indicate why Ivy’s performance was “off.” Ivy is a professional Broadway star, and she’s not liable to blatantly bomb a performance, even if everyone around her is playing counter-productive mind games with her. I respect that the show doesn’t feel the need to dumb down what’s happening on screen to help play to the uninitiated (I consider myself one of them, for the record).

But the show can’t keep telling me one thing while showing me another one. Namely, I can’t be expected to keep believing that Karen is causing all sorts of music professionals to lose their practiced cool, while everyone just keeps dumping on Ivy. Megan Hilty is charisma incarnate, and her performance as Marilyn is vulnerable, breath taking, sexy and unique. With the exception of when she went all squeaky-voiced last week, she’s never been short of beautiful when singing. And during her big debut during this week’s workshop, I could see why the SHOW seemed unfinished, but not how any of it came down to Ivy.

More importantly, however, is that the show can’t keep telling me that Michael is perfect for his role as Joe Dimaggio and that he is such an amazing talent. I’ve yet to see a single performance by Will Chase that has left me a third as breath-taken as I am when Hilty belts out “Let Me Be Your Star.” And this week’s episode was by far the worst with this. The scene where Tom tries to defend Ivy by taking down Michael was supposed to seem like Michael was being punished for his affair with Julia. I get that. But instead it seemed like a by far more legitimate critique of the show than those being thrown at Ivy. And having Derek defend Michael with a self-righteous, “are you mental? He was perfect,” makes it seem like either Derek’s an idiot, or he really is only the self-serving manipulator Tom accuses him of being.

I really like Smash. It’s smart, funny, and consistently entertaining. But the whole thing will feel more authentic when they stop trying to cram down expected dramatic beats, as though reading through a checklist of the season’s narrative without any regard for what actually ends up on screen. There are totally legitimate ways to threaten Ivy’s job or performance (I like the idea that they might need an A-list star in order to get funding) without just telling us she’s not as wonderful as our eyes and ears can tell she is. And I’m sorry, but I’m never really going to buy Katharine McPhee’s Karen as a threat to Ivy. McPhee has a lovely voice, and is surprisingly not annoying on the show, but she’s not Hilty.