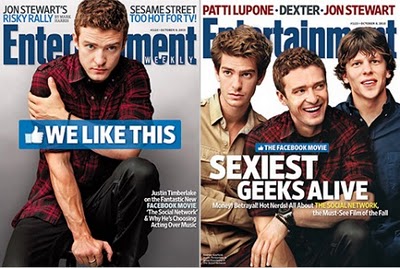 Earlier this year my father bought Life Magazine’s “100 People Who Changed the World”. I read the thing cover to cover. There were tons of omissions, none quite so confounding to me as Mark Zuckerberg, the founder of Facebook. My dad didn’t understand why I insisted that the 26-year-old billionaire should be on the list, “Facebook’ll be gone in 5 years” he argued. Well, I highly doubt that, I actually think it will morph and grow to the point where there’s hardly a need for external websites (really all it needs is a live video chat, a document-sharing/sending method and a comprehensive online shopping component and Facebook will include every top web activity their is). But even if Facebook ceases to exist, the next big thing comes along and usurps its throne, it has already changed the world. It’s a noun, multiple verbs and an adjective. It’s changed how we interact with one another and how we present ourselves to the world, how stars rise, politicians campaign, humanitarian funds are raised and protests start. Sean Parker and Napster changed the music industry forever, Mark Zuckerberg and Facebook changed the world.

With such scope of influence, every event in Facebook’s evolution had the power to affect the entire world. That’s the story The Social Network tells, a small story of friends and foes, egos and emotions, jealousies, insecurities and hurt as played out with international reverberations. I’ve often said that screenwriter Aaron Sorkin’s work is Shakespearean in tone: grand, poetic, rich in character detail. But nothing is more Shakespearean than a personal story with larger than life consequences. The intricate and engrossing story of The Social Network is beautifully told and Sorkin’s is the perfect unique voice to hear it in.

Perhaps the film’s greatest strength is the complexity of its characters. Zuckerberg is neither hero nor villain, but rather a guy, a flawed every man whose surplus of intelligence creates a natural deficiency in social arenas. As played to perfection by indie darling Jesse Eisenberg, Zuckerberg inspires frustration and incredible pathos in almost equal supply. He lacks tact and is a terrible judge of character but he means well, I didn’t doubt that for a second. He’s remarkable for so many things: his genius, his wit, even some of his priorities (money and female attention take a backseat to ambition and acceptance); and reprehensible for others: his thoughtlessness, his arrogance, his obsession with social improvement, his lack of loyalty (though there’s a great moment at the end that throws this particular issue into question a bit). Despite being based on a real person, Eisenberg’s Zuckerberg is a film conception, a complex human character rather than an accurate portrayal of the human himself.

The other characters are given similarly complex portrayals. The twin golden boys Cameron and Tyler Winkelvoss (Armie Hammer) who sue Mark for stealing their website idea could easily have become villains, but Sorkin writes them as conflicted good guys both pissed off at being beaten at their own game and cautious of being taken advantage of.

Eduardo Saverin (played with pitch perfect empathy by Andrew Garfield), the other character in direct opposition to our “hero”, is actually the most easily likable person in the film in my opinion. Unrelentingly loyal until pushed beyond his breaking point, and armed with good business sense and an accurate judge of character, Eduardo is the put-upon victim of the film’s events. However, his hesitation to join the company in California, his traditional approach to a non-traditional venture, and his too-trusting nature make him an easy target. Eduardo also serves as Mark’s proxy to the outside world in a lot of ways. He’s the translator who understands both the socially strange Zuckerberg and the world he struggles to interact with. At the end of the film, though he’s been taken advantage of and stabbed in the back in many ways, one gets the sense that Eduardo will be just fine. But as a particularly heart-wrenching scene points out, he was Mark’s only friend. Without Eduardo, Mark is alone. Successful, famous, powerful and alone. It’s Mark whose ending has the ring of tragedy to it.

The one character complaint I have is the simplicity of Sean Parker. Compared to the other characters, Parker (played with wonderful irony by Justin Timberlake, one of the foremost musicians affected by the rise of Napster) is not very interesting. He is tricky and engaging but ultimately too obviously devious to really win me over. A more complex portrayal of Parker could better explain the allure he held for Zuckerberg. As it is, that pull shows the weakness of Zuckerberg more than the power of Parker. Although maybe that’s the point (and who doesn’t love Justin?!)

But what’s one tiny little complaint in the world of awesome that is The Social Network?

The intricate characters exist in a cinematic world perfectly constructed by director David Fincher, within a story that is endlessly fascinating, superbly timely and undeniably engrossing. The pacing of this wonderful drama/thriller/origin story hybrid is dead on and the dialogue clever as hell (naturally, with my beloved Sorkin holding the pen). A character-perfect quip about BU’s lighter workload effectively has insecure students up in arms and the throw-away use of one of my favourite grammar jokes (Winklevi!) had me cheering with geeky delight. Sorkin makes a quick cameo for the fan with a keen eye, a Facebook aficionado will love the nostalgia of the old-school interfaces from the site’s early days, and the dorky fun of the drunk livejournaling/coding adventure that kicks off the story sets the tone for the delight of watching really smart people play dirty.

The whole thing is as perfect as it could be for a film with such high expectations attached to it. With The Social Network, Fincher and Sorkin have together created the film that defines right now and how we got here.