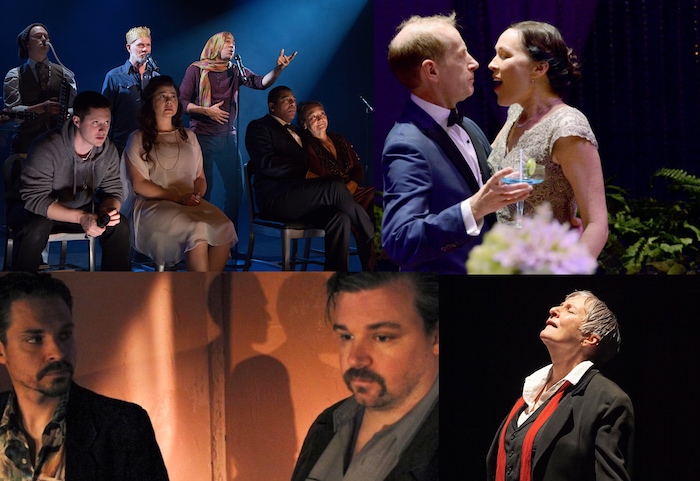 On Stage in TO: Til Death Do You Part

Death and marriage are all the rage on Toronto stages at the moment with four current productions totally preoccupied with one or both.

The most prominent is Groundling Theatre Company’s Lear, the young company’s best-to-date by miles. The press release for director Graham Abbey‘s well-focused production claimed that the company was presenting “Lear with a female lead”, which is true but a female Lear is pretty commonplace these days (it was done boringly in High Park mere months ago). What’s not commonplace is Seana McKenna as Lear. That’s why you do female Lear- not because the politics are good press or because it magically makes the text new somehow- you do it because McKenna has authority in her countenance which pretty much anyone would fain call master, and there’s literally no other actor in the country right now who has as much of it. She’s a commanding queen, thundering divinely and grieving humanly, fearing constantly the encroaching threat of madness. The rest of the cast is a well-balanced and well-deployed assembly with only one misfire among them (I acknowledge the commercial savviness of casting Colin Mochrie as the fool and can even appreciate the theory that an improviser might bring insightful sincerity and instinct to the famously tricky role but you wouldn’t hand Bach to an untrained pianist and ask him to play with Glenn Gould so I find it difficult to blame Mochrie alone for the awkward and superficial performance he gives).Diana Donnelly and, especially, Deborah Hay (the best I’ve ever seen her) are excellent as the elder daughters, thoughtfully turning a duo into truly distinct individuals. Augusto Bitter plays Oswald as exactly what Kent (Kevin Hanchard) claims he is- “a base, proud, shallow, beggarly, three-suited, hundred-pound, filthy, worsted-stocking knave”, etc etc-, an inspired choice that elevates both characters (there’s something intriguing in the idea that Kent is not just showing off his insult skills but his remarkable on-sight insight as well). Winter’s Tale/Measure for Measure alum George Meanwell reappears as a musician and utility player like the common thread that ties the Groundling Shakespearean Universe together. Peter Hartwell’s anachronistic costume design is delicious (so many powerhouse women in powerhouse boots) while his bare-bones utilitarian set gives the players plenty of places to play and plenty of world to affect. It’s a solid production of a terribly hard play, a simple but clear-eyed staging that hides behind nothing- not casting, not interpretation, not budget.

Then, oh boy, there’s Tarragon’s Hamlet (or ““, which might be your first clue right there- this is not a Hamlet by people who like Hamlet). Director Richard Rose is hiding his production behind, well, everything. Big, distracting Choices are on display at every turn of this over-thought/under-thought interpretation. Put aside for a moment the overwhelming concept that it’s all a rock concert (or at least I think that’s what it was) and you’re still dealing with dumb overreaches like Horatio as a priest and Laertes as an, I don’t know, struggling tour musician maybe? (Brandon McGibbon is great on guitar but he’s the most woefully miscast Laertes I’ve ever seen). Rachel Cairns and Jesse LaVercombe are a memorable and fun Rosencrantz and Guildenstern that I’d love to see transplanted to any other production. So too Nigel Shawn Williams’ dull but completely acceptable Claudius and Tiffany Ayalik’s lovely and understatedly defiant Ophelia (though more sophisticated direction of her mad scene is a must). There’s very little in the way of complex textual reading in this production and pretty much no small personal moments for the audience to hold onto, but Jason Hand really brings it with the lighting design so at least there’s that. Almost every line is filtered through a handheld microphone so everything sounds terrible and inhuman but if there’s some poignance to this it’s certainly not clear (there are too many mics available for them to symbolize power and they’re used too consistently to be a commentary on public vs. private selves- what am I missing?!). “To be or not to be” is blessedly mic-free but you get the impression that choice was less thematically deliberate and more of a “let’s give’em this one at least” concession to the purists (to be clear, you do not have to be a purist to resent those damn microphones). I do want it on the record that Noah Reid is a fine Hamlet, even a good Hamlet. The naturalism that makes his contemporary work so incredibly special helps him out here as well, even when the intricacies of the verse knock him around a bit. Hamlet is usually about Hamlet- it comes down to him and, if he’s good, everything will be okay- but that’s not the case here and it makes me sad to think of anyone saying “Reid’s Hamlet was so bad that rows of people left at intermission”. This Hamlet is obnoxious and uninsightful and seemingly uninterested in mining the text for the everything that’s in there but it’s important to distinguish that Noah Reid’s Hamlet is fine, it’s Richard Rose’s Hamlet that’s a mess.

On the contemporary side of town, the thing to see is (no surprise here) Unit 102 Actors Co.’s production of Sam Shepard’s The Late Henry Moss, a tense domestic western about mortality and memory on stage at The Assembly Theatre until January 20th. The most consistent company in town returns to the modern American canon that is their bread and butter and does so with an A-team of company players in place: co-founder Scott Walker at the helm, stalwarts Anthony Ulc and Mark Paci onstage, award winners Adam Belanger and Steve Vargo doing set and lights, even stage manager Marvin Araneta is a seven-show Unit 102 veteran. Those ingredients all work together with ease in a company that knows exactly what it does and how to do it. Elder brother Earl is Paci’s best role in ages, calling on both the threatening intensity and remarkable sympathy he conjures so uniquely well. Matthew Gouveia and Michael Eisner shine in show-stealing supporting roles that bring key humour and Jennifer McEwen makes an impression as a confounding woman no one seems to remember realistically (if there’s a complaint to be made about the production, it’s regarding her strange dance interludes with Ulc’s whiskey-soaked patriarch that ought to help cover awkward transitions and instead just lengthen them). But the thing to write home about is David Lafontaine, Unit 102’s co-artistic director who hasn’t appeared onstage once in the three years I’ve been covering the company (instead he worked on three straight Outstanding Production nominees as a director). It’s somehow both unsurprising and kind of mindblowing how good he is as Ray, the prodigal skeptical mercurial son attempting to piece together the story of his father’s recent death. Outfitted in costume designer Janelle Joy Hince’s joyfully specific selections (pants a bit too fitted, shoes a bit too fancy, shirt far too loud), Lafontaine’s Ray is the sort of theatrical creation that feels too fully formed to understand in just a couple hours, as though you could know him for years and still not be quite sure what makes him tick. Lafontaine and Paci impressively navigate the tricky waters of brotherly chemistry divided by acres of scar tissue and their connection is the unmissable foundation on which a strong production is built out of a play that’s not without its problematic landmines.

The lone new work on this list (well, comparably “new”, this is a remount of last year’s world premiere), Crow’s/Talk is Free’s Wedding Party is also one of very few comedies on stage in Toronto right now (you can also catch the remount of Kat Sandler‘s Mustard at Tarragon). Written by Kristen Thomson but collectively created with many of the actors who appear in this iteration, The Wedding Party is a semi-immersive farce that succeeds mostly on the level of pure spectacle as the six performers fly off and on and around the stage playing a huge variety of characters of different genders, ages, accents and even species. Moya O’Connell is particularly compelling as a young stepmother who defaults touchingly to kindness at all costs and the groom’s female best friend who’s a “part of the family” but still not the bride. No one is the bride, the bride never shows up (nor does the groom); this is a play of supporting characters making it all about themselves. A few moments of tenderness elevate the proceedings but, for the most part, it’s just a wacky romp executed by a strong ensemble of actors who are just totally game. Trish Lindström steals many a scene as an out-of-place young man named Tiger, and new castmember Jane Spidell goes all-in in the lynchpin role of the mother of the bride, but no one can top Tom Rooney who is the consensus reason to go see this show, delivering three bananas supporting turns on top of the dual-leading-man role of identical twins that he executes without reducing either of them by a single dimension. It’s quite the feat but, at this point in his truly singular career on the Canadian stage, you’d have to have been paying very little attention to greet this news with any response other than “well, yeah, it’s Tom Rooney”. The Wedding Party is a little too long to support its own weight and a little too silly to particularly strike my fancy but, on a level of just sheer theatrical execution, it’s certainly a sight to see.