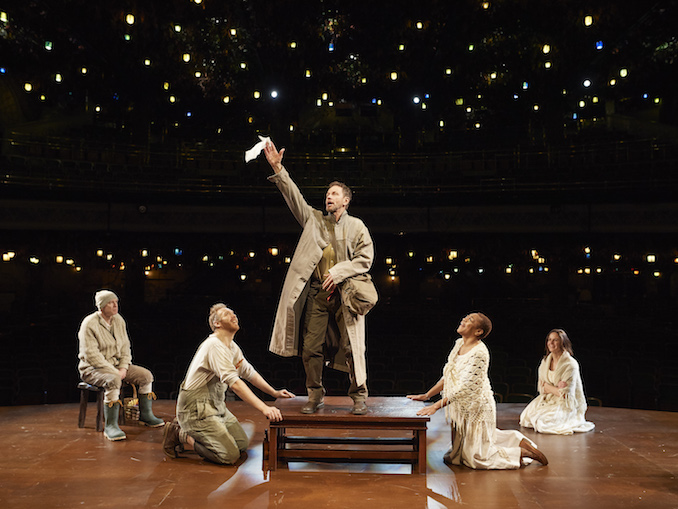 On Stage in TO: Winter Shakespeare

The Winter’s Tale (Groundling Theatre Company)
I’ve talked about this production before, focusing mainly on the problems that overwhelm the action of the first and last acts of this strangely dichotomous play. Sicilia is grey, over-dramatic, over-acted and full of unnecessary melisma but what I discovered upon a return trip (this time set against the lantern-lit Winter Garden Theatre in all its viewed-from-the-stage splendour) is that Sicilia may be as miserable as always but I could live in this Bohemia forever. As a performer, Graham Abbey shines particularly brightly in three categories: joy, charm and, most distinctly, love. He was one of the great lovers in Stratford’s history; still is, though he’s aged out of most Romeo roles. His skillset as a director is exactly the same: joy, charm, and love. These are things not called for in the parts of The Winter’s Tale that don’t work but they are top of the list for those scenes in the middle that elevate this production from dreary to delightful. As Florizel and Perdita, Charlie Gallant and Sarena Parmar make a uniquely convincing pair of young lovers. His unaffected charm (the Shaw actors all outplay the Stratford ones in my eyes, read into that what you will) and her grounded grace get much of the credit for their elevation of underwritten roles but it’s the direction of their relationship that really sells it. Abbey has them in almost constant physical contact, intertwined with carefully detailed physicality that makes their young love feel lived-in and natural. The effectiveness of Abbey’s direction extends across all of the play’s most beautiful moments, those of open heartedness and affection- how Perdita touches her mother’s hair in disbelief when she’s returned to her, the cathartic maternal embrace, Steven Sutcliffe as the Old Shepherd tenderly kissing his adopted daughter’s head as she’s returned to her true parents, the surprising sweetness with which the incandescent Brent Carver plays the thief Autolycus. The joyful and warm Bohemia is home to Mark Crawford’s heartliftingly hilarious Clown and ruled over by Patrick Galligan‘s pitch-perfect Polixenes, a performance marked with pride and nobility but easily seduced by joy and prone to tenderness (though the lack of resolution to his act four freakout is extra frustrating when his inner life is otherwise so well developed). More on this in a moment but my second look at The Winter’s Tale convinced me that Groundling (and Graham Abbey in particular) needs to be doing comedy…

Measure for Measure (Groundling Theatre Company)
… which is frustrating because what the company seems to think is their greatest strength is actually, in my estimation, their greatest weakness. Read articles and interviews or just listen to the buzz in line to get into one of the sold-out performances and the biggest thing you’ll hear about Groundling is this: “we never get to see such grand actors up close in the city!”. There’s this idea that Groundling is doing “real” Shakespeare, “serious” Shakespeare; the big Stratford names headlining the shows (Tom McCamus! Lucy Peacock! Michelle Giroux!) add gravitas, but holy moly does all that prestigious buzz weigh the company down. This production of Measure for Measure is like trudging through very important sludge as very skillful actors deliver big speeches beautifully and too loudly with dead eyes and seemingly no interest in bringing new life to an old role beyond “look, the duke is a woman!”. Measure for Measure is a heavy, alienating play dotted with truly dumb attempts at subplot levity but it’s not unsalvageable. There is exactly one scene of this production with any sort of theatrical energy- Claudio’s desperate pleading to Isabella played by season MVP Charlie Gallant, speaking the speech with the knowledge that it’s just words yet playing the moments as if said words might really change his fate. Simply applying Tom McCamus to a text does not make a play worth producing. Especially a troubling text like Measure for Measure requires investment, stakes and urgency; it simply cannot feel as if this is all old hat to the experts on stage. Yet that’s what Groundling has offered up in its dramatic pieces to date. It’s all heavy, practiced dramatics with no vibrancy to speak of. It’s all so competent that there are very cracks but whatever comedy has been able to eek through has brought much-needed light.

Twelfth Night (Shakespeare Bash’d)
Last time I wrote about Groundling, I put them into specific contrast with Toronto indie stalwarts Shakespeare Bash’d, a company that also prioritizes casting and text work over interpretation but has a much better understanding that humanity is more important than perfection. Twelfth Night isn’t their best- it’s a little slapdash and their insular acting pool is starting to feel strained- but there’s great liveliness to this production’s indie spirit and infectious joy at the task of playing around with some Shakespeare. The highlight here is Lesley Robertson’s knowing Feste, a jokester troubadour with a charming musical sidekick (Franziska Beeler who wrote and performs all the songs live) and a lesson or two to teach Groundling about gender-bent casting that’s good for more than an attention-grabbing line in the press release. Shawn Ahmed‘s Orsino is awfully dashing and I was very intrigued by the thread of servant mistreatment extending subtly to his household as Nate Bitton‘s Valentine gets shut down and Jade Douris’ disguised Viola carries that dismissive tone with her to a strangely loaded first encounter with Julia Nish-Lapidus’ Maria. Not much is made of the history and frustration between Orsino and Hallie Seline’s frivolous Olivia and the subplot trio who perpetrate pretty nasty crimes against Jesse Griffiths’ fantastically proud Malvolio are a bit too silly to endure proper consequences, resulting in a Twelfth Night that leaves a lot of consequence on the table and opts instead to mostly just have fun. But playing at the same time as all that Groundling gravitas, fun was exactly what Bash’d’s Twelfth Night needed to be.