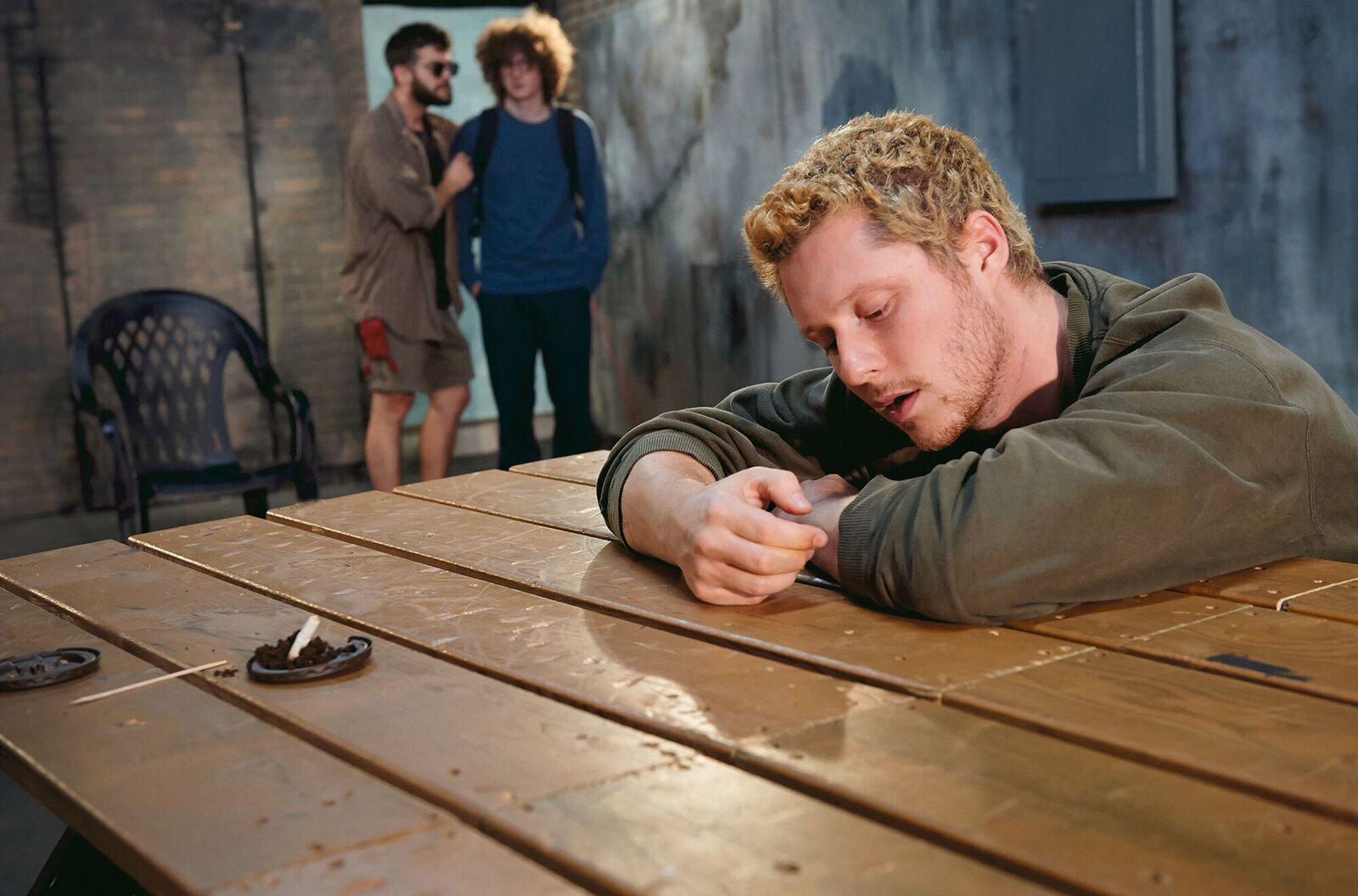 Annie Baker’s Aliens at the Coal Mine

Annie Baker is one of America’s greatest living playwrights, a master of naturalistic contemporary storytelling rife with mysterious spirituality and painfully honest but sugarless emotion. You should run to the Coal Mine just for the privilege of seeing her work, let alone seeing her work thoughtfully presented by a fantastic trio of performers.

Director Mitchell Cushman elicits complex performances from the perfectly-cast actors and keeps his staging simple and intimate (though the blackout transitions could certainly be tighter). With the Coal Mine’s stage reversed, Anahita Dehbonehie‘s brick and cement design smartly incorporates the stage management booth, turning Kate Sandeson into a coffee-sipping neighbour whose peaceful life we witness in glimpses, impervious to the struggle of the young men outside her window. Nick Blais’ lighting oscillates effectively between harsh and romantic with transitions sometimes too subtle to even notice and sometimes sudden and abrasive as though mirroring the play’s challenging emotional shifts. Nothing much happens in The Aliens– certainly nothing really happens on stage- but it’s an unmissable portrait of people not doing much.

Get your tickets HERE and only read the second half of this piece after you’ve already seen the play.

Before intermission, it’s hard to say what The Aliens is actually about. Because there isn’t much of a plot, the audience is led to believe we’re just playing the observance game, spending a little time in the company of some remarkable creatures who haven’t been dealt a great hand. It’s only after intermission and a revelation it’s impossible not to disclose when speaking in any depth about the play’s resonance that Baker’s larger rumination becomes clear. What is at first a classic three-hander becomes a two-hander as we first are told that Jasper is “sick” then learn the truth that he died of an overdose in the time between the first and second acts (a week, while Evan was away at music camp). It’s in this revelation, KJ’s difficulty disclosing it and Evan’s handling of the information, that the brilliance of Baker’s construction and Cushman’s production comes into heartbreaking focus.

As played by Reid (thrillingly and chameleonically against type), Jasper is very much the leading man, the enigmatic sun around which his quirky sidekicks revolve. He’s soulful and poetic- he quotes Bukowski, he mopes about the girl who broke his heart, he reads an excerpt from his novel so well written it makes you sob to think of it going unfinished- but he’s also guarded and resentful, dryly monologuing about how he’s “white trash” and seeming never more than a wrong word away from posing a threat to himself or others (Haynes brilliantly helps to define this quality with a performance that artfully mixes terror with admiration). Reid gives a quiet performance, remarkably still but hyper-focused as though his brain is moving too fast for his body to adapt. Baker subtly weaves in details like Jasper monitoring KJ’s drinking and Cushman emphasizes the two men’s connection as though Jasper knows KJ so well he can anticipate his next move. Jasper’s the star of the show and the last time we see him we don’t know it’s the last time we’ll see him. His spit on the concrete still hasn’t dried, his cigarette butts are barely cold, but he’s not coming back no matter how many times you look towards the door thinking you hear him coming.

Intermission ends and The Aliens becomes a story about supporting characters without a protagonist. It’s as compelling a contemplation of death as I’ve ever seen, a wake up call to the harsh, unannounced senselessness of it. Traditional dramatic form trains the audience to expect certain things in act two because of the dynamics established in act one. By setting up Jasper as the hero then pulling him away, Baker insightfully swipes the feet out from under the audience, leaving us as shocked and uncertain as KJ and Evan. Haynes and Greenblatt are stunning in their scenes of grief, the former feeling everything with heartfelt teenage intensity as he contemplates losing someone he’d only just started to know and the latter rendered nearly catatonic at the loss of the only person who seemed to really know him at all. There’s a nearly impossible balance to the execution of it, calling for show-carrying gravitas from the actors playing the quirkiest roles and a star turn from someone who spends half the play backstage waiting for curtain call. It shouldn’t really work but the pitch-perfect casting of Coal Mine’s production makes it happen.