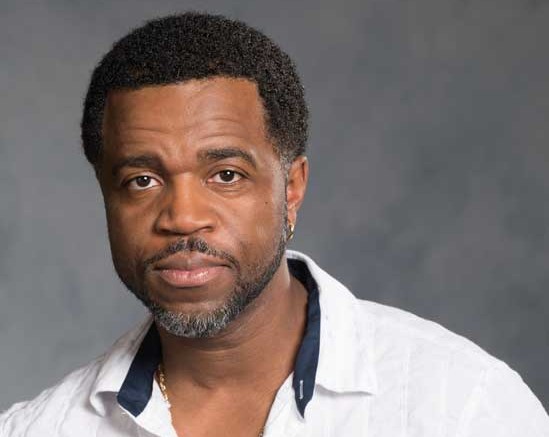 A Toronto stage alum, Kevin Hanchard has been busy the last few years making his name in film and television. Now with a huge hit TV show under his belt (and heading into season three- keep your eyes glued for the return of Orphan Black on April 18th!), Kevin made a triumphant return to the stage in 2014 starring as Martin Luther King Jr. in the Obsidian/Shaw Festival co-production of Katori Hall’s gorgeous imagining of Dr. King’s last night on earth, The Mountaintop.

I remember seeing you in Dream in High Park back in the day, and in Stratford, but it seems to be in the contemporary work that you’ve really started to soar. Do you have a real preference between contemporary and classical?
No, to be completely honest with you. I mean they both present different challenges and different ways of getting to the finish line. I enjoy surprising people with doing Shakespeare and doing Shaw and doing more classical work and at the same time showing others, not that there isn’t a gritty or dirty side to classical work, but you know there’s a little more modern flair in the contemporary stuff as well. It’s like choosing which of your kids you love the best. There’s wonderful unique traits about each of them that you learn to appreciate and enjoy.

You’ve been doing a lot of film and TV work lately, but returned to the Shaw Studio Theatre for a second Philip Akin-directed show (after Top Dog/Underdog) The Mountaintop, which is what your My Theatre Award nomination is for. What was it about that play that lured you back to the theatre?
Jeez, what can I say about it? I’m playing Martin Luther King Jr. first and foremost, that’s really what it boiled down to. And it’s a play that, although it is not perfect, it’s still wonderfully well written, and it’s such an actor’s vehicle, an actor’s piece that it’s hard to resist the allure of that, the temptation of that. Plus working Philip and going back to the Shaw festival which I love. I love that place, you know. It proved to be too much to resist, to be completely honest. Although film and TV has treated me quite well lately, theatre is always sort of where I made my bones, and I don’t think I’ll ever leave it behind.

Tell us a bit about working with Philip. What were some of the key conversations you had around your version of Martin Luther King Jr.?
Well, it’s interesting. Philip and I, we worked together so often, we sort of have a shorthand at this point and that’s comforting and at times it’s a little daunting because you know, he calls me out on stuff. He knows habits I have, both good and bad and he knows when I’m taking the easier route and forces me to take the road less travelled, often. And there’s obviously more of a payoff when you do that. So it’s great that way. And when we talked about this play, Philip had some really interesting insights because it’s a play about a man written by a woman, and the character Camae is based on the playwright’s mother. So it was definitely a very female centric sort of piece. Not that this was a negative thing at all, I think in many instances, when people don’t like the play it’s because of how irreverent it is and Martin Luther King did have a tendency to be portrayed in a negative light as sort of a womanizer and that sort of that thing. Philip and I we really talked about how to advocate for who this man really is, and to not to shy away from his faults but to also not shy away from his virtues. So we wanted to portray a full and whole portrait of who this man really was.

Because he is such a legendary figure and we don’t know that much about who he was behind the scenes. How much of what you were doing was sort of based on imitating a legend and how much was interpretation like you would do for a fictional character?
That’s always a fine line that we have to tread- how do you keep away from doing a caricature and doing an impersonation of the man. It’s a trap you can easily fall into because the public record is so vast and there’s so much information; we all have that picture and that sound in our ears of what Dr. King sounded like. So you take all of that, you can’t deny it, but at the end of the day, if you want to do the play justice, if you want to do the character justice, you have to sort of get rid of all that. You have to just go with what’s on the page and what’s in your heart and just fight for what that character’s fighting for and fight for the bigger things, the macro things that Dr. King was fighting for and still get down to the micro that is the text, and from that springs a character that is different from what Dr. King was in the public eye. That hopefully gives us an insight into who he was behind closed doors. And we never really will know- only those closest to him know or did know, those who’ve moved on to the other side. But hopefully this gives us a glimpse inside to the hardships and the joys Dr. King experienced on a private basis.

How do you feel The Mountaintop fits into that legend and the many artistic expressions of it?
I think that’s a hard thing because it’s art, so plays can be way off base. Who knows, right? But that’s, I think, what the play sets up to do is to just force people to think about it and force people to have their own opinion in the gambit of who this man was and what his work accomplished and what it’s still accomplishing today. And if you look at that whole spectrum and sort of where it sits along that scale and whether it serves to prop him up or whether it serves to bring him down or whether it serves to humanize- I certainly have my own opinions but that’s what the audience has to determine, I think, more than anything else.

Do you have a favourite moment in the production?
I love the moments when the play sort of turns on a dime. Because those moments are the most difficult but, if done correctly, become the most fun as an actor because you have to find a way to turn a tickle fight into an emotional breakdown. It happens so quickly but you have to ground it in something so deep and so moving. Part of the joy of the work is found in the wonderful revelation. But I think it is moments like where they’re there and you think they’re flirting but then it turns into a bitter argument or they’re play fighting on the bed and it leads to, a fissure, a little emotional fissure that leads to a total emotional outburst or breakdown, which is fun to play as an actor. Technically, you know these moments are coming up, and just trying to maintain that through line and integrity of the moment you’re playing not telegraphing what’s next is challenging but I quite enjoy that journey.

Being a part of a Shaw Festival/Obsidian Theatre Company co-production, you had the rare opportunity to do two different runs in two different places. How did the two runs compare and did the play change at all?
It’s always interesting to do work at the Shaw Festival, especially contemporary work and work that’s quite new to the Shaw Festival subscriber base. You never know what you’re going to get. When we did Top Dog/Underdog a few years ago, that’s way out of the realm of what they’re used to doing at the Shaw. But it was so wonderfully well-received that it gave us the confidence to go in and do The Mountaintop without any apology. Not that there was any apology when we did Top Dog, but to go in there and do the show and say, ‘you know, let this land however it lands’. And the response was remarkable. Even the fact that the Shaw Festival subscriber base, a lot of it are older people, we had a lot of people who had lived through this era and made a point to stay behind and were talking to us about the fact that this is what their lives were back in the 60s or ‘my father marched with Dr. King’, or ‘I did this, or I did that, this is my how I related to the struggle’. And that was so deeply moving and so profound to know that we were striking a chord that resonated with certain people. That meant we were really doing something right.

In Toronto, it’s always hard to cross into Toronto, but nonetheless, we had quite a strong turnout, especially in the last week, and once again, we’re bringing the story to some people who don’t quite know Dr. King as personally as some of the Shaw Festival subscribers. So it switches over to more history lesson. So it’s a different dynamic and you can sort of feel the change of the dynamic between the Shaw Festival and Toronto. But you know, it’s just being received a little differently but the fact that you can hear a pin drop means that, regardless of how they’re receiving it, they’re receiving it and that’s what’s really most important.

I have to ask you about Orphan Black. Is there anything you can tell us about what’s coming up for Art this season or anything you want to say about the show in general?
Under punishment of death, I can’t tell you anything about it. We premiere in a couple weeks, and they’ve taken the show and they’ve gone in a totally different direction. Not totally different direction, I shouldn’t say that, it’s just going to be extremely surprising the things that are happening this season. They’re, no holds barred this time around. And there’s some interesting things for Art as well. I really hate that I can’t say anything because I’m trying my best not to get sued [laughs]. So my answer is very, very vague, but Art has some really interesting moments, and we see a little bit of a different side to him which is exciting for me as an actor. I don’t think people will be disappointed. I think there’s going to be a lot of sort of wide eyeballs and people going ‘oh no they didn’t’. Yeah, they did. And they will. And it keeps getting bigger and better. So I’m looking forward to it and I hope people enjoy it.

What else are you up to now? What’s next?
I’ve been busy. While in the process of shooting Orphan Black, I’ve been working on a TV series called The Expanse for the Syfy network, based on the series of novels by James S. A. Corey. I have a wonderful little character arc on that as well as well as working on a TV series called Rogue so things have been quite busy. But it’s better to be busy than not, you know.

And is there anything else you’d like to add?
No, I’m just really, really honoured to be nominated. And especially with the guys in the category, there’s no slouches there, so to have my name involved in that is humbling, to say the least. I wish everybody all the best and I just want to thank you guys so much for the honour.