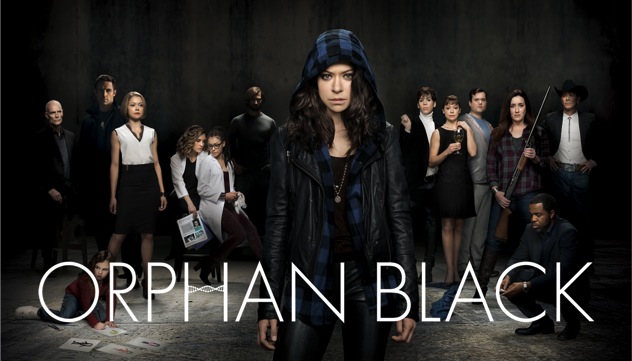 I came late to the bandwagon when it comes to Orphan Black. It took a long summer and a persistent roommate to get me to finally dive into a series that my cooler (and Canadian) friends had been begging me to watch for years.

Here’s the basic premise, although if you haven’t seen the show yet I don’t suggest learning too much about the plot. The series started off with Sarah Manning, who witnesses a suicide-by train by a woman who looks exactly like her. This sets off a chain of events that leads to her taking over the woman’s life, discovering a vast reservoir of other women who look like her, and fighting like hell to try and make a safer life for herself, her semi-estranged daughter, and the women who share her face.

So what to say about a show that all your cool friends are already watching? It’s both better and worse than what you’ve heard.

First, let’s get to the worse. As our very own Borah said in her review of the first season, the sci-fi show’s twisty nature is sometimes belied by in-episode twists that are so predictable they border on the comic. This particular fault is less prevalent in the second season. But the second season also occasionally falls down the sci-fi rabbit hole, getting lost in its own mythology.

But in its second season, Orphan Black also proves to have more going for it than just its truly, can-not-be-overstated-ly amazing lead performer (more on her later, because duh). Answers, the guiding force for all the clones who populate Orphan Black, are notoriously tricky creatures in the world of science fiction. Rarely can explanations live up to the build up that writers and shows give to them (a lesson I keep trying to remind myself of in terms of Game of Thrones). So a show like Orphan Black really needs to ground all its mythological twists and turns in character truths that continue to feel compelling.

And Orphan Black has those character truths in spades. Take the late-in-the-second-season episode “Things Which Have Never Yet Been Done.”Here is an episode in which all of Clones are pushed to the edge, and their relationship with each other becomes front and center. This leads directly into the season finale “By Means Which Have Never Yet Been Tried.”Here is an episode that, while delivering a heaping buttload of exposition, maintains its laser focus on the women who populate its world. It takes time out of revelations and twists to give us a five minute dance sequence that is both a technical majesty and a beautiful piece of character work.

Which brings me, of course, to the piece of Orphan Black that just literally can not be praised enough. I knew pretty much nothing about the premise when I started the show —all I had heard focused on its lead, Tatiana Maslany, and how astonishing she is in every role on the show. And let’s just get this out there: this show doesn’t work without her. It also doesn’t work AS WELL without the amazing technical work that makes the Clones able to interact with one another in a way that is authentic and meaningful, but none of that movie magic is worth anything without Maslany breathing life into each woman. Sarah is not Allison is not Cosima is not Helena (is not Rachel). As any fan of the show will tell you, there are moments when it is easy to forget that one woman plays all these characters – episodes where you find yourself thinking CRAZY thoughts like “I wonder if the actress who plays Alison was sick this week?”

Not only does each character feel fully fledged and alive, but they each have their own unique chemistry with the other characters, affect on the screen, and ability to cause mayhem. Take an otherwise disappointing episode in which the showrunners decided to REALLY show off Maslany’s skills by having her slip into the skin of a transgendered clone, Tony. Mostly, this is a seriously underdeveloped excuse to have Maslany wear a beard. But the completely different chemistry she displays with Jordan Gavaris’ Felix (himself a series MVP) is the best encapsulation of just what makes Maslany so damn effective. Although it’s an icky development, Maslany and Gavaris sell the hell out of it.

The show has a few missteps: the aforementioned trans-clone; the flighty nature of Paul Dierden (Dylan Bruce) who just never seems to be compelling. But its ultimately strong storytelling manages to move past this.

Most of the second season finale is the stuff Orphan Black dreams are made of. There’s ample Helena time, including an adorably perfect introduction to both Cosima and Allison. The aforementioned clone dance party. Mrs. S just continuing to kick enigmatic ass. Kira finally annoying me less.

I’m less enthusiastic about the episode ending twist, although I will withhold judgment until I get to see the next season. (HERE BE MAJOR SPOILERS) The revelation that Project Lida was one half of a cloning experiment that also included Project Castor, the boy clone project, could prove fruitful. Or it could prove a dead end. Part of this is based on my fear that Ari Millen isn’t up to the task of portraying multiple characters with the same depth that Maslany brings to it. Part of this is based on how much I loved the female-centric nature of Orphan Black. And part of this is just my being afraid that adding more mythology to the show means less time for the show to devote to shots of Helena and Sarah lying side by side while Helena farts*.

That being said, the team behind Orphan Black have done a great job thus far at dealing with their themes, plot and characters in a way that feels satisfying. And while it seems impossible that an actress as beautiful and talented as Maslany will have too many more seasons of pulling quintuple duty on a television show, I’ll take as much of it as I can get.

* This was actually a VERY sweet moment in context.

*   I had nowhere in this review to mention Kevin Hanchard’s Detective Art Bell, but he really comes into his own comedically in the second season. I would watch a full series that’s just Art and Helena as odd couple roommates.

*   And a shout-out to poor beleaguered Donnie, who’s storyline is probably the most tragic. It’s not easy to be a clone’s one true love, just ask Delphine who manages to screw everything up, even when she’s really trying to help. It’s a message that Cal should definitely take to heart.

*   I like Michael Mando’s Vic 1,000X more when he’s playing the goofy thorn in Allison and Sarah’s side rather than when he was supposed to be Sarah’s bad boy ex. The idea that Sarah Manning, even an earlier, more-screwed up Sarah Manning, ever found Vic attractive is just…unfathomable. I mean, have you seen Cal and Paul?

*   Although I like any storyline that gets me more Helena, I would definitely prefer this be the last time she gets kidnapped by unclear assailants.