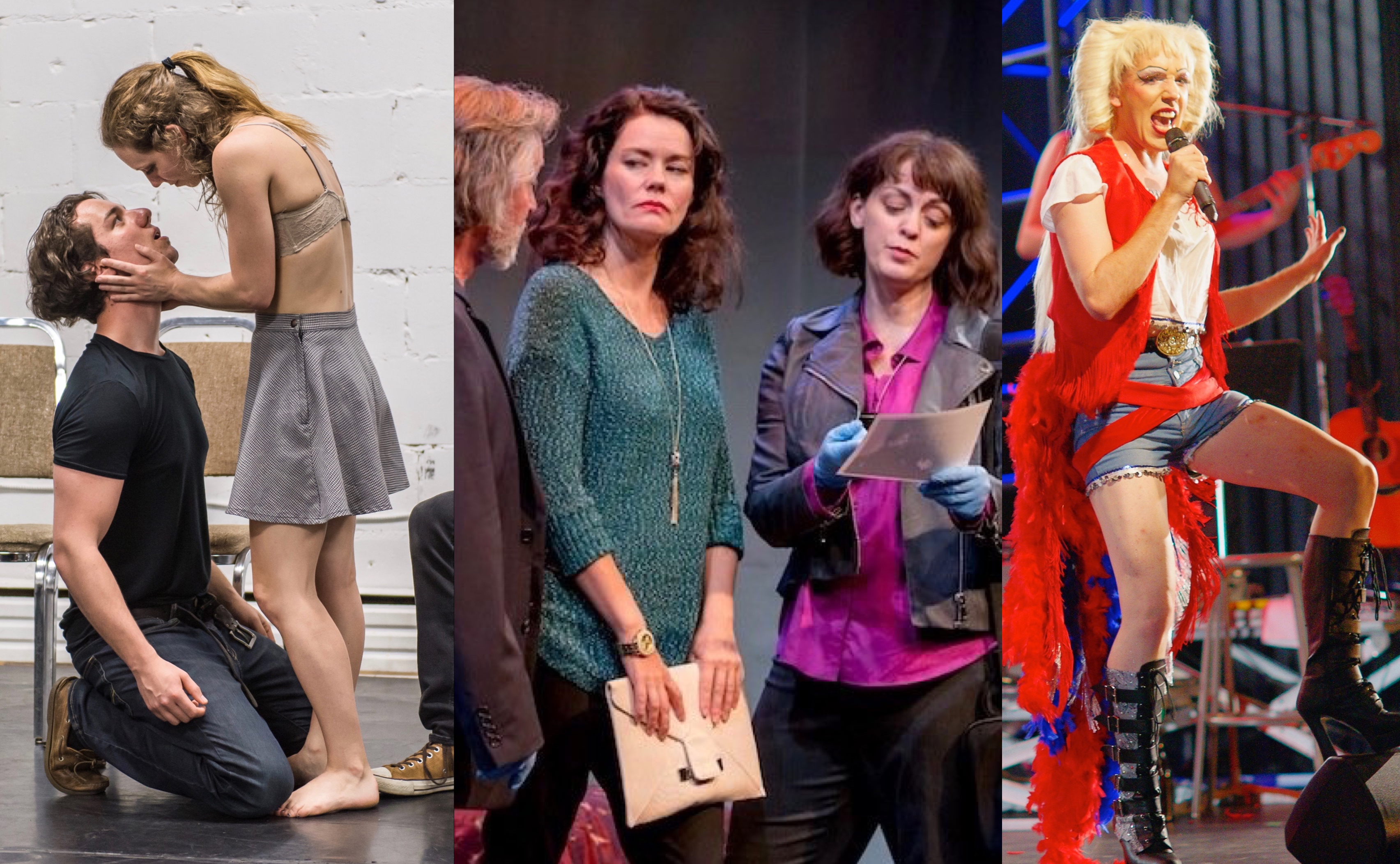 On Stage in TO: Identify Yourself

The saga of Hart House musicals is full of high highs and low lows as their success fluctuates wildly depending mostly, it seems, on the popularity of their chosen show. They don’t pay their performers so, in order to lure the right talent, they have to offer up dream roles. Complex classics like Cabaret and Into the Woods inspired enough enthusiasm to fill every role with a triple (or at least double) threat up to the task. Carrie the Musical, not so much. The latter also had serious direction problems but, at the end of the day, the right star carries the day pretty much every time. Rebecca Ballarin’s direction of Hedwig and the Angry Inch is importantly swift and sensitive but it’s James King in the title role who makes Hedwig the first unmissable Hart House show in years. In short shorts, tall boots and an overwhelming wig, King is completely unrecognizable from his previous turns on the Hart House stage, trading in his sweet musical theatre tenor for a powerhouse punk rock sound and masking his usual Canadian accent with a very convincing German lilt. His Hedwig is an enchanting presence as she guides the audience through a one-act roller-coaster that’s half interactive rock concert and half confessional solo show (it’s not really solo since Lauren Mayer is on hand as sidekick/husband Yitzhak with deadpan dialogue and killer high notes but Hedwig would have the audience believe that she’s the only star in the room). Balancing toxic delusions of grandeur and divatastic cruelty atop an immovable foundation of wounded vulnerability, King plays Hedwig as both a would-be/should-be icon and just a person looking for a little contentment. The audience falls hard for her as she dryly mocks the theatre’s lobby and straddles unsuspecting onlookers but fatal insecurity is never far from the surface even in her most bombastic moments. Set self-awarely and anachronistically in the here and now (this is Hart House Theatre, 2017 and there are smart script changes to prove it), this Hedwig and its Hedwig are urgent, impressive, and unforgettable.

Originally produced in 2013 by the playwright’s own company safeword theatre, this dark one-act about sex, identity, and power is identifiable as an early work for Brandon Crone, showing sparks of the crisp dialogue and compellingly muddy morality that mark his more sophisticated pieces but mired in strained plot mechanics and iffy character motivations. The script is strong enough to allow the right cast to sail rather easily over these issues but the too-young troupe assembled by PirateLife & emerGENce Theatre struggles, helped along not at all by clunky direction and inelegant transitions (though Jack Rennie’s brutal fight direction definitely hits the mark). The performances in general are too broad for Crone’s brutally honest style with the least subtle performances unfortunately coming in the scenes that set the tone off the top. Karen Scobie and Bryce Fletch eventually settle in nicely with thoughtful emotional work but only Steven Vlahos really makes much of an impact in a role that feels like it ought to be supporting but here quickly takes over absolutely everything. Though he looks about 10 years too young to have done half the things the character of Roy claims to have done (or to pose half the threat), Vlahos brings a refreshing ease to the production that none of the other actors possess. His voice work is impeccable and Roy’s bombast and top-dog energy sit so comfortably on him that he has room to play the compelling emotion simmering underneath the showier stuff. It’s a great performance- one I’d certainly like to see him return to at a later stage in his career- but the rest of the production is left completely in Vlahos’ dust.

What Rebecca Northan and her company Spontaneous Theatre are doing in the genre of improv theatre is totally unique. Like Blind Date before it, the detective story currently on stage at the Tarragon selects an audience member to become the show’s protagonist for one performance only. Though the performance is completely improvised by the entire cast, what said audience member is being thrown into has significantly more structure than what you’re likely to see at a more traditional improv show. The cast comes prepared with their characters, backstories and motivations; the scenes play out in a (mostly) pre-dictated order and, though the ending may change, the facts of the case for the most part remain the same. The charming honesty and spontaneous humour provided by the unprepared non-performer thrust into the spotlight is what makes the format so different. On opening night the audience was packed with incredible actors and magnetic personalities but the cast went out of their way to pick a non-performer to join the show, favouring the shy authenticity of a public health masters student over someone more likely to mug or riff or act. All Northan asks of the audience member she brings onstage is that they be themselves and from there the enjoyable mercuriality of the production emerges; it’s not about which cast member can make the most hilarious off-the-cuff joke, it’s about how one person’s individuality can shape the world around them.

That said, the trouble with Undercover is that, by it’s very nature, it’s much less personal than Blind Date, and thus the power of the audience-member-as-protagonist conceit loses a lot of its impact. Without the emotion of self-revelation and trusting vulnerability that made the audience participation in Blind Date so remarkable, Undercover feels more like a choose-your-own-adventure without enough options. The pre-planned elements of the play would need to be significantly more intricate (and the stage management and run crew next to godly) for the mystery to actually make sense following the actions of a truly unpredictable guest star- ten different explanations for every piece of evidence, a backup plan for any clue that might be missed. On opening night the show hit a standstill when our hero-du-jour failed to piece together a twist that’s essential to trigger the play’s endgame. Eventually some impatient audience member just shouted out the answer but, for a moment there, I was incredibly intrigued by the possibility that he may never figure it out, that the course of the play might be seriously altered at this particular performance because this particular guest star didn’t have great observational skills. But Undercover doesn’t, at least not yet, have the contingency plans in place to really follow the character-illuminating whims of its star and still have the clues fall into place in a satisfying way. The unique Spontaneous Theatre conceit is full of endless possibilities for character-based storytelling but detective stories are a plot game and, as much as there’s some fun to seeing an amateur squirm, plot games only really make sense when everyone knows what they’re doing.