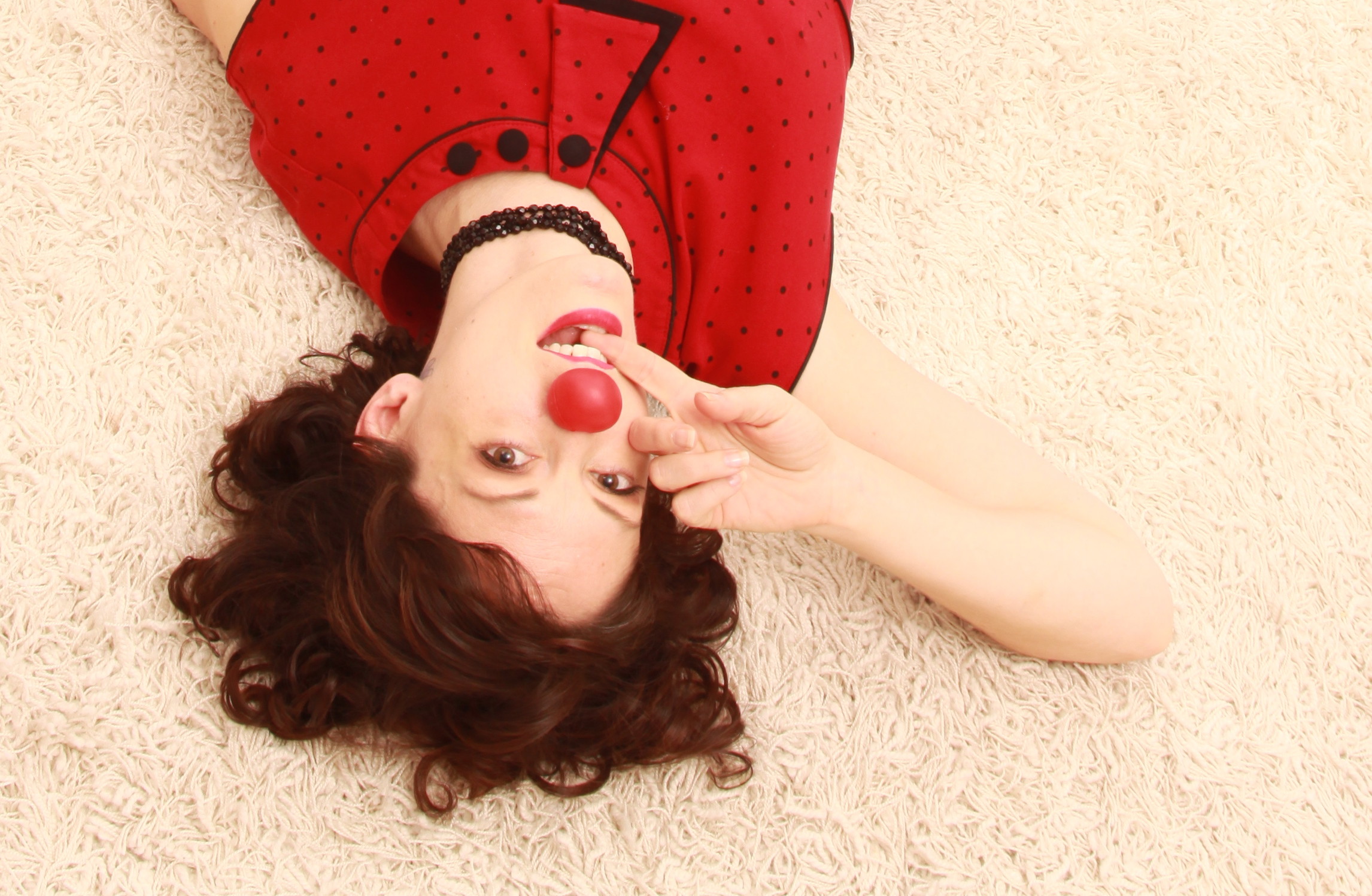 Strictly speaking, Rebecca Northan‘s hilarious and affecting clown show Blind Date (which played at Tarragon this fall) is not really a “solo performance” as there are always at least two people on stage. But since we can’t possibly give award nominations to the dozens of unsuspecting audience members who were chosen to “date” Rebecca’s Mimi during the run of this improvised two-hander, we’ve decided we absolutely have to give kudos to the only actual actor on stage (apart from the occasional waiter cameo, of course).

We caught up with Rebecca for the low-down on Mimi and her many conquests.

Catch us up on what you’ve been up to since your interview for the 2014 Nominee Interview Series.
What have I been up to? Hm. Directing and producing touring productions of Blind Date with a number of other very talented ladies in the lead clown role, and developing a NEW Spontaneous Theatre show called Legend Has It, which invites an audience member to go on a Fantasy Adventure with goblins, orcs, wizards and Mumplings. We ran the show for 5 weeks at Alberta Theatre Projects in Calgary, and just got back from doing it at the Brooklyn Academy of Music in New York.

How did you get into improv and clown?
I started improvising when I was 16 years old at the Loose Moose Theatre in Calgary. Little did I know at that age that Keith Johnstone was an International Improv guru. I was very lucky to have ended up in his theatre company. Clown, I fell into by accident, in a way. Tina Rasmussen asked me to create a 10 minute piece for the Spiegeltent as part of World Stage in 2007…I figured doing a sexy-clown piece would be fun….The rest is history! (well, after the fact I figured I ought to take a class, so I did Baby Clown with John Turner of Mump and Smoot, which was FANSTASTIC and really helpful!)

Who are some of the artists who’ve always inspired you?
John Turner and Mike Kennard from the moment I saw my very first Mump and Smoot show. Karen Hines, of course. Pamela Brook was my acting teacher at University and inspired in me a GREAT LOVE of Shakespeare. Ted Dykstra and Richard Greenblatt, and my dear pal, Kate Hennig. Actually, I could go on and on…there’s so much talent in this country. I’d be remiss if I left Damien Atkins off this list – he makes me giggle and think deep, poetic thoughts!

Do you remember the funniest improv scene you’ve ever been a part of?
I don’t. The school of improv that I come from does not set “being funny” as its’ target. I was taught to tell stories first and trust that comedy will show up, especially when there’s Truth and vulnerability being shared and people are allowing themselves to be changed. I can remember a handful of improv scenes in which the narrative pieces fell into place so perfectly that no one in the audience would believe it wasn’t scripted – that’s what gets me high, and keeps me coming back.

What’s the biggest disaster that’s ever befallen an improv scene you were in?
Improv is a disaster when the work is self-indulgent and tells no story. That’s really heartbreaking to me. When you know you’ve wasted everyone’s time, and know you can’t give the audience their 15 minutes back. There are times that my ego and fear push me into making stupid/clever choices that kill the narrative. I’m not proud of myself when I do that. Improv is a practice…I have yet to perfect it. The GOOD thing about fucking up is that it’s the quickest way to get better. So. Failing forward……

How did your clown character Mimi develop? How is she similar and different from you as Rebecca?
Mimi just showed up, fully formed. I suppose she’s the best, most patient, sexy, saucy, misbehaving, understanding parts of myself. Rebecca is far less generous than Mimi.

The concept for Blind Date requires putting a lot of faith in an audience member picked after only a brief conversation in the lobby. How do you go about making your choice?
We mingle in the lobby before the show. We’ve done around 450 performances of Blind Date now. People ‘POP’ when you scan the room, we talk to those people and see if they’re game. We never choose someone who doesn’t want to play on some level. We never pick anyone that we know. We’re looking for the person that, if you met them at a party, you’d want to hang out with them for the evening.

What qualities do you try to steer clear of?
Overly eager – it’s not normal to WANT to be picked to get up on stage in front of a crowd. We respect the shy.

Has the format of the show changed much over the multiple runs?
Not really. We’ve embellished a few scenes in order to find different ways of activating the ‘Date’. We want to see how this person deals with authority, or being left alone, or having the make a moral decision. That’s really interesting territory to me.

Your “dates” over multiple runs of the show have been from all kinds of demographics. Have you noticed any patterns or reached any sociological conclusions?
Hmmm….In general, playing with British guys has been the biggest challenge. They play their cards VERY close to their chest. They’re not keen to delve into what they do for a living, or how they ended up in their current job – they see it as a probe into their “class”. That was a real learning curve when we took the show to London.

Have any of your dates ever thrown you such a curveball that you weren’t sure what to do next?
No. Whatever they do is “right”. We adapt around them. When anything truly extreme has happened, the only thing to do is to breathe, and then do the next most obvious thing. A Date in St. Paul got a hold of a gun and shot a cop on the way back to Mimi’s apartment (he was doing this to avoid intimacy)… Mimi was so exhilarated by the escape from the scene of the crime that she demanded he fuck her on the carpet! We ended the show on Death Row. That will NEVER happen again in a million years.

What have been some of the greatest moments or revelations that you’ve had on stage with your dates?
When a Date is brave enough to be honest and vulnerable….you can feel the whole audience fall in love with them. It’s the single greatest feeling I’ve ever experienced in the theatre. One fellow went from being embarrassed to reveal what he does for a living, to calling himself a Utilities Super Hero by the end of the show. He sent a card saying we’d changed his entire perspective on his work.

How many of the men stay in touch? Do you have any particularly interesting follow-up stories?
We probably stay in touch with about 5% of our former Dates. I get Facebook messages, cards, videos, baby pictures, wedding pictures – it’s a real honour. One of my favourite stories was learning from a Date that prior to doing the show he had been suffering long-term from social anxiety. After doing Blind Date, he was so amazed at himself for having done the show, he went jogging outside for the first time in EIGHT YEARS! That made me weep.

What are you doing now/ what’s your next project?
My fantasy-adventure, Legend Has It, is going to Magnetic North in June. Fingers crossed we get some bookings out of that! I’m also working with a small group of artists developing a show with the Stratford Festival called An Undiscovered Shakespeare. We’re going into our third workshop on that and it’s very inspiring and terrifying!

Do you have anything you’d like to add?
It’s so wonderful to be nominated for “Solo performance”….but, what I do really isn’t ‘solo’ at all. Blind Date wouldn’t work without all the amazing men who’ve stepped up on stage with us. I owe them a HUGE debt of gratitude! And – to my crew, who saves my ass on a regular basis! There’s no such thing as a one-person show.