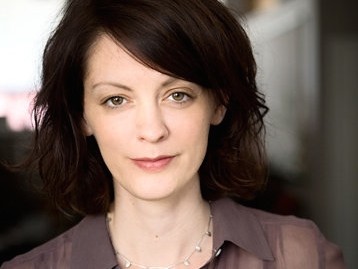 Rebecca drops by the interview series to talk about her experiences as part of this Best Ensemble-nominated cast and report an attempted murder that may or may not have happened when Panych threw all those big names in one room.

Can you remember your first experience with theatre?
My brother and I used to put on shows for our parents in the living room. We would drape a quilt over a bench to create a backstage. We specialized in comedic sketches, commercial and song parodies, and puppet shows. My brother and I still perform together now, whenever we get the chance.

Where did you develop as an actor?
I studied theatre at the University of Calgary, but the biggest influence in my career was becoming part of the Loose Moose Theatre Company at the age of 16 and studying with improv guru Keith Johnstone. Being a good improviser makes me a better actor.

Do you have any dream projects?
Dream projects….anything involving my close friends. Comedy, drama, musical…doesn’t matter. Though, I do have some pretty big musical theatre fantasies.

What’s your favourite production you’ve ever worked on?
I was lucky enough to have a theatre produce a play I wrote called Kung Fu Panties. It was an female driven, kung fu action adventure on stage. I have never worked so hard, laughed so uproariously, or been in better shape!

How did you get involved with Sextet?
Morris [Panych] invited me to be part of Sextet. I had previously been in two other of Morris’s plays, directed by other people. I was so excited to be part of a new play of his, I said YES YES YES without having read it.

What are some of the rewards and challenges of working with a director who is also the playwright?
There were no challenges in working with Morris as director and playwright. I suppose one of the fears might be that it’s your job as an actor to really poke sticks at a new script, and you might worry about offending the writer. Morris wasn’t precious about anything. He really trusted us, encouraged us to be rigorous, and ran a rehearsal hall that was full of hard work and laughter. We couldn’t have asked for a better environment!

As a world premiere, did the play change much in the rehearsal room?
Sextet change a LOT during rehearsal. It was amazing to watch Morris really [hone] in on his ideas. He cut 25 pages from the original script – which is amazing!

What was the most important conversation you had with your director in developing your character?
There was no single important question. All the discussion was essential. Characters are developed in layers. You think you know something, then another question arrises. Morris also gave us permission to make lots of our own choices. He’s an excellent guide.

You played a classical violinist. Is that a world you’re at all familiar with?
Nope. I know nothing about classical music, or violin. I played flute in my junior high band

Tell us about working with the rest of your nominated all-star ensemble.
The rest of the all-star cast….Total jerks. We fought like cats and dogs…and I won’t say who was involved, but one day there was almost a murder….I was lucky to escape with my life. (and I absolutely ADORE each and every one of them)

Do you have a favourite moment in the production?
I really enjoyed the Harry/ Dirk scenes with Matt [Edison] and Damien [Atkins]. They made me giggle a lot.

What are you doing now/ what’s your next project?
I am currently writing a solo show for myself called “Troublemaker”. I am also booking my other show, Blind Date, for summer touring around Ontario. I am always available for gigs!