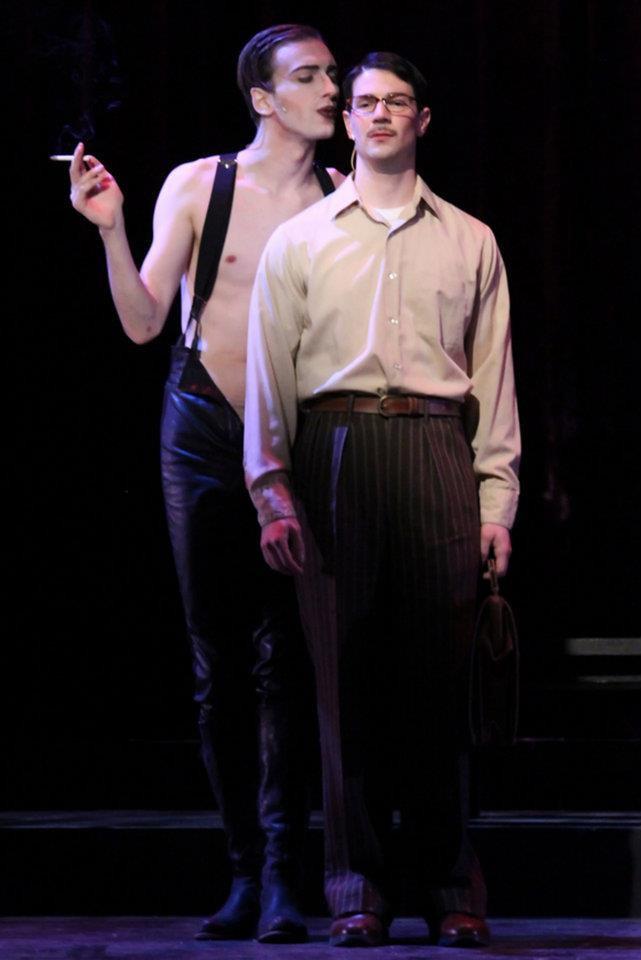 What Good is Sitting Alone In Your Room?

Kander and Ebb’s Cabaret is a fundamentally flawed piece of theatre; it’s absurdly constructed, tonally conflicted and full of disjointed and ill-conceived numbers. Then Adam Brazier got hold of it. The charming tenor-turned savvy director took on none of the musical’s high-profile baggage when he began preparing to stage the problematic piece at Hart House Theatre. Leaving Liza in a corner, Brazier studied the text itself and staged it the way he saw it, collaborating with a talented cast, designer Brandon Kleiman, musical director Scott Christian and choreographer Amanda Nagy to tell the story of Cabaret in a more visceral way than I’ve ever seen before.

Set in Berlin against the start of the second world war, there’s a pervading hopelessness to the story of Sally Bowles and Clifford Bradshaw’s whirlwind love affair that an odd number of productions seem to gloss right over, celebrating the exuberance of free-wheeling nightclub antics rather than exploring the gut-wrenching complexity of human failing inherent in the truly tricky characters. At the talkback after last Saturday’s show, actor Glen Mills talked about playing the role of young Nazi Ernst Ludwig with as much compassion for the character as possible; Brazier added “you can’t play ‘villain'”, an attitude that lifts the whole production to far more remarkable heights of complexity than I expected. Just as Ernst isn’t wholly vilified, Courtney Lamanna’s Sally Bowles is as tortured as she is ebullient, as pushy as she is charming. The whole world of this Cabaret is grey territory.

Cabaret always has a creeping sense of darkness to it; you know, because there’s Nazis and abortion and stuff. But as the chorus takes on the “Tomorrow Belongs to Me” reprise after Ernst’s hateful outburst at the end of act one and Sally belts the titular showstopper in act two, most productions display characters who are blissfully and exuberantly moving along despite their dark world; “going like Elsie”, if you will. But Brazier’s production makes the aforementioned reprise a cruel mockery instead of a politically safe serenade- his cabaret is dingier, his Emcee omnipresently sinister, his chorus beaten and battered (kudos to the always superb Trason Fernandes and his makeup team for the progressively worsening bruises). I was looking forward to the title song, sure that Lamanna’s strong pipes could carry off the demanding tune, but her version has none of the showoff glitz I was expecting. Instead, she offers a feeble and desperate cry for the world to be as idyllic as the cabaret she describes; sickened, saddened and emotionally defeated, Lamanna’s Sally pushes her way through a Fosse-inspired routine and the wailing final vocals, leaving the audience disappointed and heartbroken and desperately wanting to reach out and sweep her far away from that cabaret stage. It’s a remarkable effect from a song that has very little standalone substance. The crux of Brazier’s production lies in the performance of that song- it’s not sexy or vocally impressive, it’s mostly sad and a little angering- the whole thing is riskily and unpleasantly superior to the “look at me, aren’t I daring!” incarnations that have come before.

The trust and humility it takes to deliver a show-off song with the grittily depressing realism that Lamanna brings is unbelievably commendable. I was far from sold on the production as the cast wobbled through “Wilkommen” and “So What?” at the top of the show, but with her entrance in “Don’t Tell Mama”, Lamanna quickly brings the production to life. She’s dynamic and heartbreaking throughout, entrancing when she wants to be, likewise angering and pitiful at times. I never like Sally Bowles, but Courtney Lamanna’s performance is so daringly real that she managed to change my mind.

As for the rest of the cast, I was disappointed in Don Berns and Renee Stein as Herr Schultz and Fraulein Schneider; their sweet and sad subplot gets far too easily overshadowed in a production that demands vulnerability from its actors (and the veterans are the only performers who don’t seem to quite grasp their assigned accents). Keenan Viau is a fine Cliff; he also is easily overshadowed but it feels far more purposeful when it’s Sally doing the shadowing. Lauren Toffan is an excellently defiant Faulein Kost and Michael Harvey stands out in a capable chorus as a particularly engrossing and richly drawn background player.

Which brings me to the text’s standout character- the Emcee (an iconic role who’s been played by everyone from Joel Grey to Alan Cumming, Michael C Hall and Neil Patrick Harris). The always-brazen, oft-offputing, generally sinister wackjob who hosts the titular cabaret is made an omnipresence in Brazier’s production; he doubles as every minor role- if someone is in need of a prop, he brings it to them, whether he’s in the scene or not. The effect is a strengthening of the Emcee’s narrative voice. He is not only the host of the cabaret, he’s the host of Cabaret, and it’s he who will decide exactly what we see and how we see it. Clad in high, stompy boots, leather pants (open at the crotch, naturally), matching suspenders and not much else, the preternaturally tall, thin and pale Michael-David Blostein looks hardly like a person at all- he’s more of a presence, a symbol towering above the action he has uncomfortable amounts of control over. Unfortunately, Kander’s melodies give Blostein hardly any chance to break out his shocking operatic bass (a single phrase at the end of “Tomorrow Belongs to Me” is all we get in the entire first act), but he fares surprisingly well in the higher register, speak-singing where necessary and delving a little deeper for a particularly haunting rendition of “I Don’t Care Much”. As he conducts the depressing dance of Cabaret, Blostein’s movement is somehow simultaneously fluid and marked by sharp angles; I literally jumped when he glided past me down the dark aisle for the finale of act one. The Emcee is the performance of Blostein’s career thus far on the merits of impeccable casting alone (the off-kilter authority that is Blostein’s bread and butter was exactly what Brazier needed for his dark interpretation) but I’m quite convinced it won’t take him long to top it.

With the help of a hugely talented cast and creative team, Adam Brazier has made Cabaret into more than what it is. By stripping the piece down to its essential self (plus “Two Ladies” which, though unnecessary, distracting and dumb, somehow made the cut), Brazier stages the story of the complexly flawed human beings beneath all the shiny sequins of Cabaret‘s tradition.