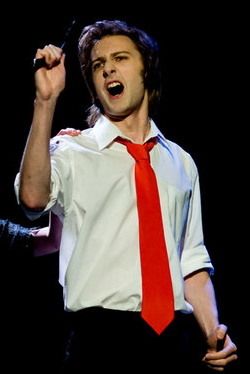 Before we announce the winners of the 2010 My Theatre Awards, we’re proud to present the My Theatre Nominee Interview Series.
.
Toronto actor Michael-David Blostein is one of My Theatre’s favourite young performers. His pitch-perfect portrayal of Sweeney Todd in Love is A Poverty You Can Sell this summer at the Toronto Fringe Festival won him a My Theatre Award nomination for Best Actor in an independent production.
.
Read on for our full interview with Michael-David

Oh sure. It was some kind of live Sesame St. production at the Hummingbird Centre. I had to leave because I was being disruptive. A day in the life.

When did you first start singing? Where did you train?

Well, I started training when I was about 12. It was classical repertoire. Through some inexplicable miracle, my voice never broke… to quote Neil Gaiman, it “sauntered vaguely downwards” until I found myself quite capable of doing James Earl Jones impressions.

What performers have always inspired you? Are they the same today?

A few years ago I’d have said Trent Reznor. Back in the mid ‘90s, it seemed like he desperately needed to prove something to each and every audience he faced. Now I’m more interested in the kind of stuff I’m not sure I’d like to emulate all the time… Tatsuya Nakadai’s performance in Harakiri springs to mind.

Would you consider yourself primarily a singer or an actor?

There’s no question for me – I’m a singer first and foremost. When I started my training, I didn’t have any illusions of becoming a “great singer” or developing a style. When it comes to my singing, all Dave Gahan-esque flourishes are sitting on a solid foundation of technique. With acting, I’ve had to play catch-up for what could have been years of movement classes/vocal exercises/general technique… you name it. With acting, I have to try about 20 different things before something “clicks”. With singing it’s more like “EUUGH, I slept 3 hours and drank 6 pints last night, let me sing you something in Russian”.

What musical and theatrical styles interest you the most?

I find that dance can often move me emotionally to a place when I’m a bit uncomfortable. Marie Chouinard is a good example.

There are basic characteristics I always seem to find in the music I like. A) If there’s any remotely dissonant piano, I forget how to use my legs. B) If there’s any creative use of electronics, whether we’re talking electroacoustic manipulation or a good old synth, my legs will continue to atrophy. C) If the project in question is fronted by an ageing beauty that rejected the temptations of a celebrity lifestyle in favour of an intellectual, hermetic existence made meaningful by the creation of music with dissonant piano and electronics, then… we’d agree that I just described David Sylvian’s Manafon pretty well.

How did you get involved in Love is a Poverty You Can Sell?

Justin Haigh from Soup Can Theatre wrote “Dueling Productions”, which was a review of the two versions of Assassins that were playing concurrently last February. After printing some very kind and very quotable things about my performance, he and Sarah Thorpe got in contact with me to do an audition. The guy who had played Sweeney Todd in their winter run hadn’t been able to come back for the summer remount, so by a great stroke of luck I ended up singing “My Friends” and “A Little Priest” with Dayna Chernoff (another new addition).

You played a the murderous barber, in the cabaret. What’s the weirdest role you’ve ever played or the oddest production?

I’ve spent a sizable chunk of my life so far as a disgruntled art student, so Sweeney Todd’s characterization came pretty quickly. “My Friends”, especially, is that romantic scenario of an artist being reacquainted with his abandoned tools.

The oddest production so far would have been Red Light District’s version of The Witch of Edmonton. This was something put on for Summerworks, and Ted [Witzel] and Catherine [Dunn] used the whole of Trinity Bellwoods Park as the setting for the play. We met with the audience at the south gate, improvising in character – as the play went on, we led them to different sections of the park which stood in for locations in the play. After having a jaunty (that’s right) morris dance on the stage in the dog park, we had ourselves a good old fashioned witch burning at the north end of the park.

Love is a Poverty You Can Sell was selected for “Best of the Fringe”, has the success of the show had a positive impact on your career?

Well, let’s put it this way – getting into Best of the Fringe was the first time I ever even considered a career with this stuff was possible for me!

What has been your favourite role to date?

So far, I’d say my favourites have been John Wilkes Booth and Sweeney Todd. I got to look dangerous and swing around heavy weapons for both roles. Sweeney Todd was interesting – it’s the only character I’ve ever had where I could exploit the fact that I can go wall-eyed at will. Did you catch that? Right at “… and we’ll do [wall eyes!] WONDERS….won’t we?” I thought it was a nice touch.

Booth, I think, is where I had the most success. Having a historical figure to portray makes the process of characterization feel much more natural – I could find bits and pieces of the man’s life with which I could semi-relate. He really reminds me of Yukio Mishima – at one point, Mishima was almost universally lauded as Japan’s greatest writer (much like Booth was considered one of America’s best actors). Both Mishima and Booth were charismatic men – however, they both had political dogmas so far to the right that even a lot of right wingers wouldn’t touch them. Ultimately, they both ended their lives in theatrical acts of violence that disgusted people more than inspired them.

Well now that I’ve developed a typecast of sometimes-charming, mostly murderous sociopaths, I’d love to do a full production of Sweeney Todd. I find I’m the most comfortable with roles that require a lot of stillness… collectedness, I just say, which is funny because in real life I never sit still or shut up. I like playing serious older guys who stand in one place and deliver soul-crushing monologues about the gaping void.

On that note, I’d like to play the Marquis de Sade in Marat/Sade.

The one role I’d really really like to play at some point is Creon from Anouilh’s Antigone. I’m probably not old enough for that one. People would probably laugh upon hearing a 23 year old delivering a line like “We are all wounded to death”.

Which directors and actors have had a major influence on you throughout your career so far?

Well, I think I should probably make some space for the famous actors and directors first, because up until recently, they were the only real contact I had with this stuff. Back to the whole stillness thing, I’d say Tatsuya Nakadai’s performance in Harakiri blew me away – all the power was in his voice and his posture, and with that alone he was the most magnetic character on screen. Kobayashi (the director) is also amazing… I don’t know if I could think of a famous director who really influenced me directly.

In terms of actors I’ve worked with, Matt Duncan (Sam Byck from Assassins) was insane. I’ve never seen anybody control an audience like that. Kat Letwin is great. Watching her effortlessly improvise in between scenes (Witch of Edmonton) was inspiring. Ted Witzel was also important for me in that he pushed me a bit to get out of a very insular kind of acting and move around on stage. Hope it worked!

You have a very distinct voice and presence. Do you find that it helps or hinders you when auditioning?

That’s an interesting question. When it comes to a vocal audition, I usually just pick a piece that shows off my range in some way. The presence you mention is still a new thing for me – as an actor, I think my general technique is still in its infancy. For the first while, I was more relieved than proud when I found something that works.

My “career” as I think of it started in Assassins – so of course, I think of my body of work thus far as orbiting around the moment I blow my brains out as Booth.

I’m in The Threepenny Opera with UC Follies right now. PLUG INCOMING: Feb 3 to 12. SEE IT! The music is ever so angular.

I`d really like to thank you from the bottom of my heart for your support thus far. I think I’m still a relative newcomer to this whole theater thing, and I find it very reassuring to have been given the attention from your blog, and the chance to be interviewed.