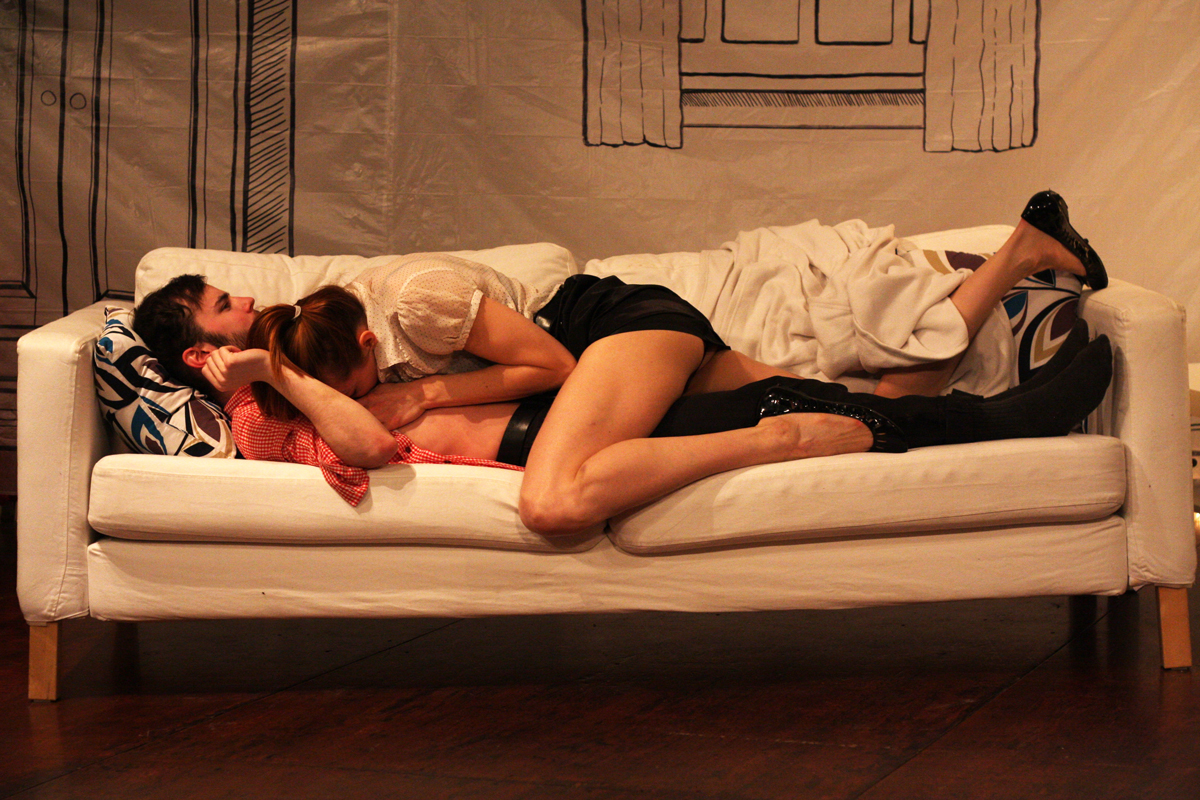 Brave the Weather and Don’t Forget Your Turtleneck

Warning.  Both this show and this review are heavily experiential.

I was just thinking the other day how much I miss those long gone days of university productions that were staged professionally, but with the much-needed energy and liveliness that fresh and ambitious minds can bring to live theatre.  I’ve been a bit bored lately, to be honest, seeing productions that don’t really engage me or teach me anything.  I mean if I have to trudge through the cold and snow to sit in an uncomfortable chair for 90 minutes, I hope to at least be surprised by something, or else I would stay cozy at home and watch TV, or learn something on Wikipedia.

As my guest and I approach 14 Markham Street, a place I have never visited, I am thinking to myself that A) It is dark, freezing, and we are late, and B) I don’t see any building that looks even remotely like it could contain a performance space.  And then out from the fire escape of what looks like the back of an apartment building – as if sensing our presence – comes director and playwright of Turtleneck Brandon Crone to greet me with reassurance that we are in due time, warmly inviting us in, suggesting we wipe off our feet, warning us of the drafts we will experience and graciously begging us to make ourselves at home.  After being introduced to the new work and amiably thanked for our support of indie theatre by Crone, the track lighting – yes that’s right, no stage lights – are dimmed as we are plunged into the world of Brian (Alex Dault) watching porn on his sofa. The atmosphere makes us feel as if we are really in his “space” at one with him. His sister Darcy (Leah Holder) storms in and a battles ensues in which she proclaims her superiority as a professional in contrast to her loser brother who is lazy and useless in her view.  For much of the rest of the show the audience is half-lit, appropriately, in this intimate space that allows us to further appreciate the craziness of the characters played by fearless actors and the unrestricted reactions of fellow patrons.  The excellent design (Claire Hill) will see long white shower-type curtains cleverly strung across wire in two directions, beautifully displaying the black stencil backdrops that compliment the “clinical” furniture of two additional locations: A) The office of The Pink Cross – dedicated to “recovering” porn industry workers and B) The quaint apartment of Vicki (Kiran Friesen) – apparently recovering herself.

The actors are some of the most outstanding I have seen in a long time.  While confronting complex issues of sexuality, their head-to-toe conviction forces us to question our preconceived notions of what is wrong and what is right when it comes to sex, how we choose to display our bodies, and to whom?  Roy (John Fray), Vicki’s former manager, is a critical force in this regard.  He arrives vengefully to reclaim her as his “property” also expressing how her unique approach is what made her a “real” star and that we are all responsible for the conscious choices we make with our bodies.  One finds it somewhat hard to view him fully as an exploitative asshole, even in the midst of his misogynist aggression, as he threatens to rip off the balls of the male cast members.  Among them is Louis (Jakob Ehman), Brian’s foil: the shy recovering porn addict who battles with learning how to proceed slowly when becoming intimate again with Vicki.  Ehman most admirably captures all sorts of details you can expect of his character, from an ever-so-trembling voice to fidgety hands, while making it seem completely unrehearsed, in the moment.  It’s so well played that you totally sympathize with Vicki when she finally “lets him have it” for being so damn cautious and worried as if she’s going to “eat him up whole” like a “sex-starved animal” (my quotations) if they do more than kiss.  The dynamic between the two is brilliant:  You would expect these two to completely identify with one another, given their relatable past, but it’s not that simple proving how fragile human emotions can be, especially when linked to our physical desires.

Louis works at The Pink Cross with prudish Darcy who has actually set the two up.  They act as rehabilitation spokespeople for those exposed to a life where sex overtook them, despite Darcy seeming to have become involved with the organization coincidentally.  But just at what point can you say that sex has overcome you?  And is it right to deem something as morally wrong even when we can justify it on a personal experiential level?  These are all bothersome questions which I suspect are part of the reason why Crone has said that he has never been able to change the script much, even though he continues to find its issues repulsive.  I suppose it does what theatre does best: give us a glimpse into the world of certain individuals while opening up a discussion on some of the issues they present.  That is what I find justified for me the absence of a more theoretical social or political discourse on sex addiction here.  We are left to our own vices, I suppose, in coming up with personal opinions and, maybe, conducting our own investigations.

This is an experience that I will not forget for a long time to come. Be a sport: forget about the draft – which I actually did not feel at all – and be welcomed into hub14 for a show that will have you laughing, cringing, and (afterwards) talking.  If Turtleneck is not busting at the seams that’s because it’s seamless, in the best way possible.