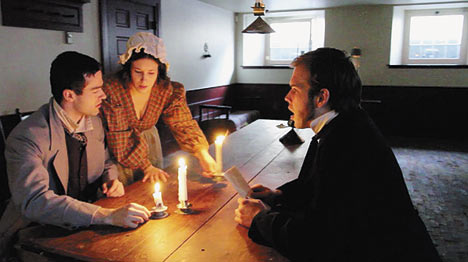 The Single Thread model is a successful one. The concept of experiencing a Toronto landmark under the premise of theatre instead of museum-dull tourism is intriguing to residents and visitors alike. For most Torontonians, The Campbell House Story will be a reminder of “oh yeah, I read about that guy in grade 7” combined with a moment of “so that’s what that brick building is that I pass on my way to Umbra or Cafe Crepe”. Those are not unwelcome revelations, and playwright Alex Dault’s intelligently crafted historical fiction plays out with just enough intrigue and emotion to eliminate the musty remains of Campbell House’s grade school field trip vibe.

Using characters most Canadians have at least heard of as the pillars of the piece, Dault invents s compelling story made of just enough fact to render its historic-landmark setting useful and intriguing as opposed to arbitrary, and just enough fiction to allow said story the benefit of artistic imagination. Brandon Crone plays Will, the leading man based on vague historical account that tells of his existence and not much else. In Dault and director Lee Wilson’s story he is a wayward sort-of-youth of good breeding and bad habit who’s been sneaking stories to reviled tabloid writer William Lyon Mackenzie. (That name sound familiar? Good, someone passed elementary school history- he and his King-surnamed grandson each changed the country in massive ways). Will, the young heir to his grandfather, judge Sir William Campbell, gets caught in the act by the weaselly loyalist Jarvis and a series of misdemeanors and cover-ups play out as evidence in the overarching trial of Will for treason. Carter Hayden’s excellently straight-backed Jarvis leads the prosecution while Leah Holder, as the only altogether invented character in the play, stands in Will’s defense as the all-seeing and mighty wise Irish maid Healy.

Crone is a fine leading man, with charm and full-throttle commitment, though he fares better in smaller doses. Jennie Ryan gets lost a little as Hannah Campbell, the clueless lady of the house, though Thomas Gough brings his usual stately authority to the proceedings as Sir William. Andrew Perun is utterly compelling as a Scottish brogue-d (and epic sideburn-ed) Mackenzie, his sly smile and defensive but proud posture conveying the most complex of polarizing figures even when he’s reduced to some of the script’s silliest moments (which mostly involve him donning a girlish falsetto- it happens twice, unfortunately). The standout amidst a generally very strong cast, however, is Leah Holder, who is not only responsible for the narration of Will’s defense (read: the narration of the play itself), she also creates a character as intriguing as her historical counterparts, holds down the (somewhat under-written but very well-played) love story and leads the audience through the house with an easy charm, unwavering sense of character, flawless Irish accent and strong improv instincts. I’m always impressed by the actor tasked with shepherding the wayward audience through site-specific works, but Holder does it in addition to playing the key role in the story itself- an even more impressive feat.

The Campbell House Story plays at, well, Campbell House (Queen & University) at 7 & 9pm until Saturday, March 17th. Be sure to get there early to enjoy old-timey drinks and read the clever Colonial Advocate-inspired program, then stay after for an informal talkback with the altogether charming cast and crew.