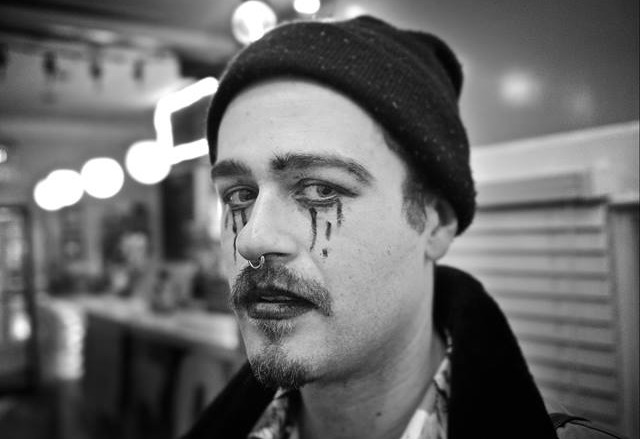 Boundary pushing indie playwright Brandon Crone won the MyTheatre Award for Outstanding New Play back in 2013, the first time he was nominated. Now celebrating his third nomination in a row, he returns to the Nominee Interview Series to answer our most pressing questions about the 2015 play that left us with a thousand things to ask him.

What have you been up to since your interview for the 2014 Nominee Interview Series?
I spent a lovely summer working with the great Norm Foster and was lucky enough to participate in the Stratford Festival 2015 Playwright’s Retreat. I learned a lot from both experiences and met some great people during the process.

This is your third straight year being nominated in this category. How do you maintain such a consistent output?
When I first started writing plays, I sort of pulled a Martin McDonagh and frantically wrote a bunch of plays within the course of a year. Most of the work I’ve produced within the past three years is from that very productive period. I’m also blessed to have a great team of friends and supporters around who keep me motivated and inspired every day, so you can blame them.

You first mentioned Nature of the Beast in your interview two years ago and told us you’d been working on it off and on for years. Walk us through the history of the script.
I started writing it on a typewriter in the summer of 2008. I had to get the ribbon replaced and the clerk at the store was berating my shitty model. He shrugged, looked at me and said, ‘Well, that’s just the nature of the beast.’ I started writing the play as soon as I got home. I wrote a bit of it that year and finished the first draft in 2012. I had a few workshops in the interim, one of them taking me to New York City. Once we starting planning production, I worked on lots of rewrites with our director Luke Brown. I was changing things and rewriting until the bitter end.

What were some of your key inspirations and influences for this story and characters?
My life. I grew up in Stroud, ON and later in Barrie as an adolescent. Being gay there was not very welcoming at the time. I knew someone who got kicked out of his house for being gay like Mike does in the play. I also knew older gay men who had been closeted for years like Francis in the play. I’ve always been extremely sensitive to my emotional surroundings and the hostility around queerness at that time really frightened me while I was growing up. Until I was 19 years old, I was in complete and utter denial of my homosexuality because I had convinced myself that being gay was wrong and amoral. This long, strange period of isolation and self-repression has always had a huge impact on my life as an adult and writing this play was an opportunity for me to come to terms with the past. I wanted to write about being a weird sexual minority in an isolated environment. The actual events of the play are fiction but a lot of the stories in the play are either autobiographical or happened to somebody else I once knew.

How much did the play change from the first to final draft? What were some of the biggest edits you made?
The play was shelved for quite a few years and it wasn’t until I picked it up again during production that it changed significantly. I wanted to take some of the ideas that seemed dated and make them resonate more to an audience in 2015. I also added in more technology to play with the theme of the old meeting the new. The actual sequence of events didn’t budge at all but the way I wrote the ending was dramatically different in style compared to the older versions.

How did you decide that the time was right to finally produce this play you’d had on the backburner for so long?
I was always sort of scared of it, being such a personal and vulnerable play to write. But it was also just sitting there, waiting for me to do something with it. I gained a lot of confidence producing my first two plays Turtleneck and Donors so I thought, why not? Let’s dive into the deep end.

This was your first play that you didn’t direct yourself. Why did you decide to hand it over to Luke Brown to direct?
Luke and I connected over a great show we did at Theatre Aquarius Studio and he was very interested in the play about two years prior. We spoke a lot about it together and during our conversations, I felt as though the subject matter would be too personal for me to look at objectively. Luke was extremely instrumental in helping me develop the script way further than I thought I was ever capable of.

What were some of the biggest ways Luke’s vision diverged from your original ideas?
Luke wanted very much for us to be on the same page. He was very good at facilitating the process, asking all the right questions and providing clarity to things that didn’t make sense or were unnecessary. It was very exciting to come in during tech week and see how everything had come together. I was very proud of our finished product and extremely grateful for Luke’s work. Especially being so patient and accommodating to a manic, sleep-deprived playwright.

Tell us about your cast. Did you struggle finding the right actors for any of the roles?
The auditions happened while I was in Fredericton so I didn’t see anybody until the callbacks. However, Nick [Rice], Jakob [Ehman] and Clint [Butler] stood out very quickly. They were all enthusiastic about the project and fit their roles perfectly.

Jakob Ehman has been in nearly every play you’ve written. What is it about his interpretation of your work that keeps bringing you two together?
I love working with Jakob. I think we understand each other artistically, we respect each other’s work and feed off that creative energy. I particularly like working with him because he doesn’t hold back when performing. I know I can throw him anything and he’ll find a way to make it captivating. I think he’s brilliant.

How involved were you in the rehearsal process?
I poked my head in a number of times and spouted existential nonsense. But for the most part, I spent my time down the hall furiously rewriting and drinking Red Bull.

Did you have a favourite moment in the show?
Well, I created a situation where one straight male actor repeatedly spanked another straight male actor’s bare ass over his lap on stage. I think that kind of trumps everything else, don’t you think?

In case you produce it again, we’ll start this question with a *spoiler alert* but then I have to ask about that ambiguous ending. What happens in that final scene?! Was it always meant to be open for interpretation or did I miss something? Do you have a scenario in your head that you think is what really happened? Was the truth of the matter a subject of debate in rehearsals and production meetings?
Oh god, where do I start? Since the play’s inception, I always knew how it was going to end. The only thing that changed dramatically in my final rewrites was the way in which it was told. I was very inspired by the end of Sarah Kane’s Blasted where she represents the passing of time through these very short scenes or moments. In our production, these moments ended up being accelerated at high speed so I suppose the effect of them may have seemed a bit bewildering to an audience. But I’ve always seen the ending (the actual events anyway) as rather simple and unambiguous. At the end of the play, Francis (the uncle) and Mike (his underage nephew) just end up fucking each other. And then Mike leaves as if they had been performing a sexual role play the whole time. I wanted to bring the audience deep inside the psychology and deviant eroticism of sadomasochism on an experiential level. And also to identify and expose the amoralities that dwell within the realm of our fantasies. There’s even a moment in the second act when the character of David compares the act of role playing to ‘theatre’. And the last moment of the play when Francis ‘sees’ himself in the iPhone represents a dark herald of the new digital age and a profound moment of self-recognition. Whether it’s a silly farce, a cruel joke, a dream play or just straight up, incestuous, gay porn, I say interpret as you wish. I think it’s the most honest thing I’ve ever written and to this day, I still don’t feel the need to change it no matter how many people have suggested otherwise. Maybe one day I will but certainly not anytime soon.

It’s not an easy show to process. What were some of the most interesting reactions you got from audience members?
The fact that a lot of people thought a play about tying people up could’ve used more ‘restraint’. I guess the audience was kinkier than I expected.

If you click on the “About” section of the safeword website, you’re listed alongside just two other artists- MyTheatre Emerging Artist Award winner Alex Dault and three-time Outstanding Design nominee Claire Hill– the producer and scenographer for Nature of the Beast, respectively. Tell us a bit about your partners in crime that help make up safeword.
Alex Dault and Claire Hill are two of my best friends. I love them both to death. I think we all found each other because we’re really passionate weirdoes who enjoy pushing the envelope in theatre. Alex is an all-round theatrical wizard and I’m always in awe of his creativity, passion and ideas for what is possible on stage and beyond. And Claire is a mighty force to be reckoned with. Her designs are so beautifully expressive, intuitive and resourceful. safeword is the place where we let our freak flag fly. Working with them is very liberating, inspiring and outrageously fun.

You’re back at the Storefront right now with another new play. Give us the quick pitch.
The play is called Contempt and it’s all about love. After Nature of the Beast ended, I was filled with a lot of self-doubt and I wanted whatever I did next to be carefree, fun and, most important, have a happy ending. The play, at its core, is a love story between a woman and a man in a wheelchair. We’ve got dancing in it, we’ve got sex in it, we’ve got people running around in their underpants wearing Viking helmets. You’re gonna have a great time watching it and I’m very excited to share it with Toronto audiences. [Read our review HERE].

What else are you working on now/next?
We’ve got our third annual Safe Words competition coming this spring. There are play submissions from all across the country this year and I always look forward to reading what the next generation of Canadian dramatists are writing about.

Do you have anything you’d like to add?
Come see CONTEMPT playing at The Storefront Theatre (955 Bloor St. W) until March 6th. You can purchase tickets online by visiting www.thestorefronttheatre.com or www.safeword.ca. Here’s the link for our online trailer as well.