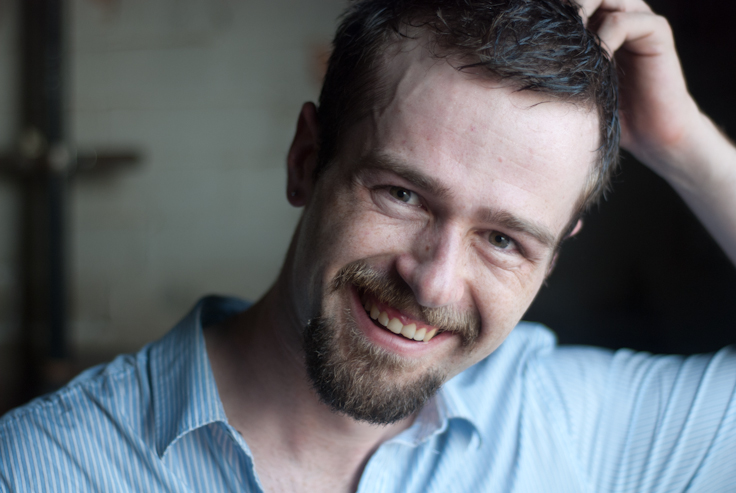 With two impressive productions in 2013, playwright Brandon Crone is making a name for himself as a bold new Toronto voice, his company Safeword serving as a safe haven of sorts where productions can push the boundaries of both social acceptability and expectation. The premiere of his play Donors earned him a nomination for Best New Work in this year’s awards.

Brandon joins our Interview Series to talk about playwriting, Safeword, and how far is too far.

Can you remember your first experience with theatre?
I saw The Nutcracker when I was like five and when the music started playing I leapt to my feet and started conducting the orchestra. The people behind me didn’t think it was cute but after that my mom gave me a handmade conducting baton for my birthday and Tchaikovsky on cassette tape.

What writers have always inspired you?
Harold Pinter is my idol. Without him I would’ve never written anything. Elfriede Jelinek is a close second. After that Caryl Churchill, Sarah Kane, Franz Kafka, Albert Camus, Bertolt Brecht, Samuel Beckett. Anything depressing.

We first encountered you as an actor (with Single Thread Theatre Company) but lately you’ve had quite a bit of success as a writer (including a My Theatre Award nomination for Best New Work). Would you consider yourself primarily a writer or are acting and directing just as important to you?
A lot of people know me as a playwright right now but I’ve worked a lot professionally as an actor mostly in regional theatres outside of Toronto. I’m also a singer, dancer, director, music composer, film editor – I do it all baby! I’d like to be recognized for a lot of different things, especially as an actor which I’m trying to focus on a bit more right now (HIRE ME!), but being a playwright has brought me a lot of joy and fulfillment these past two years so I’m cool with that….but seriously, hire me!

What was the first thing you ever wrote?
A poem called “My Cat That Does My Homework” in Grade 4. I thought it was pretty good.

What do you think is the best thing you’ve ever written?
A play called Nature of the Beast. It’s currently unproduced but has received funding through the TAC and OAC as well as two public readings, one through Canadian Stage’s GYM Emerging Artist Program and one at Urban Stages in New York City. I’m very excited to see it produced in the near future.

Tell us about your nominated play Donors. Where did the idea for that play come from?
There was an event, most likely during Gay Pride, when Church Street was closed off and a bunch of these little booths lined the streets. One of them was about sperm donation, which I thought was interesting, probably cause I thought someone would pay me to do it, so I approached the guy and that’s when I learned that gay men are not usually permitted or are discouraged from donating sperm, or blood for that matter. I thought this would be a great subject to write about but I wasn’t interested in exposing the injustice of the matter. What was more interesting to me was tapping into the fear of why they don’t want gay people to father children and representing that side of the argument with full conviction. And then, as usual, when I started writing it, I swooshed in a shaker full of other titillating themes such as father/son relationships, nature vs. nurture, allusions to fairy tales, and some pretty nasty imagery about man goo to make up the complicated cocktail that is Donors. A play and a production of which I am extremely proud of and honoured to have included in your list of nominees.

Did you go through a lot of drafts? How did the play change through the development process?
Not a lot. I wrote it about two years ago over the course of like a month and it mostly sat on a shelf while I pursued other projects. I looked it over now and again changing a word or two here and there but I only did a few significant rewrites just before rehearsals began. It’s really quite easy to f**k up a play actually. There is an overwhelming, in fact dangerous amount of directions that are possible within any given scene and you can get lost in it very easily if you dwell on it or second-guess yourself too much. For me, usually as the play starts to naturally manifest itself, I assume that’s the way it’s bound to play out and I try not to interfere too much with that life unless it’s total sh*t. This makes a play far more interesting to me when the characters are at the mercy of what they wished they’d said and done in that moment but do not have the benefit of an editor to undo them. I write theatre for the oppressed. But the plays themselves are oppressed. The characters want so desperately to be recognized or represented in a fond or more flattering light but they are never allowed to. They must submit to their circumstances which makes my job a cruel but commiserating one.
`
What sort of research goes into your writing?
Each play requires a different amount of research depending on the topic but they also require a little bit of ignorance too. Obviously I did a lot of research into sperm donation, listened to many stories from donor families and children, read articles, etc. I was also inspired a lot by reading children’s books, especially Edward Gorey. I did what was necessary and let imagination do the rest.

What’s your writing process like? Do you plot and plan or just start at page 1 and work through?
I plot out the entire thing, characters, title, everything before ever setting foot on a page. This is the only way I can ever write anything down because I simply have no compulsion to write aimlessly, to not know where it’s going. Some might interpret this as cowardice but for me it is simply cohesion. This way every line, every phrase relates to the whole. Nothing is arbitrary. I enjoy building plot and structure more than I do language.

Your plays are designed to push the limits. Do you have a personal boundary you will never cross?
Yes. Never tell an audience how to think. In fact the most satisfying reaction is when everyone feels something completely different afterwards. I take immense pleasure in screwing around with people’s morality but at no point do I ever try to prove a particular point. Everything must be subject to uncertainty. Of course there will always be certain opinions that I choose to feature more than others but the character who spoke them should then immediately be kicked in the nut sack in some way or another afterwards.

How do you approach casting your work? Are you ever able to find actors who fit perfectly with what you had in your head while writing? Do you write characters for a specific actor?
I cast impulsively most of time and it usually ranges from a very good friend of mine to someone completely random who I’ve never seen act before. I also hate auditioning people but I’ll do it if necessary. I’d rather take a chance on someone. I don’t write for specific actors nor is there a perfect version of any character. I cast people who I think will bring something cool to the part, namely themselves. It also helps when you have three unbelievably talented actors at your disposal. Jakob Ehman, Thomas Gough and Karen Slater are as good as it gets and they sufficiently rocked my world during the entire run of the show.

Are you very prescriptive in your stage directions or is each play re-imagined a bit in the rehearsal process?
Donors had almost no stage directions. My designer, the brilliant Claire Hill, was given carte blanche to do whatever she wanted with the set. The actors were also given a lot of freedom to do things differently each performance and oh boy, did they! I didn’t intend to but I ended up watching every single performance. I never got tired of it.

John Fray is also nominated this year, as Best Supporting Actor for his performance in your play Turtleneck. Tell us about that production.
John Fray is a sexy beast and a riveting actor. I was extremely fortunate to have him part of our very talented ensemble. Turtleneck was a very exciting show that had this sort of magnetic aura pulsating around it. It was unstoppable. This was our very first show and it ended up being a huge success. I am extremely grateful to everyone who helped make it such an exhilarating experience.

How did your company Safeword come into existence?
After I wrote Turtleneck about two years ago, I was very excited that I finally had an original work to submit to Fringe and Summerworks to hopefully better my chances. But I needed a company name to submit. Company names are hard. The best ones are memorable, intriguing, they have a purpose behind them and don’t have the word ‘theatre’ in them. Safeword did the trick for me so I applied. I lost the New Play Contest Award and didn’t make the lottery for Fringe so I tried SummerWorks and was rejected being told by the jury that the play bordered too much on sensationalism. So I basically stopped applying to SummerWorks and Fringe and I kept the company to produce on my own!

What are you doing now/ what’s your next project?
I have a lot in the works right now. I just got an OAC grant to do an adaptation, I have to finish another play, plan another production and I’m also working on a musical but that won’t be ready for a while yet. But the most imminent project is my super-awesome-fantastical-playwriting-festival-extravaganza!!!! It’s called Safe Words, it’s a national playwriting competition and festival and you’ll be hearing more about it this spring. Go to our website to learn more about it.

Do you have anything you’d like to add?
YES! I am currently Head of Marketing for Single Thread Theatre Company’s sexy indie show called Firebrand and you must all come see it now because I told you too!!! It runs from Feb 6th – 22nd at Mackenzie House (82 Bond St.) and is going to be amazing. Go to SingleThread.ca for more info.