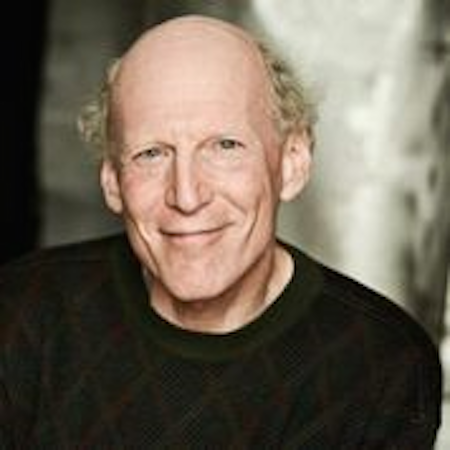 In Brandon Crone‘s Outstanding New Work-nominated play Nature of the Beast, Nicholas Rice played a kindly old man who lives in the woods, doesn’t know how to use an iphone, takes in and cares for his lost teenage nephew… and runs a sex dungeon in his basement.

Once we convinced ourselves not to be scared of him, we talked to the perfectly nice Outstanding Actor nominee about capturing all those things in one performance.

Can you remember your first experience with theatre?
It was 1962, I was in Grade 5 in Winnipeg, and I had just received a 45-rpm record for Chanukah: Chubby Checker’s “Let’s Twist Again”.   I sat at the back of my class one day and barely audibly sang the song. The teacher challenged me: either be quiet, or come to the front of the class and sing for everyone. I couldn’t resist! As I came forward, people hooted and jeered. But it was empowering. As I turned to face them, I thought, Jeer all you want, I’m doing something you can’t do. I went through the whole song, with actions, and when I finished, everyone cheered. We went out for recess, and one of the tough boys said, You can’t sing, but you got guts, Rice, you sure got guts. It was one of the nicest things anyone had ever said to me. To this day, it still ranks as one of the nicest things.

In those days if you liked theatre, for just a few dollars you could see plays at MTC: John Hirsch directing people like Martha Henry, Len Cariou, Heath Lamberts, Powys Thomas, Leo Ciceri. I will never forget it.

Kurt Reis had a big influence on me. When I was unprepared for a scene in his class in 1983, he took a script, rolled it up, and swatted me hard on the head with it. Believe me, I got the point – prepare!

My local idols include R. H. Thomson and Marianne McIsaac.

How did you get involved with Nature of the Beast?
I spotted the audition notice in an e-mail and thought I might be able to do the part well. So I sent in my photo and résumé with a cover-letter, and got an audition-time. Three days before the audition, I took a train to Brockville. In my seat on the coach, I got out my sides and mumbled the lines. A woman across the aisle said, Excuse me, sir, who are you speaking to?   I loved this; she thought I was really speaking to someone; it was a great thumbs-up.

Your character is a kindly old man… who runs a sex dungeon in his basement. How did you approach playing that balance or hidden identity?
Not sure. Just play the kind moments kindly, the fierce moments fiercely. Like most human beings, I have ‘kind’ and ‘fierce’ and many other things, swirling around in the strange bouillabaisse that is Nick Rice.

Jakob Ehman is also nominated for a MyTheatre Award this year for playing your nephew Mike. Tell us about working with him and developing that relationship on stage.
Jake and I met for coffee a few times to run lines, but we didn’t really socialize. Most of our relationship was in the work. I loved him as if he really were my nephew – and when I saw that he liked to improvise, I started to improvise right back. There were some great moments onstage, things we created then and there. One night, in the late scenes when things were becoming violent, Jake called me Faggot! This wasn’t in Brandon’s script; it took me by surprise; yet it was so spontaneous, so right. Jake is a gutsy, brilliant man.

Do you agree with David’s assessment that the “beast” Francis becomes when faced with resistance in the basement is who he really is? Does that make his kindness towards Mike early on in the play just an act?
No, I don’t think it’s an act. Along with his baser tendencies, Francis has a great capacity for compassion and empathy. But I suppose it’s true what they say, that the membrane between civility and bestiality is paper-thin.

What would you say is the most important conversation you had with director Luke Brown in developing your interpretation of the character?
When I look back on the work with Brandon and Luke, I remember the great kindness of both men. They made us actors feel trusted, and surely this is one of the best things you can do for an actor. It took me a very long time to ‘get’ Francis. Brandon had written long rambly passages, in a kind of self-effacing, uncertain, and rural Canadian dialect, which I thought was just right for the character. There’s a banality to Francis’s speech, which Brandon elevated to high art! But try learning that stuff- “I was thinkin’ we oughta, y’know, start to think about kinda makin’ some plans”… I wanted to honour this style of talk, and it took me forever to learn it. Still Brandon and Luke were the soul of patience and encouragement. Learn it I eventually did – with their great support.

Did you have a favourite moment in the production?
I liked the scene where Francis and Mike are a bit stoned, and they’re sitting together, watching TV, reminiscing, just letting the talk wander where it will. This reminded me of the scene in Who’s Afraid of Virginia Woolf, where George and Nick are alone, and George does the famous bergin speech, and they share some late-night laughter – but, as Albee says, it’s a ‘sad laughter’. In our show, Francis urges Mike to get some sleep – then spontaneously one night I didn’t just give Jake the blanket, I threw it over his head. I knew Jake would like that. The moment felt full of love and sweetness, a very masculine kind of sweetness.

What’s your favourite role you’ve ever performed?
That’s like saying, Of all your children, which do you love most? Really you love them all. But if I had to pick a few, I’d say Roy Cohn in Angels in America; Tevye in Fiddler; Moss in Morris Panych’s The Dishwashers; Adolph in Alfred Uhry’s Last Night of Ballyhoo; and old Gregory Solomon in The Price.

Do you have a dream role you’d like to play one day?
Firs in The Cherry Orchard. I did a production of the play in Vancouver in 1977. I played Yepihodov, and a great old actor named Antony Holland played Firs. Not long ago, in the last year of his long and active life, Mr. Holland was named to The Order of Canada. I’d like to play the part, and I’d steal liberally from him (steal from the best, right?), and I’d stir in my own touches as well.

What are you working on now or next?
With Drayton Entertainment, Mr. Mushnik in Little Shop of Horrors. Rehearsals to begin in late February.

Do you have anything you’d like to add?
What an honour it is, what a major mitzvah, to act in plays. I hope never to stop.