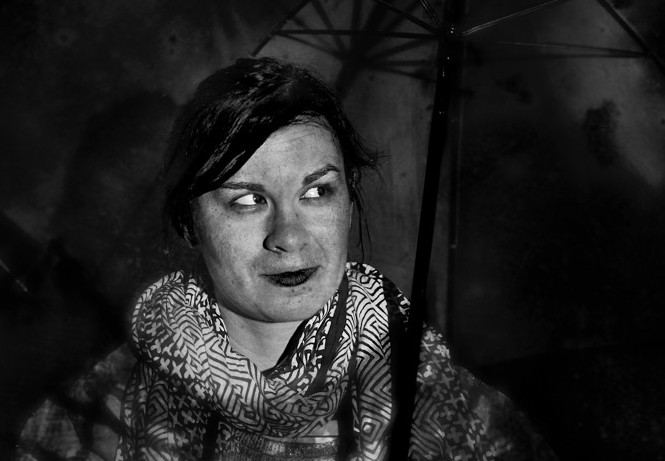 One of indie Toronto’s most prolific scenographers, Claire Hill joins the Nominee Interview Series to talk about the microbudget production that scored her her third MyTheatre Award nomination for Outstanding Design in two years- Red One Theatre Collective’s Dangerous Liaisons at the Storefront Theatre where she is now a resident designer and production coordinator.

We interviewed you last year when you were a double nominee for Retreat and Cockfight. Catch us up on what you’ve been up to since then.
I’ve been designing, mostly. I’ve managed to dig myself further in at the Storefront as one of the Resident Designers and as a Production Coordinator for the upcoming season. I’ve started going to York for my MFA in design so I could get some real mentorship. I still don’t own a cat, sadly. I know everyone was dying to know about that.

Has grad school had much of an influence on your design aesthetic or approach to a production?
I’ve only been in for one semester, but what I’ve enjoyed so far was spending almost the entire semester on the conceptual realization for the scenography of a show that will never be produced, and I’ve been sent back to the drawing board repeatedly. Having a professor who keeps me honest like that- who doesn’t pull punches, doesn’t fudge her words and really knows how to talk to me so I figure it out has been a great learning experience, because that’s not really something I’ve ever had. What it has done is free me from the budget restrictions and the reality of building my work and let me think about what I want it to be. I’ve been able to go far more conceptual than I’ve ever gone in execution before, and it’s really cool to learn to think that way.

You’ve said that the set for Dangerous Liaisons started with a bet from Storefront Artistic Director Benjamin Blais to do the entire design without spending any money. Where do you start when you know you don’t have any budget at all?
You start with alcohol- well, that’s what started the dare at least. Ben can really egg me on sometimes, and he’s got this way of riling up the troops to get the job done so that sometimes you don’t realize what you’ve agreed to until you’ve gone home, sat down and really thought about it.

So I just dug in- I had the conversation with Jakob [Ehman, the director] about intention and look, read the script, and started rustling through the basement to see what was left over from past shows and building materials. The grey fabric I had on the walls was actually Typar, which is used as insulation to wrap houses. It saved me the time and effort of a paint job and looked neat. The sofa was borrowed from Jeff Hanson. The chairs and red curtains were part of the company inventory. We had to be incredibly stingy with the production budget because we were literally doing it to make rent. I always looked at it as fun, and appreciated the uniqueness of the challenge and situation. If you look at budget like it’s the only way to get what you want you’ll drive yourself crazy trying to make anything half decent.

The world of Dangerous Liaisons is incredibly opulent. How do you fake that and make something cheap look expensive?
I think when approaching a show that has characters of financial means you have to understand that one of the classiest ways to display wealth is through restraint. We’re in a time right now where interior décor is encouraged to be restrained and tasteful, minimalistic but with personalized touches, and that often applies across income spectrums. The audience will understand that we are showing them wealth if you apply an ethos they relate to and it’ll all become sort of subliminal. We can all look at this set and those costumes and go “that’s not French!” and “That’s not neoclassical!” but if you tap into what we are currently identifying as wealth, and apply strong design principals to it, you don’t need to be historically accurate, cosmopolitan, or neoclassically oriented to inspire the audience’s own impression and conception of those things. You can get them to project their conception of wealth onto a relatively bare stage, onto what they’re seeing, and therefore accept it.

I was also able to play off of what people expected the Storefront to look like- it’s a grungy ass building from the outside, and in the winter in Toronto nothing looks good with all the slush. The lobby used to be covered in show posters so it wasn’t known for being pristine, and people were used to walking in and seeing the place just look kind of mucky. There’s no elegant way to say it but if the bar is set low it’s pretty easy to jump over it.

And you know a good can of gold spray paint can work miracles.

How much did you collaborate with director Jakob Ehman when coming up with your design? Did he give you a lot of guidance or free reign?
Collaborating with Jakob involves reading a lot of his non-verbal communication, which after 7 shows I’ve gotten pretty good at. We talked about the desire to do something opulent and beautiful, the audience arrangement, picked and stuck to a colour scheme, and then he let me do my thing. I’d come in every week, put some things up, ask how it was used or not used in rehearsal and then adjust accordingly. We went into this with no lead time, so it was just see what works the whole way. It was actually a really satisfying process. Jakob was really smart to nix a lot of props and set pieces and furniture, just go with four chairs and the chez lounge.

A lot of the freedom of the set came in the bonus time I had because we were in the space the whole time for rehearsal- so I could build all my work in the evenings after rehearsal and they’d come in every few days with a new surprise from me. I’m never really happier than when I’m alone in the theatre late at night cobbling something together

Did you have any big ideas that were edited out for practical reasons?
I thought about making the checkboard forced perspective so it would hit a vanishing point in the centre line and each audience side would have the middle as the vanishing point. Then I didn’t want to do the math.

People kept trying to suggest I hang empty gold picture frames on the wall, and I had to keep breaking out my empty pictures frames are a tired cliché rant.

If you had an unlimited budget and time and no real restrictions, what would the set have looked like?
I have no idea.

What were some of the technical challenges of executing the design?
The floor. We decided to wait until the end to do the checkerboard paint job because of all the winter sludge and salt on people’s shoes, so my timeline on that was really short, despite having had this really long pre-production time in the space.

Unfortunately, I bought the wrong glaze to go over the black and white paint treatment, and when it dried it was blue tinted, so I was mostly able to leave the black squares but had to go back to the white squares, which were now a really hideous blue, repaint them, retreat them with the marble effect, and then re-glaze them with the new glaze.

That damn glaze was the death of me. We ran pretty close to the clock in one of those classic moments where the actors were helping me paint 2 hours before the house opened on the first night. The girls all had their hair in rollers and Holly [Lloyd, the costume designer] was trying to fix dresses and shirts and half of the cast were down on the ground touching up edges, and I’m trying to make sure it gets done but that we don’t get paint on the clothes. You’ve got someone like Daniel Briere, who is playing the lead and a true trooper, and you’re like, “dude! Go get your makeup on!” and so he does and then comes back to finish the work. That’s Indie theatre.

What was your favourite design element in the set for Dangerous Liaisons?
I think I liked the way it all came together as one piece more than any single item. It’s one of those things that needs every single piece, and every piece had a place and purpose.

Were you pleased with how the design worked in practice?
One of my main goals was to make it so that when people walked in from the lobby to the theatre they felt a big change in terms of where they were and how they’d seen the Storefront look before, and I think I was successful in that. I’ve had people remark months after the show that they really liked that part of the experience of seeing it.

Do you have a favourite moment in the production?
Literally every word out of the mouth of Kat Letwin. I died every time she moved the sofa.

We had a really sweet family moment near the end of the run. One of the actors, Brenhan Mc Kibben, and his wife and founder of the theatre, Staceylee Turner, were only a few weeks away from the birth of their first child. Near the end of the run there was a show he couldn’t perform in, so Jeff Hanson had learned his lines and did the part- this was planned. What we didn’t expect was for Stacey to go into what ended up being false labour on closing night of the run, so Jeff had to step in again. Brenhan usually plays a big part in strikes so he kept saying that he’d come back to strike the show if it looked like it was false labour, but he was practically bouncing with excitement, and a nervous wreck. I think he kept saying he’d leave and then forgetting to bring something and then leaving and then coming back. We’d all been really excited about the upcoming birth of the first company baby, so there was a really happy buzz amongst the company that night. We spent strike hoping the baby would be born, but the little guy took a few more weeks after that false alarm.

What are you doing now/ what’s your next project?
These days I’m producing a bit more and coordinating the other productions coming in and out of the Storefront theatre. I learned last semester I can’t be a full time MFA student and a Scenographer and Teaching Assistant and one of production staff at Storefront and a living breathing person who has time to actually enjoy life. I’m scaling back, and only doing things that really mean something to me or pay me. I’m producing the next safeword show, CONTEMPT, and handing off my baby to the awesome hands of Rachel Forbes to do the scenography.

Come see Contempt at the Storefront Theatre from February 19th-March 6th. It stars Khadijah Roberts-Abdullah, Benjamin Blais, Marcia Johnson and Prince Amponsah and is written and directed by Brandon Crone.