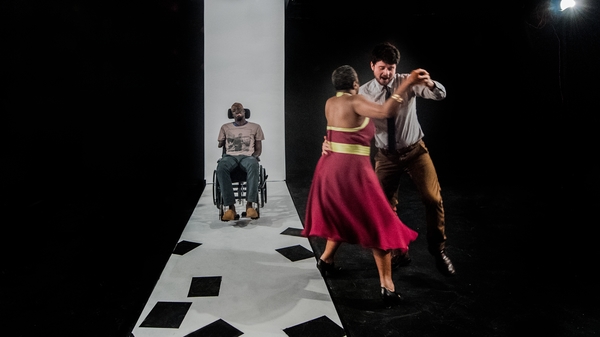 The opening scene of writer/director Brandon Crone’s latest play Contempt features a great Louis CK routine in which he proclaims that the concept of “there’s someone for everyone” is bullshit. It’s a sad, true, maddening fact that provides an insightfully misleading frame for a story about sex surrogacy for the disabled. We begin with Tara (Khadijah Roberts-Abdullah harnessing that elusive nurturing calm that seems unique to therapists), a sexologist embarking on her first contract as a surrogate partner for Freddie, a young man completely paralyzed with only the use of his eyes for communication. We also meet Freddie’s overbearing mother (captured with pitch-perfect irritation and understanding by Crone but played with dreadful pacing by Marcia Johnson) and Tara’s discontent underachiever of a boyfriend Ryan.

The easy assumption is that the title and that Louis CK quote are meant to apply to double amputee Prince Amponsah who plays Freddie with valiant determination despite being intensely limited in his ability to communicate (the entire performance is breathing and blinking and thus difficult to see no matter how smartly blocked the scene is) and there is certainly a way to read the magical ending that concurs with the (sadly realistic) notion that Freddie will never really be loved by anyone besides his mother. I read the ending (a stirring scene that would quadruple in its impact if the definitely-not-paralyzed actor couldn’t be seen running into place during blackouts earlier in the play) as pure fantasy, though that cynical interpretation is not definitive despite its feeling of inevitability from the moment you hear the play’s premise. Maybe it’s a fantasy (whose, we’re not quite sure, though a sappy and unnecessary final speech gives a suggestion), maybe it’s a half-truth, maybe dreams really do come true and things that can’t happen are happening- this is a Crone play, there is no right, and certainly no easy, answer.

If you choose to believe in magic, then the Louis CK bit no longer applies, at least not to Freddie. Enter Benjamin Blais in a viking helmet, delivering the sort of complex, hilarious, show-stealing “I’m Kanye, bitch” performance that makes unfamiliar audience members say “who IS that guy?” (this literally happened at intermission). Dancing around designer Rachel Forbes’ half-excellent, half-confusing set, Blais’ Ryan is goofy and clever- at first glance, someone for whom there is definitely someone. As the play moves forward and you realize that the real drama is playing out slightly to the left of where you’ve been looking, somewhere near the comic relief, Ryan starts to unravel. He takes a wrong step, then another, knowingly walking away from the man he wants to be but unable to stop himself, until he reaches a point where all the charisma in the world can’t do him any good.

In his “someone for everyone” routine, Louis CK asserts that some people will never find someone because they are “lightspeed ugly”. In our harsh, jaded, un-empathetic world, someone as graceful, proud and emotive as Freddie (expressed best by Amponsah in his single unleashed moment) might be called such a thing and, more than likely, could live his entire life untouched. But, with the unevenly brutal, often silly and ultimately beautiful Contempt, Brandon Crone reminds us that there’s more than one way to be ugly.