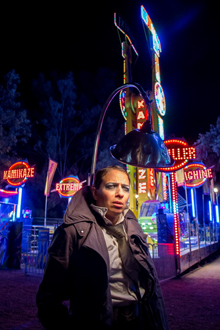 Butt Kapinski (A)
Deanna Fleysher’s one-person show is a parody of both the figure of the private eye and film noir. She has crafted a comedic mystery that is built on her excellent characterization, audience improvisation, and a choose-your-own-adventure type structure to the plot, where at certain junctures various audience members are called on to choose A or B, to take the show in one direction or another. Fleysher carries the show with a charisma that I haven’t seen in many actors, and has the entire room in the palm of her hand. She manages to connect with us almost immediately, and though nervous at first, the audience quickly warms to her suggestions and requests, and by the end we are a community, eager to jump in when needed. This show is not just interesting and funny, it’s one of the best community-building exercises I’ve ever taken part in. I was entertained but also in awe: Fleysher is a performer on a whole other level.

Magical Mystery Detour (A)
Gemma Wilcox’s one-woman show is part of a series in the life of Sandra, and this particular story depicts the aftermath of her mother’s death, in which she takes a trip according to the wishes outlined in her mother’s will. Recently dumped by her beau, Charlie, she embarks on the journey on her own, unsure if she’s up to the task logistically, emotionally, and existentially. Wilcox plays about 20 characters over the course of the hour, from her aunt to her ex to strangers she meets and even her beloved dog and a pesky fly. There’s a bit of audience participation that the show might be stronger without, but overall the story is one of the most captivating shows I’ve seen at the festival this year – the hour flies by as we watch Sandra struggle through various conflicts and dilemmas, and Wilcox in her fabulous talent for characterization gives us a robust world, full of funny, interesting, and at times highly emotional interactions.

Nourishment (A-)
A collective creation by EMC Theatre, this show explores the complexity of intergenerational female relationships, and how those relate to our ideas of womanhood in general, and ourselves. The cast work great together as an ensemble, depicting a core narrative of a family – a grandmother, her two granddaughters, and their aunt interspersed with scenes of different scenarios where, for example, women confess their experiences of being cat-called. The main story traverses key moments in the women’s lives, from figuring out how to use a diva cup (pretty complicated) to sexual frustration in long-term marriages, to the politics of care at the end of one’s life. There’s a theme of inheritance, though it’s unclear why that needs to be something that happens through traditional structures. What about single-parent families, families that take in foster kids, adopt kids, what about our chosen families as adults? It’s not obvious that there is something about genetic inheritance that deserves special treatment. Aside from that particular choice, though, the show is interesting, touching, and extremely funny.