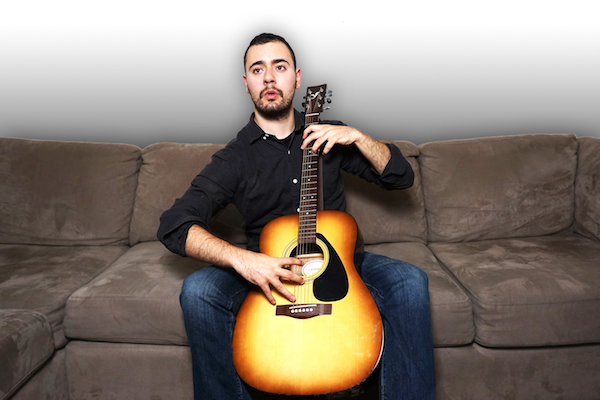 Songs for a New World Order (A-)
As much as I didn’t like his sketch revue And Then It Happened, I loved Anesti Danelis’ solo show. Alone on stage with just his natural presence, a handful of funny stories, a guitar and a great voice, Danelis is goofily charming and self-deprecatingly hilarious as he works his way through a series of comedic songs that skewer both the state of the world and those who are freaking out about it (“Where Did the Love Go?” he asks in both the opener and closer, listing ways in which people acted totally normally towards their fellow man). If musical comedies are your thing, Songs for a New World Order will surely delight you as it did me.

Dear Uncle Wish (B+)
There are lots of moments of enchanting tenderness in playwright/producer/composer/performer Samantha Chaulk’s new play about a “charmer” in 1950s Newfoundland and the people who turn to him for help, a story based on Chaulk’s own family. Some of the vignettes about the charm recipients need a good trim and the transitions could certainly be shored up but this play has a big ole heart that can’t be denied, highlighted by Jamie Johnson’s beautifully sincere turn as the titular do-gooder.

Lover Lover (B+)
The idea of this site-specific show about a man who confronts his girlfriend’s girlfriend in a café is sound and the performers (Elizabeth Adams and Erik Mrakovcic) are both very compelling but the writing is fairly tropey, full of unnecessary contemporary references that make it already sound a bit dated. Trump, Drake, mansplaining, polyamory- it plays like a scroll through a standard liberal millennial’s facebook feed. The play makes some good points but it doesn’t say anything we’re not all always hearing.

The Fateful Agenda (B)
This charming but rocky little show is really more of a cabaret-style play about dancers than it is an actual dance show. The dancing isn’t terribly complicated and the performers range from “pretty good dancer” to “really not a dancer, why is he dancing?” but it’s fun and unassuming and the audience at our late-night performance connected quickly and strongly to amiable host Gary Lucich, revelling in the show’s participatory community feeling rather than hiding in the usual audience participation fear.

Operation SUNshine (B)
Jennifer McKinley’s solo show about finally removing the pictures of naked women her father’s old tenant taped to the walls of his basement bathroom over 20 years ago has a lot of good ideas but a scattered structure that doesn’t follow fully through on many of those good ideas. Partly examining the news stories that appeared on the reverse side of each woman’s photo, partly theorizing on the women themselves and the archetypes she believed them to be, and partly just a standard multi-character retelling of her own childhood, McKinley spreads herself too thin but hints at plenty of good things.

Olive Copperbottom (B-)
While Penny Ashton’s high-energy accent-hopping performance is certainly a sight to see, there are times in this one-woman musical where you feel as if you’re watching the absurd one-woman show characters might sit through in a sitcom. It’s silly, makeshift, and showy at the same time, a faux-Dickensian tale with none of the storytelling thrust or emotional investment of real Dickens. It’s impressive, it’s just not compelling.

The Teeny Tiny Music Show (B-)
The (spoiler alert, I guess) full band that accompanies Hayley Pace in this wacky, cutesy, site-specific account of a terrible relationship that won’t go away is a lot of fun. Their arrival is supposed to be a big surprise and that moment does have a certain thrill to it but it’s their hyper-enthusiastic presence throughout the show that elevates what otherwise feels like a play Kirsten Dunst’s character in Elizabethtown might put on because she’s So! Adorably! Quirky!

Everything There Is To Know (C+)
This trite family musical should probably be part of KidsFest. It leans too heavily on its lessons and lacks sophistication in both its musical construction and storytelling but it has a nice heart and kids might appreciate its earnest silliness. Quinn Dooley does an admirable job in the leading role of a young girl whose family life is falling apart but none of the other performers do much to set this flawed piece on a better track.