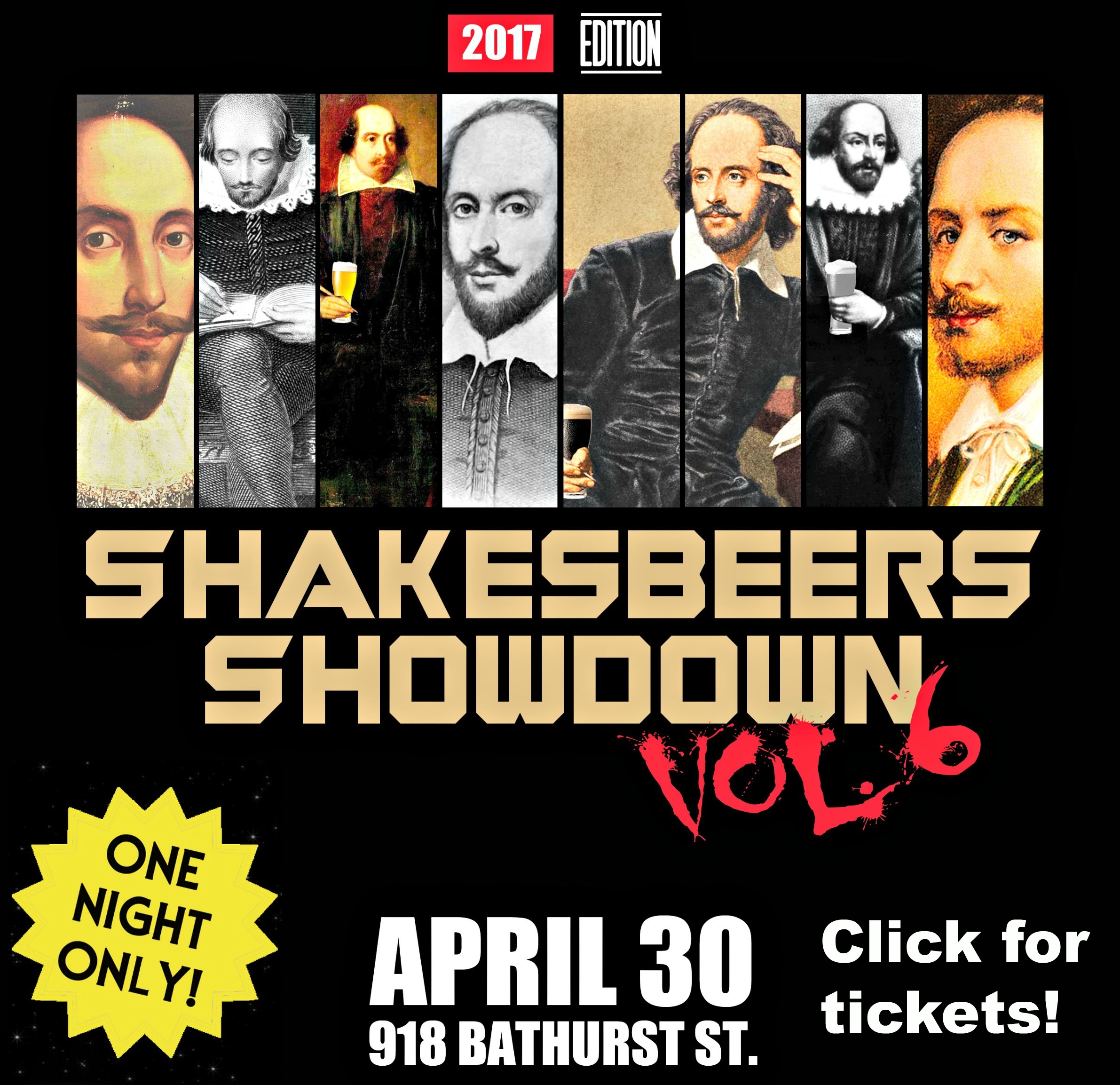 I’ve never placed a sports bet in my life but, ask me about Spur-of-the-Moment Shakespeare Collective’s annual fundraiser where Toronto indie companies go head to head reading the first folio while getting progressively drunker, and I turn into Benny Southstreet.

The odds-on favourite has to be Ale House‘s Joshua Stodart based on past performance and company mandate (Ale House is scholarly and text-focused, compared to, say, the Wolf Manor pack who tend to do more physical work with heavily cut scripts, or Shakey-Shake who perform kid-friendly adaptations that obviously emphasize accessibility over accuracy). But Dauntless City Theatre‘s Scott Moyle is tired of his annual silver medal and might have the drive to finally get it done this year. Scott’s probably the momentum pick, though there’s no safe bet against either Ale House competitor, not to mention past winners Shakespeare in the Ruff or host company SOTMSC.

Though precedent suggests a predictable boot order (clowns out first, scholars go for gold), what of these new “style points” Spur Artistic Director/Showdown Host Torey Urquhart has hinted at? Will a twist in the rules disarm the serious frontrunners and make a path for showmanship-heavy challengers? How will the presence of musical performers (the LOT is competing this year) alter the field of classical purists? Will the newly created “audience team” come together to win the day? And what part will live “sports commentary” from Kat Letwin and Scott Garland play on the mental game? I’m not saying let’s start a betting pool, but let’s start a betting pool.

The Showdown goes down at 918 Bathurst on April 30th. Doors at 6, Competition at 7. Get your tickets HERE.

At whom do you bite your thumb and why?

DB: Spur. They have a hostage. We want our beasts back.

TM: I actually physically can’t bite my thumb, as it is all that is working my jaw… if I were to bite it, I’d have to have first undergone a horrifying Cronenburg-style transformation. But then? Marlowe. I know he’s on my team, but still. Marlowe.

SM: Wolf Manor, because as wolves they lack thumbs to bite back. Gotta get ’em where it hurts.

JD: I bite my thumb at the LOT for stealing our puppet act.

Have you done the showdown before? If so, how did you place?

TM: I have participated many times now – I like to imagine I’m first in the audiences’ heart, even though I’m often last in the standings.

JD: I competed last year. I made it to the Fools Round. I can’t remember who won. The other puppet in the fools round was also a Shakey-Shake character so it didn’t matter.

Do you have any signature moves?

JD: I compete with a big, purple, homemade Christopher Marlowe puppet on my arm – Any signature move on top of that is redundant.

TM: My best move is, of course, my Shakey-Shake-Shake. The extra Shake is for when I’m actually shaking. Usually in rage at something Marlowe did. It’s as hilarious as it is effective.

DB: We bleed people out. We go straight for the throat, with our teeth.

Is there anyone you plan on using said signature moves on?

DB: We’re going for Scott Moyle at Dauntless. He looks like he could fight off a wolf with his manly beardy face. We like a challenge.

TM: If there’s one thing I’ve learning in my years of being a puppet, it’s that puppet antics are equal parts distracting and hilarious. I intend to use both to throw my opponents off their more studied game. After all, if you can’t beat ’em, entertain ’em.

Who do you think will go down in the first round and why?

JD: I think Matt Shaw is going down in the first round cause he totally sucks. Trust me, I worked with him once on a student film and it was probably the single worst experience of my life. He’s super sucky.

DB: I make no bets. But Christopher Marlowe may show up again. That jerk acts like he wrote the damn things.

SM: There’s always that one dude (and it’s always a dude) who shows up overconfident and underprepared. It’s someone different every time, and it’s always a joy to see them realise how utterly boned they are.

Who do you think you will see in the final round and why?

JD: Well it’s a well-known fact that Christopher Marlowe faked his death and continued to write under the name of Shakespeare. So it only makes sense that I make it to the final round since I’m Marlowe and Marlowe is Shakespeare.

TM: Joshua Stodart has been a longtime winner and key competitor, but that just means he’s got a bigger target painted on his onesie. But that’s implying I’ll be able to see by the final round. It is called Shakesbeers after all!

SM: This year’s final round will be Jordin Hall and I in a highly enjoyable Dauntless-on-Dauntless exhibition match.

Who do you hope to go beer-to-beer with?

SM: I really enjoyed taking on AJ Richardson- I think we’re tied one-one, and we should really finish things up. I’m also hoping to face a Shakey-Shake puppet this year- it’s a whole different game when you lock eyes with the unblinking eyes of a felted foe.

DB: We wanna see where things can go. But Shakey Shakey clapped us hard and we want to put hose squishy jerks in their place.

TM: Marlowe – in the competition as we are in life, Marlowe (and his butler, Jeff Dingle) are some of my favorite companions to raise a brew with and too. The good news is, we’ll get to do that either way!

JD: I want to go head to head with Tom McGee/Shakey-Shake. Frankly because he’s the only contender who really matters to me… because I love him…